"Every Day The World Grows Noisier; I, For One, Will Have No Part In That Increasing Clamour"

I have written before in praise of idleness.  One of my favorite apostrophes to idleness appears in George Gissing's The Private Papers of Henry Ryecroft:

"More than half a century of existence has taught me that most of the wrong and folly which darken earth is due to those who cannot possess their souls in quiet; that most of the good which saves mankind from destruction comes of life that is led in thoughtful stillness.  Every day the world grows noisier; I, for one, will have no part in that increasing clamour, and, were it only by my silence, I confer a boon on all."

This is an elaboration of Pascal's famous dictum:  "I have often said, that all the Misfortune of Men proceeds from their not knowing how to keep themselves quiet in their Chamber."  Blaise Pascal, Pensees (translated by Joseph Walker) (1688).

Alas, those who wish to change the world -- politicians, social engineers, media mouthpieces, and their ilk -- are unlikely to read, much less take heed of, Pascal and Gissing.  Thus, the rest of us must do our best to mitigate the Sisyphean antics and the noisy noisomeness of these busybodies by keeping our wits about us and by remaining idle and quiet. 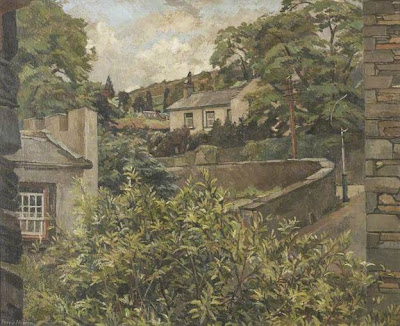 Mind you, we shouldn't confuse idleness with inactivity or lassitude, as Andrew Young points out.  One must be vigilant and attentive in order to be idle.

God, you've so much to do,
To think of, watch and listen to,
That I will let all else go by
And lending ear and eye
Help you to watch how in the combe
Winds sweep dead leaves without a broom;
And rooks in the spring-reddened trees
Restore their villages,
Nest by dark nest
Swaying at rest on the trees' frail unrest;
Or on this limestone wall,
Leaning at ease, with you recall
How once these heavy stones
Swam in the sea as shells and bones;
And hear that owl snore in a tree
Till it grows dark enough for him to see;
In fact, will learn to shirk
No idleness that I may share your work.

A side-note: "Nest by dark nest/Swaying at rest on the trees' frail unrest" is particularly nice, I think. 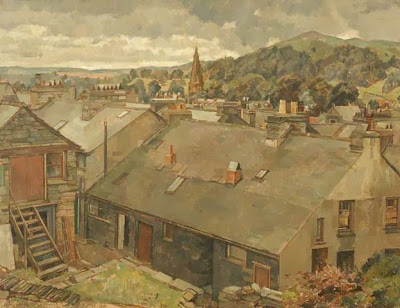 Indeed, idleness is an essential element of a well-lived life, as pointed out by Kathleen Raine in the following untitled poem.

Your gift of life was idleness,
As you would set day's task aside
To marvel at an opening bud,
Quivering leaf, or spider's veil
On dewy grass in morning spread.
These were your wandering thoughts, that strayed
Across the ever-changing mind
Of airy sky and travelling cloud,
The harebell and the heather hill,
World without end, where you could lose
Memory, identity and name
And all that you beheld, became,
Insect wing and net of stars
Or silver-glistering wind-borne seed
For ever drifting free from time.
What has unbounded life to do
With body's grave and body's womb,
Span of life and little room? 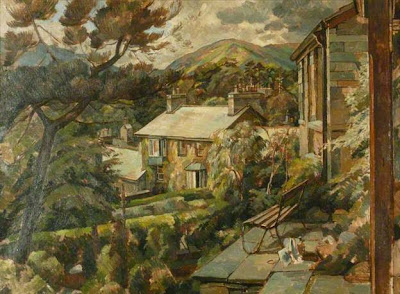 just to let you know i have been diving in every few days, and revelling in the poems, the paintings, and your comments, that never fail to bring delight to my life.

In March of 1819 Keats wrote to his brother and sister-in-law and told them that he found himself "in an indolent and supremely careless" mood. He adds that "Neither poetry nor ambition, nor Love have any alertness of countenance as they pass by me." He says the three--Love, Ambition, and poetry--seem to him like figures on an urn. He says that this deep indolence enveloping him "is the only happiness and is a rare instance of advantage in the body overpowering the mind."

Not long after he wrote the letter, he wrote "Ode on Indolence." (It is pasted below.)

Of course the irony is that the mind would write a poem about it's momentary surrender to the body. Besides, one knows Keats knew that he, nor anyone else, could "shelter" himself "from annoy." And his horrible end would prove just how much the body can overpower the mind.

And yet, as the magic of poetry can sometimes do in its mysterious legerdemain, the reader of the poem, if just for the brief interim, finds himself not "know[ing]how change the moons, / Or hear the voice of busy
common-sense."

Ode On Indolence
ONE morn before me were three figures seen,
With bowed necks, and joined hands, side-faced;
And one behind the other stepp'd serene,
In placid sandals, and in white robes graced;
They pass'd, like figures on a marble urn,
When shifted round to see the other side;
They came again; as when the urn once more
Is shifted round, the first seen shades return;
And they were strange to me, as may betide
With vases, to one deep in Phidian lore.

How is it, Shadows! that I knew ye not?
How came ye muffled in so hush a masque?
Was it a silent deep-disguised plot
To steal away, and leave without a task
My idle days? Ripe was the drowsy hour;
The blissful cloud of summer-indolence
Benumb'd my eyes; my pulse grew less and less;
Pain had no sting, and pleasure's wreath no flower:
O, why did ye not melt, and leave my sense
Unhaunted quite of all but---nothingness?

A third time came they by;---alas! wherefore?
My sleep had been embroider'd with dim dreams;
My soul had been a lawn besprinkled o'er
With flowers, and stirring shades, and baffled beams:
The morn was clouded, but no shower fell,
Tho' in her lids hung the sweet tears of May;
The open casement press'd a new-leav'd vine,
Let in the budding warmth and throstle's lay;
O Shadows! 'twas a time to bid farewell!
Upon your skirts had fallen no tears of mine.

A third time pass'd they by, and, passing, turn'd
Each one the face a moment whiles to me;
Then faded, and to follow them I burn'd
And ached for wings, because I knew the three;
The first was a fair maid, and Love her name;
The second was Ambition, pale of cheek,
And ever watchful with fatigued eye;
The last, whom I love more, the more of blame
Is heap'd upon her, maiden most unmeek,---
I knew to be my demon Poesy.

They faded, and, forsooth! I wanted wings:
O folly! What is Love! and where is it?
And for that poor Ambition---it springs
From a man's little heart's short fever-fit;
For Poesy!---no,---she has not a joy,---
At least for me,---so sweet as drowsy noons,
And evenings steep'd in honied indolence;
O, for an age so shelter'd from annoy,
That I may never know how change the moons,
Or hear the voice of busy common-sense!

So, ye three Ghosts, adieu! Ye cannot raise
My head cool-bedded in the flowery grass;
For I would not be dieted with praise,
A pet-lamb in a sentimental farce!
Fade softly from my eyes, and be once more
In masque-like figures on the dreamy urn;
Farewell! I yet have visions for the night,
And for the day faint visions there is store;
Vanish, ye Phantoms! from my idle spright,
Into the clouds, and never more return!

anj: I'm delighted to hear from you again -- it's been a while. I'm happy to know that you're still stopping by. Thank you very much for the kind words. As always, it's good to hear your thoughts.

Anonymous: thank you very much for the Ode, which I had neglected to think of in this connection. It is right on point. I agree with your suggestion that Keats knew that this poem was a sort of unrealistic daydream. The whole thing does seem to be a bit tongue-in-cheek, doesn't it? Still, being "shelter'd from annoy" and out of earshot of "the voice of busy common-sense" isn't such a bad dream after all.