When I was young -- and innocent of both the world of agriculture and the world of vegetables (as I still mostly am) -- I believed that a "swede" was someone who hailed from Sweden.  Eventually, my ignorance was dispelled when I came across the following poem by Edward Thomas:

They have taken the gable from the roof of clay
On the long swede pile.  They have let in the sun
To the white and gold and purple of curled fronds
Unsunned.  It is a sight more tender-gorgeous
At the wood-corner where Winter moans and drips
Than when, in the Valley of the Tombs of Kings,
A boy crawls down into a Pharaoh's tomb
And, first of Christian men, beholds the mummy,
God and monkey, chariot and throne and vase,
Blue pottery, alabaster, and gold.

But dreamless long-dead Amen-hotep lies.
This is a dream of Winter, sweet as Spring.

"Tender-gorgeous" (line 4) is a wonderful combination.  The scene reminds me of another poem by Thomas set in the same time of year, in which Winter also makes an upper-cased appearance.

Over the land freckled with snow half-thawed
The speculating rooks at their nests cawed
And saw from elm-tops, delicate as flower of grass,
What we below could not see, Winter pass. 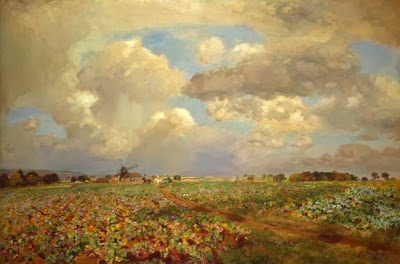 I soon discovered that (1) "swede" derives from "Swedish turnip," and (2) a swede is a rutabaga.  And then things fell nicely into place:  my Minnesota-born, Swedish-descended grandmother always put rutabagas in her vegetable soup, and, strangely enough, they were my favorite part of the soup (not that the rest wasn't delicious -- it was).

Since that time, I have become a connoisseur of swede poems. Subsequently, I came upon this.

Who can tell his years, for the winds have stretched
So tight the skin on the bare racks of bone
That his face is smooth, inscrutable as stone?
And when he wades in the brown bilge of earth
Hour by hour, or stoops to pull
The reluctant swedes, who can read the look
In the colourless eyes, as his back comes straight
Like an old tree lightened of the snow's weight?
Is there love there, or hope, or any thought
For the frail form broken beneath his tread,
And the sweet pregnancy that yields his bread? 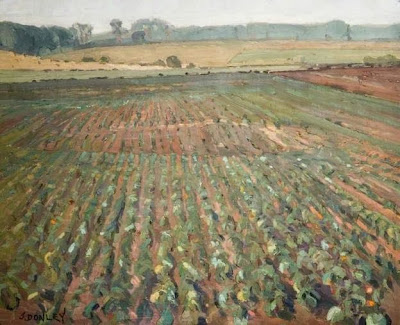 Later, I discovered this poem by Andrew Young.

Three that are one since time began,
Horse, cart and man,
Lurch down the lane patched with loose stones;
Swedes in the cart heaped smooth and round
Like skulls that from the ground
The man has dug without the bones
Leave me in doubt
Whether the swedes with gold shoots sprout
Or with fresh fancies bursts each old bald sconce.

Young is a closely-observant and painstakingly accurate "nature poet." However, part of the charm of his poetry is that he often comes up with the sort of startling image that appears in the final line of the poem.  I am reminded of "The Shepherd's Hut," which is about laundry flapping in the wind on a clothes-line.  It ends with these lines about the shepherd's wife: "She little knows/That ghosts are trying on her children's clothes."  Very nice, I think. 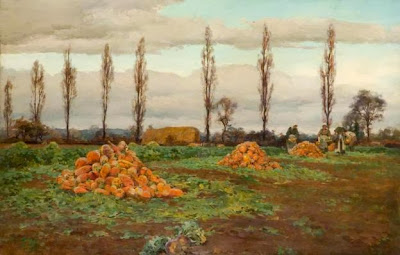 How beautiful, thank you for this superb collection!
These are all poems new to me, wonderful.

May I use the first one on my blog, please?
I would put a link to yours, of course.

Merisi: I'm pleased to hear from you again. Thank you for the kind words. Of course you are free to use anything from the blog. I appreciate your doing so.

Ms. Ahearn: Ah, you have anticipated me! You may be aware of Hardy's poem "We Field-Women," which is based upon Tess's time at Flintcomb-Ash. I plan to use it in a future post. I'm pleased you thought of the same thing.

Thank you for sharing some of my favourite poems by Edward Thomas. We have in recent times, "enjoyed" Winter moaning and dripping. Now it freezes instead! Would that we were nearer the time of seeing Winter pass.

I for one am glad you have a liking for poems about Swedes. The R S Thomas one is new to me but very evocative.

Bovey Belle: thank you for stopping by again. Yes, the poems are more for the spring, aren't they? No thaw in sight for a while. As for R. S. Thomas: I think, for all of his grumpiness, he did have sympathy for those to whom he ministered. At any rate, he was attentive to their lot, and depicted it honestly.