Is the primary office of poetry to remind us of our mortality?  I sometimes think so.  My thought is prompted by my continued meanderings through ancient Greek verse, where one comes across lines such as these:

Alas and alas, when the mallow dead in the garden lies,
Or the pale-green parsley withers, or the lush-curled anise dies,
Yet they rise anew and quicken when spring returns again.
But we the strong, the mighty, the wise, we sons of men,
When we die and the earth is o'er us, ah then how long, how deep,
Unhearing, unawaking, night without end we sleep!

Anonymous (2nd century B. C.) (translated by F. L. Lucas), in F. L. Lucas, Greek Poetry for Everyman (J. M. Dent 1951), page 332.  The lines are from "Lament for Bion."  The poem was formerly attributed to Moschus.  However, after it was discovered that Moschus antedated Bion, the poem is now attributed to an unknown poet who may have been a follower of Bion.

Here is an alternative translation of the same lines:

Alas, when mallow in the garden dies,
Or parsley green or crinkled anise dear,
They live again, they rise another year:
But we, the tall, the mighty and the wise,
Once dead, beneath the hollow ground must keep
A long dumb changeless unawakening sleep.

The passage from "Lament for Bion," though unsparing in its message, arguably has a reassuring aspect to it:  the mallow, the parsley, and the anise will return to blossom again; hence, our fate unfolds within a larger context, which we ought to bear in mind.  As I have noted here in the past, the thought that the seasons will continue to come and go after we have returned to the dust can be a source of equanimity and serenity (or so it is for me, at least).

The epigrams on our mortality in The Greek Anthology tend, on the whole, to withhold consolation.  For instance:

Life is the fool of hope, till one last morning
Sweeps all our schemes away, without a warning. 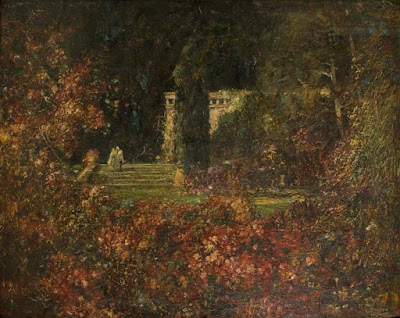 On the other hand, I am perfectly willing to consider an alternative: Is the primary office of poetry to remind us of the joy of living an evanescent life?  Joy.  Not mere happiness (a misused and delusive chimera).  One can be miserable, even in despair, and still experience joy.  "The word 'joy.'  Take the time to think about this word.  I'm surprised that it suddenly comes back to me."  Philippe Jaccottet (translated by Tess Lewis), notebook entry (May of 1979), in Philippe Jaccottet, Seedtime: Notebooks 1954-1979 (Seagull Books 2013), page 336.

Cool waters tumble, singing as they go
Through appled boughs.  Softly the leaves are dancing.
Down streams a slumber on the drowsy flow,
My soul entrancing.

Most of Sappho's poetry comes to us in fragments.  Thus, the lines translated by T. F. Higham are all that remain of a poem that has otherwise vanished.  But there is something both apt and affecting in the joy embodied in the beautiful particulars of the fragments.  Such small beauties are what we are most likely to encounter in our day-to-day, quotidian, commonplace life.  (Mind you, as I have noted here in the past, I never use the words "quotidian" or "commonplace" in a pejorative sense.)  "We live in a constellation/Of patches and of pitches."  (Wallace Stevens, "July Mountain.")  Fragmentary, momentary beauty.

Sit all beneath fair leaves of spreading bay,
And draw sweet water from a timely spring,
And let your breathless limbs, this summer day,
Rest, in the west wind's airy buffeting.

Just as a thread of mortality runs through ancient Greek verse, so does a thread of joy.  An evanescent joy, yes.  Yet a timeless joy as well.  A joy shot through with eternity.

I fear I am wandering too far afield, but consider this:  "If thou shouldst live three thousand years, or as many myriads, yet remember this, that no man loses any other life than that he now lives; and that he now lives no other life than what he is parting with, every instant."  Marcus Aurelius, Meditations, Book II, Section 14, in Francis Hutcheson and James Moor (translators), The Meditations of the Emperor Marcus Aurelius Antoninus (1742).  Or, looked at from a different angle:  "If by eternity is understood not endless temporal duration but timelessness, then he lives eternally who lives in the present."  Ludwig Wittgenstein, Proposition 6.4311, Tractatus Logico-Philosophicus (1921) (translated by C. K. Ogden).

But let us return to the beautiful particulars, and to joy:

Ah, what joy
Can out-joy this -- to reach the land -- and then,
Safe-lodged, with happy drowsing sense to hear
The raindrops pattering on the roof outside!

Sophocles (5th century B. C.) (translated by Walter Headlam), in T. F. Higham and C. M. Bowra (editors), The Oxford Book of Greek Verse in Translation, page 383.  The lines are from Tympanistae, a play by Sophocles that has been lost, save for a few fragments. Headlam's translation of the lines first appeared in A. C. Pearson (editor), The Fragments of Sophocles, Volume II (Cambridge University Press 1917), page 264. 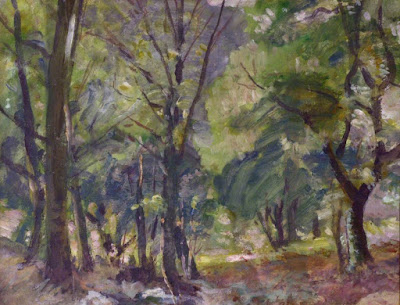 In my part of the world, nearly all the leaves have fallen.  Bare branches clack and creak in the wind.  The sun sets earlier and earlier.  Out on a late afternoon walk this week, I felt that the World was a bit diminished.  But, as I emerged out of a dark wood, I suddenly saw the white moon, waxing gibbous, in the pale blue eastern sky.

The thread of mortality and the thread of joy are intertwined.  And wondrously so.  In life and in poetry.

Come to think of it, a third alternative now occurs to me:  Is the primary office of poetry to remind us to live each day of our life with gratitude? 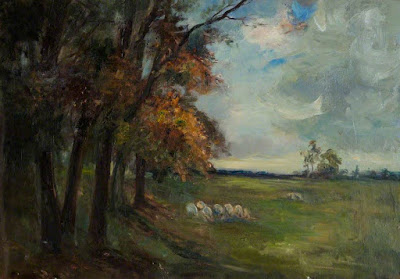