There is something to be said for paring life down to a handful of precepts.  After all, the work has already been done for us over thousands of years by those who are far wiser than us.  It is a matter of tracking the precepts down and trying them on for size.  I have discovered that the winnowing process becomes easier the older one gets:  the ever-present matter at hand tends to focus one's attention.

While this winnowing of precepts goes on, I intend to spend as much time as possible walking, and idling, beneath trees.  When not beneath those innumerable beautiful trees, I shall be reading poems. All the while (whether beneath trees or not beneath trees) I hope to be in a state of reverie, blissfully absent from the modern world.  But I know full well that nothing will go according to plan, particularly the denouement of the ever-present matter at hand.

Speaking of the ever-present matter at hand, here is a fine precept with which to begin:  "Undertake each action as one aware he may next moment depart out of life."  Marcus Aurelius, Meditations, Book II, Section 11 (translated by Francis Hutcheson and James Moor, 1742).  Or, translated differently:  "Manage all your actions and thoughts in such a manner as if you were just going to step into the grave."  (Jeremy Collier, 1701.)  Collier's version has a nice piquancy, and is both affecting and lovely.

This advice is neither doleful nor terrifying.  Quite the opposite: it reminds us that the possibility of joy is present in each moment.  Why not live?  The commonplace is never commonplace.

Encountering Snow, I Spend the Night
with a Host on Lotus Mountain

Evening,
Deep in green mountains.
The weather is cold,
This thatched hut is poor.

Out at the gate
Of rough brushwood
A dog barks.
Someone comes home
On this night
Of wind and snow. 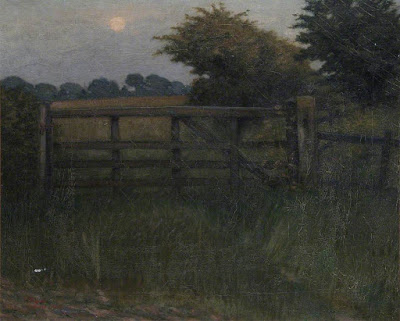 Anonymous, "A Field Gate in Moonlight"

"Manage all your actions and thoughts in such a manner as if you were just going to step into the grave."  If we pay heed to this precept, each moment becomes a miracle.  Consider Liu Ch'ang-ch'ing's poem.  Snow falls.  A thatched hut in green mountains.  A dog barking by a gate.  Out in the night, a stranger returns home.  After reading the poem, someone might say:  "Nothing happens."  Or:  "So what?"

I would say:  "Liu Ch'ang-ch'ing has presented us with a miracle." This leads to another precept:  "There are, indeed, things that cannot be put into words.  They make themselves manifest.  They are what is mystical."  Ludwig Wittgenstein, Tractatus Logico-Philosophicus, Proposition 6.522 (italics in the original) (1921) (translated by David Pears and Brian McGuinness, 1961).  An alternative translation: "There is indeed the inexpressible.  This shows itself; it is the mystical."  (Translated by C. K. Ogden, 1922.)

Liu Ch'ang-ch'ing, like all poets, must rely upon words.  In doing so, he has created a thing of beauty.  But a beautiful poem is a finger pointing at the moon (to borrow a phrase from Buddhist thought).  I would not wish to live without all of these beautiful poems.  Yet there is more in each moment, more in the World.

There was that headland, asleep on the sea,
The air full of thunder and the far air
Brittle with lightning; there was that girl
Riding her cycle, hair at half-mast,
And the men smoking, the dinghies at rest
On the calm tide.  There were people going
About their business, while the storm grew
Louder and nearer and did not break.

Why do I remember these few things,
That were rumours of life, not life itself
That was being lived fiercely, where the storm raged?
Was it just that the girl smiled,
Though not at me, and the men smoking
Had the look of those who have come safely home? 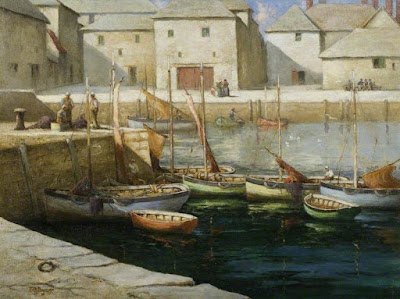 So.  At each moment, we stand at the edge of the grave, surrounded by miracles that cannot be put into words.  What shall we do?  Live. With gratitude.  A third precept comes to mind:  "Do not seek to have everything that happens happen as you wish, but wish for everything to happen as it actually does happen, and your life will be serene." Epictetus, The Enchiridion, Section 8 (translated by W. A. Oldfather, 1928). 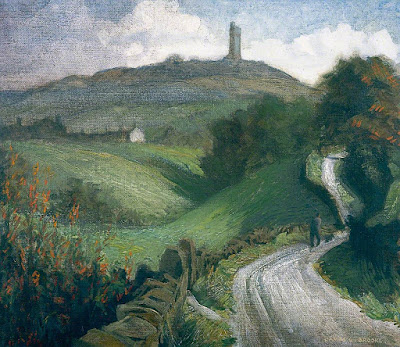 The snow began to fall yesterday afternoon.  It fell into the night.  It fell through the night.  This morning, the World was transformed.  A north wind swept down the street, through the trees, and across the dark, white-capped waters of Puget Sound.  Late in the day, the sky cleared a bit, and the horizon at sunset was a narrow strip of dull yellow beneath a grey cloud ceiling.

Snow is rare in this land of unremitting mist and drizzle.  When it arrives, this poem usually comes first to mind:

From a thousand hills, bird flights have vanished;
on ten thousand paths, human traces wiped out:
lone boat, an old man in straw cape and hat,
fishing alone in the cold river snow. 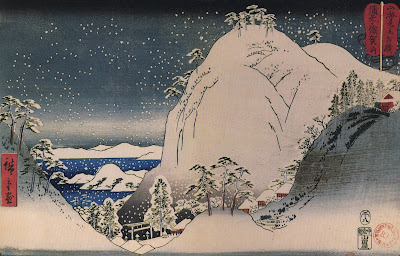 I am a creature of habit, and thus the following poem by Robert Frost (not "Stopping by Woods on a Snowy Evening," which I am indeed quite fond of) invariably appears next:

Snow falling and night falling fast, oh, fast
In a field I looked into going past,
And the ground almost covered smooth in snow,
But a few weeds and stubble showing last.

The woods around it have it -- it is theirs.
All animals are smothered in their lairs.
I am too absent-spirited to count;
The loneliness includes me unawares.

They cannot scare me with their empty spaces
Between stars -- on stars where no human race is.
I have it in me so much nearer home
To scare myself with my own desert places.

Of course, Robert Frost being Robert Frost, there is a great deal more afoot here than a bucolic snow scene.  But what brings the poem back to me when snow begins to fall are memories of my childhood in Minnesota -- the early 1960s, when we had real snowfalls (says the aging man):  snow that often began to fall at twilight (or so it seems in selective memory), and fell and fell and fell, unceasing, as we slept. "Snow falling and night falling fast, oh, fast."  Exactly. 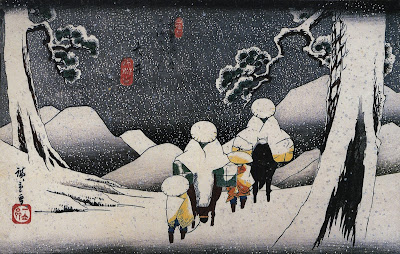 Utagawa Hiroshige, "Travellers on Horseback in the Snow"

The feeling of those snowy Minnesota twilights and nights was one of peace and tranquility, not dread.  No loneliness; no "empty spaces;" no "desert places."  This has never changed for me.  I lived in Tokyo from 1993 to 1994.  While I was there, I experienced a snow storm in February of 1994.

And so at last it has come.  Quietly.
Has quietly come and changed everything.
This, as we watch, is what we always say:
"It changes everything.  Now we can live."
And we all want to walk out into it.
Walk out into it, at night, and look up,
Thinking that this world is a simple world
While all around us it never ceases.
We can walk for miles down an empty road
And see it swirl down beneath each streetlight.
We can turn and watch our path disappear.
And it continues to quietly come.
It has come, at last, and changed everything. 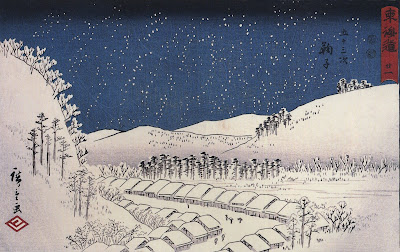