I return often to the poetry of Walter de la Mare.  As is the case with all the poets of whom I am fond, I go there in search of Beauty and Truth.  But, when it comes to de la Mare, I also go because of his common sense, equanimity, wisdom, and goodwill.  His essential humanity is a wonderful thing to experience, and to learn from.  How I feel about him is captured quite well by one of his poems:
Rarities
Beauty, and grace, and wit are rare;
And even intelligence:
But lovelier than hawthorn seen in May,
Or mistletoe berries on Innocent's Day
The face that, open as heaven, doth wear --
With kindness for its sunshine there --
Good nature and good sense.
Walter de la Mare, Inward Companion: Poems (Faber and Faber 1950).
Revisiting his poetry over the past few weeks, I noticed these qualities more acutely.  I suspect this is due to the contrast between the humanity one finds in de la Mare and his poems and the unedifying spectacle we have been witnessing the past few months, which is the antithesis of all that is embodied in his life and art.
Looking for old favorites, I came upon this:
Ah, Stranger, breathe a sigh:
For, where I lie,
Is but a handful of bright Beauty cast:
It was; and now is past.
Walter de la Mare, The Complete Poems of Walter de la Mare (Faber and Faber 1969). 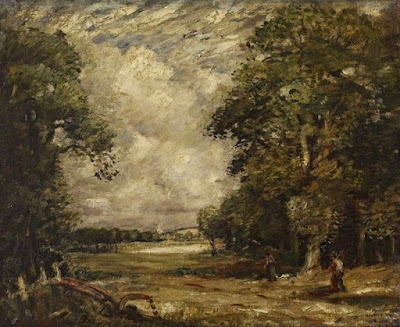 David Muirhead (1867-1930), "English Landscape"
"A handful of bright Beauty."  How lovely.  When it comes to poetry, one thing leads to another, doesn't it?  Something floated to mind.  So I took one of Norman Ault's fine anthologies down from the shelf and turned the pages to this:
An Epitaph for a Godly Man's Tomb
Here lies a piece of Christ; a star in dust;
A vein of gold; a china dish that must
Be used in heaven, when God shall feast the just.
Robert Wild (1609-1679), in Norman Ault (editor), Seventeenth Century Lyrics from the Original Texts (Longmans, Green & Co. 1928).  The poem was first published in 1668.
I am no doubt getting old and cranky, but the 17th century seems like a seemly and hospitable place to me these days.  Does one reach a point in life where one feels that one has had enough, that it is now time to depart?  "But no longer at ease here, in the old dispensation,/With an alien people clutching their gods."  A different century, a different set of gods, yes.  And yet . . . 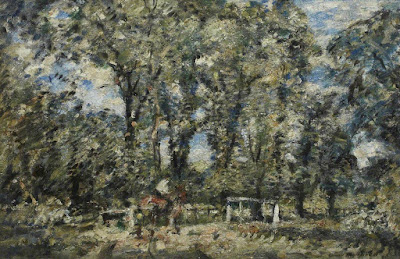 David Muirhead, "Woodland Scene" (1918)
"A star in dust."  Another lovely thought.  Another stepping stone.  I went to another shelf and sought out this:
What is Death?  A Life
disintegrating into
smaller simpler ones.
W. H. Auden, from the sequence "Shorts II," in Collected Poems (Faber and Faber 1976).
"A handful of bright Beauty."  "A star in dust."  "A Life/disintegrating into/smaller simpler ones."  Three thoughts randomly and unexpectedly coming together.  I do not place them here in an attempt at edification.  (The last thing I am in need of at the present time is unasked-for edification, thank you.  Thus, have no fear, dear readers, I am not a member of the edification police.)  As I have said here before, I am easy to please.  This is nothing more than a report on how I spent an evening.  Frolic and detour. 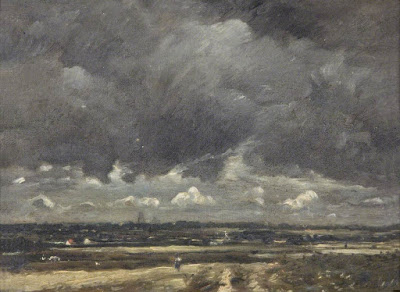 David Muirhead, "A Lowland Landscape"
I did not begin my evening expecting to have these three poems reappear.  But this is the way poetry works.  A poem that touches us never vanishes.  Who knows when it will return?
One day an unbidden gift unaccountably arrives at our doorstep. Where did this come from?  One thing leads to another.
Onto the rain porch
from somewhere outside it comes --
a fallen petal.
Takahama Kyoshi (1874-1959) (translated by Steven Carter), in Steven Carter, Traditional Japanese Poetry: An Anthology (Stanford University Press 1991), p. 443. 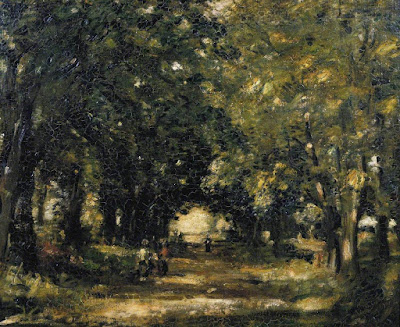 Over the course of the marvelous year we have been enjoying, various thoughts by Marcus Aurelius have been returning to me.  As ever, the good Emperor has been there before we have, and knows a thing or two.  For instance: "How ridiculous, and like a stranger is he, who is surprised at any thing which happens in life!"  (Marcus Aurelius, Meditations, Book XII, Section 13, in Francis Hutcheson and James Moor (translators), The Meditations of the Emperor Marcus Aurelius Antoninus (1742), p. 285.)  Jeremy Collier, in his always piquant early-18th century style, renders the passage thus: "How unacquainted is that Man with the World, and how ridiculous does he appear, that makes a wonder of any thing he meets with here?" (Jeremy Collier (translator), The Emperor Marcus Antoninus: His Conversation with Himself (1701), page 229.)
He's right, of course.  Natural calamity and human miscreance and malfeasance are par for the course.  And I'm sure that even in the Emperor's time reports of disaster and human folly were spread far and wide in bad faith, ignorance, and self-interest by the supercilious newsmongers of the day (even in the absence of such hallmarks of Human Progress and Enlightenment as Twitter).
In the meantime, bad news or not, the creators and preservers of that which is important proceed quietly about their business.
The Just
A man who cultivates his garden, as Voltaire wished.
He who is grateful for the existence of music.
He who takes pleasure in tracing an etymology.
Two workmen playing, in a café in the South, a silent game of chess.
The potter, contemplating a color and a form.
The typographer who sets this page well, though it may not please
him.
A woman and a man, who read the last tercets of a certain canto.
He who strokes a sleeping animal.
He who justifies, or wishes to, a wrong done him.
He who is grateful for the existence of Stevenson.
He who prefers others to be right.
These people, unaware, are saving the world.
Jorge Luis Borges (translated by Alastair Reid), in Jorge Luis Borges, Selected Poems (edited by Alexander Coleman) (Viking 1999), page 449. 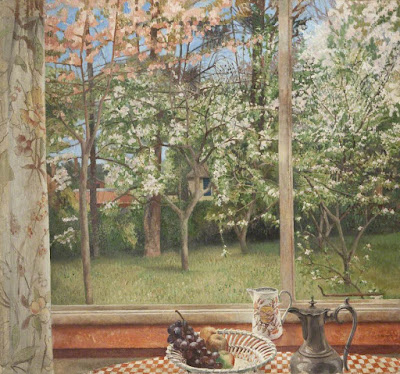 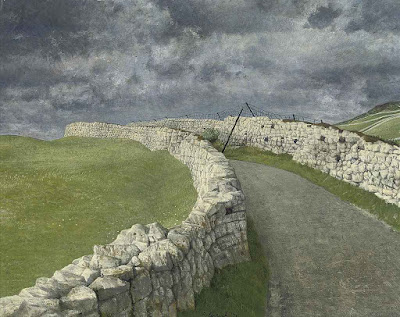