Ah, the dreams of felicity that we carry around inside us!  Who knows where they come from?  Who knows how we go about contriving them? And where do we find the materials for these dreams?

Consider, for instance, the dream of the cottage.  A nest.  The small, clear space of tranquility, serenity, and contentment that we long for.  At long last, peace and quiet.

Were I a king, I could command content.
Were I obscure, unknown should be my cares.
And were I dead, no thoughts should me torment,
Nor words, nor wrongs, nor loves, nor hopes, nor fears.
A doubtful choice, of three things one to crave,
A kingdom, or a cottage, or a grave.

"A kingdom, or a cottage, or a grave."  Is this indeed "a doubtful choice"?  I think not.  Obscurity is a good thing.  "Happy were he could finish forth his fate/In some unhaunted desert, most obscure/From all societies, from love and hate/Of worldly folk; then might he sleep secure . . ."  What could be better than living an obscure life in an obscure cottage?

W. B. Yeats, The Countess Kathleen and Various Legends and Lyrics (Unwin 1892).

As I have noted here before, I am unapologetically enamored of the cape-wearing Yeats of the 1890s, the Celtic Twilight Yeats.  This is no doubt the result of coming across his early poems in my impressionable youth.  But I see no reason to change my feelings.  "The Lake Isle of Innisfree" will always remain dear to me.

Of course, even before he replaced his capes with fur coats and began delivering imperious, patronizing speeches in the Irish Senate about the small-mindedness of "the middle-class," the thought of Yeats hand-building a cabin and cultivating nine rows of beans was a risible one.  Still, he was entitled to dream.  As are we all.  To wish to abide where "peace comes dropping slow" is not, and never will be, an idle dream. 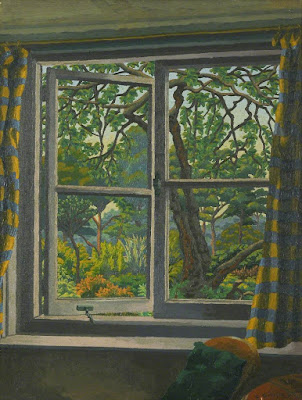 Is the cottage dream nothing more than a "fond dream," "a lie, . . . a kindly meant lie"?  Modern ironists would think so, and would add what they consider to be the killing epithet:  "a sentimental dream."  However, the poets think otherwise, from the epigrammatists of The Greek Anthology to T'ao Ch'ien and Wang Wei, from the Japanese haiku poets to William Wordsworth and John Clare, from Horace to Norman MacCaig and George Mackay Brown.  I attend to the poets.

The little cottage stood alone, the pride
Of solitude surrounded every side.
Bean fields in blossom almost reached the wall;
A garden with its hawthorn hedge was all
The space between.  --  Green light did pass
Through one small window, where a looking-glass
Placed in the parlour, richly there revealed
A spacious landscape and a blooming field.
The pasture cows that herded on the moor
Printed their footsteps to the very door,
Where little summer flowers with seasons blow
And scarcely gave the eldern leave to grow.
The cuckoo that one listens far away
Sung in the orchard trees for half the day;
And where the robin lives, the village guest,
In the old weedy hedge the leafy nest
Of the coy nightingale was yearly found,
Safe from all eyes as in the loneliest ground;
And little chats that in bean stalks will lie
A nest with cobwebs there will build, and fly
Upon the kidney bean that twines and towers
Up little poles in wreaths of scarlet flowers.

There a lone couple lived, secluded there
From all the world considers joy or care,
Lived to themselves, a long lone journey trod,
And through their Bible talked aloud to God;
While one small close and cow their wants maintained,
But little needing, and but little gained.
Their neighbour's name was peace, with her they went,
With tottering age, and dignified content,
Through a rich length of years and quiet days,
And filled the neighbouring village with their praise.

I am no doubt simple-minded or easily impressed (or both), but my love for the poem turns upon eight words:  "Green light did pass/Through one small window."  No explanation or explication or commentary is necessary.

(An aside:  Clare's ten-line apostrophe on birds is wonderful.  How typical of him.  Does any poet exceed him in the love of birds?  A further aside:  the passage brings to mind the final line of "Happy were he could finish forth his fate":  "Where harmless robin dwells with gentle thrush.") 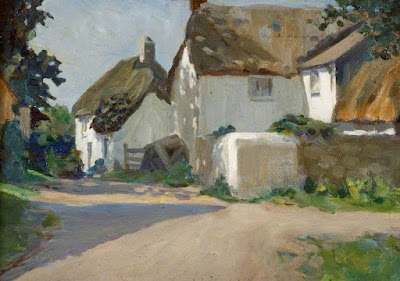 On a recent evening, I stood at the kitchen sink, looking out the window at the branches of a camellia tree that stands beside the house.  If I open the window, I can reach out and touch the leaves.  The camellia and I have kept each other company for 22 years.  In each of those years, I have seen its red flowers bloom, turn rusty brown, and fall away.  How could I have paid so little attention to it through all of those vanished seasons?  "The blossoms did not betray me.  I betrayed the blossoms."

Dear readers, we each have it within us to live the cottage life.  It is not a mere dream.  I have said this in the past, and I will say it again:  at this moment, we live in Paradise.

Boughs with apples laden around me whisper;
Cool the waters trickle among the branches;
And I listen dreamily, till a languor
Stealeth upon me.

Sappho (translated by Percy Osborn), in Percy Osborn, The Poems of Sappho (Elkin Matthews 1909).  As is the case with nearly all of Sappho's recovered poetry, this is a fragment of a lost poem.  Osborn added the title.

Another translation of the same fragment:

. . . about the cool water
the wind sounds through sprays
of apple, and from the quivering leaves
slumber pours down. . . . 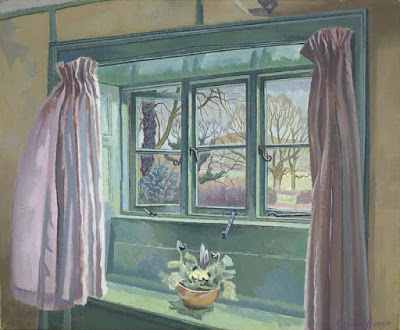 Looking back into your past, you may see someone who resembles you, but who no longer exists.  Yet, despite doubts and misgivings ("Who is that person?"), there is no getting around it:  that vaguely familiar stranger is indeed you.

I recall a windy, bright blue and gold autumn morning on the Isle of Skye. Another life ago.  I followed as someone dear to me walked ahead across a wide green field toward a grey stone crumbling castle on the edge of a cliff. Beyond the castle lay the deep-blue of the Little Minch, white-capped.  Am I imagining it, or did she turn and smile?

When the cloud shut down on the morning shine,
And darkened the sun,
I said, "So ended that joy of mine
Years back begun."

But day continued its lustrous roll
In upper air;
And did my late irradiate soul
Live on somewhere? 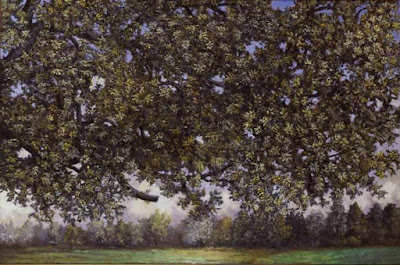 Of course Hardy would think this way!  It is he who wrote:  "I believe it would be said by people who knew me well that I have a faculty (possibly not uncommon) for burying an emotion in my heart or brain for forty years, and exhuming it at the end of that time as fresh as when interred."  Thomas Hardy, The Life and Work of Thomas Hardy (edited by Michael Millgate) (Macmillan 1985), page 408.  (How like Hardy -- so conversant with, and so fond of, graveyards and tombs and revenants -- to use the words "burying," "exhuming," and "interred" in this context.)

We may not now recognize those strangers of our past lives, but how lovely, and how comforting, to think that their irradiate souls live on somewhere.

Still there, somewhere:
the moon off behind the mist
traversing the night. 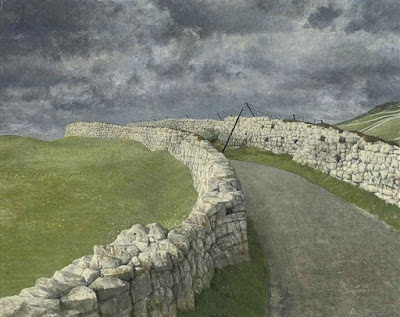