Day after day, modern "civilization" casts its flotsam and jetsam upon our shores.  There is no help for it.  Each of us maintains our own inventory of which pieces of detritus have caught our attention of late, or over the course of a lifetime.  The arrivals will never cease: "everything that can be imagined is bound to be realized at least once -- everything that mankind is capable of conceiving, it seems compelled to do."  (Saul Bellow, "Writers, Intellectuals, Politics: Mainly Reminiscence," in Saul Bellow, There Is Simply Too Much to Think About: Collected Nonfiction (edited by Benjamin Taylor) (Viking 2015), page 407.)
Bellow's assertion cuts both ways, doesn't it?  Human nature harbors a boundless capacity for both good and evil.  Who knows which of the two will appear next, and in what form?  Caught up in the daily distraction (the latest political and media "crisis"), we are encouraged to bounce back and forth between hope and dread, anxiously awaiting "news."  This is no way to live.
Nearly every day I walk past a small round meadow, about fifty feet wide, which is surrounded on all sides by tall pines.  A single young maple stands near the center of the circle of grass and wildflowers. Each year I watch the maple change through the seasons, out there alone in the open.  Who knows what will happen to it?  It will likely outlive me, which is a comfort.  We each go on in our own way.
Alternative worlds are available to us.  Worlds free of flotsam and jetsam.  I have recently been spending time with poems set to music in England in the late 16th and early 17th centuries.  Another world (not without its own good and evil, of course), but one which feels seemlier and nobler than the one in which we now find ourselves.  In the songs, one comes upon lines such as these:
Constant Penelope sends to thee, careless Ulysses.
Write not again, but come, sweet mate, thyself to revive me.
Troy we do much envy, we desolate lost ladies of Greece,
Not Priamus, nor yet all Troy can us recompense make.
Oh, that he had, when he first took shipping to Lacedaemon,
That adulter I mean, had been o'erwhelmed with waters.
Then had I not lain now all alone, thus quivering for cold,
Nor used this complaint, nor have thought the day to be so long.
Anonymous, in William Byrd, Psalms, Sonnets, and Songs of Sadness and Piety (1588), in E. H. Fellowes (editor), English Madrigal Verse 1588-1632 (Oxford University Press 1967), page 48. The eight lines are a translation of the opening lines of the First Epistle of Ovid's Heroides.  Ibid, page 683.
What shall it be: Bedlam, or a world in which a poet forever unknown to us wrote of "constant Penelope"? 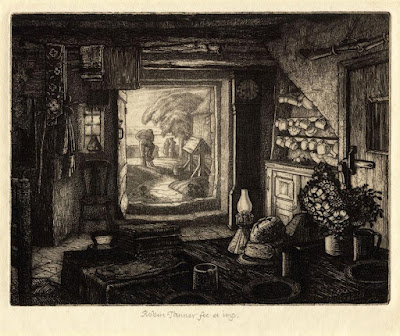 Robin Tanner (1904-1988), "The Gamekeeper's Cottage" (1928)
The Elizabethan era may indeed be a different world, but I was pleased to encounter these lines, which are timeless, in one of the songbooks:
The love of change hath changed the world throughout;
And what is counted good but that is strange?
New things wax old, old new, all turns about,
And all things change except the love of change.
Yet find I not that love of change in me,
But as I am so will I always be.
Anonymous, in Richard Carlton, Madrigals to Fine Voices (1601), Ibid, page 77.  As is the case with many of the songs from the period, the identity of the poet is not known.
As one who is conservative in temperament (a temperament confirmed by six decades of watching the world), it is gratifying to discover a kindred soul from four centuries ago.  The lamenters of change are always with us, aren't they?  Mind you, the conservatism of which I speak has nothing whatsoever to do with contemporary politics, which are of no interest to me.
"Yet find I not that love of change in me" (a lovely line) in turn brings this to mind:
The Metropolitan Underground Railway
Here were a goodly place wherein to die; --
Grown latterly to sudden change averse,
All violent contrasts fain avoid would I
On passing from this world into a worse.
William Watson (1858-1935), Epigrams of Art, Life, and Nature (Gilbert Walmsley 1884).
I concede that the Underground is no doubt a marvelous thing. Having once lived in Tokyo, I recognize the convenience and efficiency of subways and train lines.  But I sympathize with the sentiments expressed in the poem.  "Grown latterly to sudden change averse."  Yes.  A time comes when one feels prepared to quietly and permanently exit the wearisome world of change. 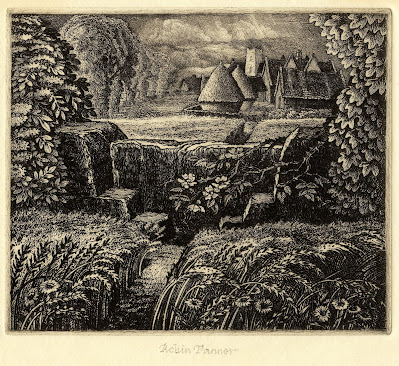 Robin Tanner, "June" (1946)
But I feel I've lost the thread.  The flotsam and jetsam of the modern world and aversion to change are ultimately of no moment.  As always, one should attend to one's soul.  Where does one start?  Best to return to the solitary maple tree in the clearing among the pines. Everything begins and ends with a single beautiful particular.
A quiet bell sounds --
and reveals a village
waiting for the moon.
Sōgi (1421-1502) (translated by Steven Carter), in Steven Carter, The Road to Komatsubara: A Classical Reading of the Renga Hyakuin (Council on East Asian Studies, Harvard University 1987), page 96. 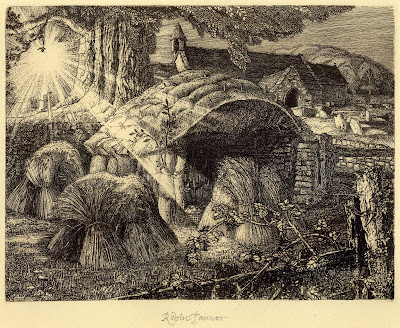 Is the World we live in enchanted or disenchanted?  Happily, we cannot think, or reason, our way to an answer to this question. Moreover, the answer may be beyond words, which is appropriate. The World is mostly reticent.  But, if we pay attention to it, we may receive glimpses, glimmers, inklings.
And, in the end, the answer we may stumble upon applies only to a single soul: our own.  Still, we may encounter kindred souls in our travels.  What would we do without them?
"What a marvelous time it was when everything was alive, according to human imagination, and humanly alive, in other words inhabited or formed by beings like ourselves; when it was taken as certain that in the deserted woods lived the beautiful Hamadryads and fauns and woodland deities and Pan, etc., and, on entering and seeing everything as solitude, you still believed that everything was inhabited and that Naiads lived in the springs, etc., and embracing a tree you felt it almost palpitating between your hands and believed it was a man or a woman like Cyparissus, etc., and the same with flowers, etc., just as children do."
Giacomo Leopardi, Zibaldone (translated by Kathleen Baldwin, Richard Dixon, David Gibbons, Ann Goldstein, Gerard Slowey, Martin Thom, and Pamela Williams) (Farrar, Straus and Giroux 2013), page 69.
As an unrepentant Wordsworthian pantheist (the Wordsworth of 1797 through 1807) and a lover of the poems in The Greek Anthology, I fully concur with Leopardi's thoughts.  How far we have fallen!  But some may say: "What of Progress?"  Ah, yes, "Progress."  We now find ourselves in the hands of political, scientific, technological, and media "experts."  That seems to be working quite well. 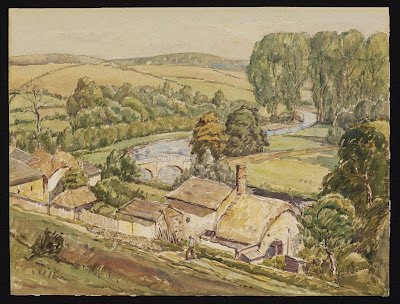 H. S. Merritt, "Woodford Bridge in the Avon Valley" (c. 1942)
I am also wholly in sympathy with Walter de la Mare:
Exile
Had the gods loved me I had lain
Where darnel is, and thorn,
And the wild night-bird's nightlong strain
Trembles in boughs forlorn.
Nay, but they loved me not; and I
Must needs a stranger be,
Whose every exiled day gone by
Aches with their memory.
Walter de la Mare, The Listeners and Other Poems (Constable 1912).
The pang of exile from a lost, ever unreachable world is a thread that runs throughout de la Mare's poetry.  But it never leads to a slighting of the World as we find it.  Nor does it lead to despair, or to lack of love for the beautiful particulars of the World.  Thus: "Now is the all-sufficing all/Wherein to love the lovely well,/Whate'er befall." ("Now.")  Or this: "Look thy last on all things lovely,/Every hour." ("Fare Well.")
And, despite the sadness and the sense of irremediable loss expressed in "Exile," de la Mare still catches glimpses of the lost world in the English countryside:
Echo
Seven sweet notes
In the moonlight pale
Warbled a leaf-hidden
Nightingale:
And Echo in hiding
By an old green wall
Under the willows
Sighed back them all.
Walter de la Mare, Bells and Grass: A Book of Rhymes (Faber and Faber 1941).
This brings to mind a lovely poem from The Greek Anthology:
High up the mountain-meadow, Echo with never a tongue
Sings back to each bird in answer the song each bird hath sung.
Satyrus (c. 1st century B.C. - 1st century A.D.) (translated by F. L. Lucas), in F. L. Lucas (editor), Greek Poetry for Everyman (J. M. Dent 1951), page 358.
There is no telling what one might suddenly see out in a field:
Flood Water
What saw I -- crouching by that pool of water
Bright-blue in the flooded grass,
Of ash-white sea-birds the remote resort, and
April's looking-glass? --
Was it mere image of a dream-dazed eye --
That startled Naiad -- as the train swept by?
Walter de la Mare, Inward Companion: Poems (Faber and Faber 1950). 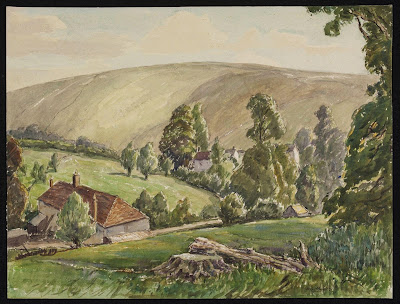 H. S. Merritt, "Bowerchalke" (c. 1942)
The ironic moderns among us have "progressed" too far to take any of this seriously.  They fancy themselves to be unillusioned and undeceived.  Products of the so-called "Age of Enlightenment."
Leopardi again: "[T]here has never been an age so tainted and corrupted that it did not believe itself to stand at the pinnacle of civilization and social perfection, and to be an example to the other ages, and, in particular, superior in every respect to all past ages, and at the farthest point in space yet traveled by the human spirit." (Giacomo Leopardi, Zibaldone, page 395.)
Enchanted or disenchanted?  Each of us makes a choice in this matter every day.
Ionic
That we've broken their statues,
that we've driven them out of their temples,
doesn't mean at all that the gods are dead.
O land of Ionia, they're still in love with you,
their souls still keep your memory.
When an August dawn wakes over you,
your atmosphere is potent with their life,
and sometimes a young ethereal figure,
indistinct, in rapid flight,
wings across your hills.
C. P. Cavafy, Collected Poems (translated by Edmund Keeley and Philip Sherrard) (Princeton University Press 1975). 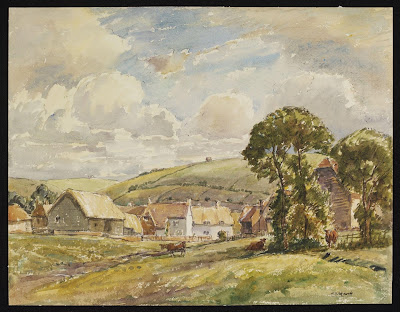