Kingsley Amis: "Instead Of An Epilogue"

Kingsley Amis concluded his Memoirs with a poem.  I beg your indulgence for posting the poem in its entirety, but I do so for three reasons:  (1) it is, I think, a beautiful poem; (2) given its placement at the end of the Memoirs, it has, I fear, been overlooked; and (3) it reveals a side of Amis that has, unfortunately, been lost in the stereotypical view of him as a curmudgeon.  Amis dedicated the poem "To H."  "H" is Hilary Bardwell, his first wife.  They were divorced in 1965.  Late in his life, Amis lived with her and her husband.  She died this past June 24.

Instead of an Epilogue

In 1932 when I was ten
In my grandmother's garden in Camberwell
I saw a Camberwell Beauty butterfly
Sitting on a clump of Michaelmas daisies.
I recognised it because I'd seen a picture
Showing its brownish wings with creamy edges
In a boy's paper or on a cigarette-card
Earlier that week.  And I remember thinking,
What else would you expect?  Everyone knows
Camberwell Beauties come from Camberwell;
That's why they're called that.  Yes, I was ten.

In 1940 when I was eighteen
In Marlborough, going out one winter's morning
To walk to school, I saw that every twig,
Every leaf in the vicar's privet hedge
And every stalk and stem was covered in
A thin layer of ice as clear as glass
Because the rain had frozen as it landed.
The sun shone and the trees and shrubs shone back
Like pale flames with orange and green sparkles.
Freak weather conditions, people said,
And one was always hearing about them.

In '46 when I was twenty-four
I met someone harmless, someone defenceless,
But till then whole, unadapted within;
Awkward, gentle, healthy, straight-backed,
Who spoke to say something, laughed when amused;
If things went wrong, feared she might be at fault,
Whose eye I could have met for ever then,
Oh yes, and who was also beautiful.
Well, that was much as women were meant to be,
I thought, and set about looking further.
How can we tell, with nothing to compare? 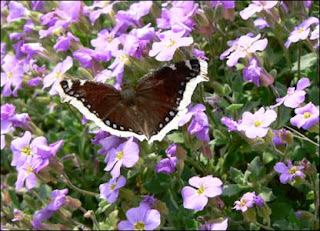 Camberwell Beauty
Posted by Stephen Pentz at 8:15 AM

A beautiful poem indeed - and new to me. Thanks.
And a Camberwell Beauty in a Camberwell garden - KA was blessed indeed!

Thanks for resurrecting this one; it beautifully exemplifies the title of your blog. Amis was a rum case. I agree, it's a wonderful poem, but it's a tender coda to one of the most mean-spirited memoirs I think I've ever read.

Nige: Thank you for visiting again. With the Camberwell Beauty in the poem, I was hoping that you would stop by -- I thought that you might enjoy it.

PAL: Thank you for once more visiting and commenting. I completely agree with you about the nasty nature of the Memoirs. (Only Larkin and a few others escaped the knife.) It made for difficult reading.

Perhaps that is why "Instead of an Epilogue" left me breathless when I first read it -- coming after all that had gone before.

I wonder if Larkin did escape Amis's malice. Ian Hamilton shrewdly dissects its sly refinements in his 'Walking Possession: Essays & Reviews 1968-1993'. I recommend the whole volume to aficionados of this blog.

Thank you for the excellent recommendation, PAL. I had forgotten about Hamilton's review of the Memoirs -- I will have to go back and take a look at it. I do recall Amis writing somewhere (I don't know if it was in the Memoirs or in one of his reviews) that he couldn't make head or tail out of the final stanza of 'High Windows.' And there were other digs from time-to-time. So Larkin was not let off entirely.

As I recall, 'Walking Possession' has a few pieces on Larkin as well. And I agree that it is well worth tracking down.

I hope you won’t mind my coming back on this one. We’re agreed on the quality of the poem; but doesn’t the final verse hold a note of somehow pleasurable wallowing in remorse that’s so characteristic of blokes when looking back on a relationship with a woman when it’s all safely over? I get the same feeling when reading Hardy’s poems about his first wife.

Or am I being an Amis-type grouch about this? The question’s rhetorical; no real need for a reply.

Re Hamilton; he did two very long LRB interviews with Dan Jacobson a few months before he died. Much on the Lowell and Salinger books. They're on-line and free. If you don't know them and you're interested, I'll find the links.

PAL: I understand what you are saying about Amis and Hardy. After all, they didn't exactly treat their first wives in an exemplary fashion. Thus, their subsequent remorse/regret may seem a bit -- I am struggling for the right word -- hypocritical? undeserved? late?

On the other hand, I must confess (sheepishly) that I am sucker for this type of 'terrible, searing regret' (to quote Richard Ford from 'The Sportswriter'). Perhaps this comes from reading Hardy's 'Poems of 1912-13' at an impressionable age. 'Well, well! All's past amend,/Unchangeable. It must go./I seem but a dead man held on end/To sink down soon. . .': Whew! Those poems don't have the impact that they once did, but still. . . And I must admit that 'Instead of an Epilogue' gets a high ranking in the 'terrible, searing regret' department. But I certainly understand your point. (Which, as you say, is a rhetorical one.)

And thank you for the reference to the Hamilton interviews -- I was not aware of them. I was able to find the full texts on The London Review of Books site. Thanks.