I first came across "In a Hotel Writing-Room" in Philip Larkin's infamous anthology The Oxford Book of Twentieth-Century English Verse.  I say "infamous" because, when the anthology was published in 1973, Larkin was nearly universally excoriated for producing what was regarded as a reactionary, old-fashioned collection which virtually ignored the existence of "modernism."  (In other words, the anthology is wonderful.)  I suspect that Larkin compiled it with some glee -- much as he delighted in playing the curmudgeonly, conservative misanthrope in his interviews.  (Which is not to say that he was not at times curmudgeonly, conservative, and misanthropic -- but I do believe that he was wont to be "naughty," as W. H. Auden once told him.)

But, to return to the poem at hand.  It is the only poem by John Cowper Powys (1872-1963) that Larkin included in the anthology.  (Powys is, after all, better known for his fiction than for his poetry.)  Because I enjoyed the poem, I sought out Powys's other poems in order to find out what I had been missing.  I discovered that "In a Hotel Writing-Room" is Powys's finest poem.  There are others that are interesting, but nothing approaches it in its creativity and use of language.  (I have done the same sort of exploration with respect to other lesser-known poets included in the anthology, and I have had the same experience:  Larkin's judgment is -- in the humble opinion of this common reader -- unerring.)

In any event, here is the poem:

We artists have strange nerves!
That man in front of me,
I had been hating him
Implacably,
Just for the lines and curves
Of his unconscious face,
Lines that brought no disgrace
Upon humanity.
But when that same man spoke,
And with a grunt and wheeze
Asked me how many cs
Had the word "Necessity,"
The cord of my hatred broke.
"For how's a beggar to tell"
He said; -- and I loved him for it --
"With a word as long as hell,
If no wise blighter tells us?"
-- "You are right, my friend.  We may score it
Over and over with c;
But at last it is not we
Who spell 'Necessity,'
But Necessity who spells us!"
He smiled.  I smiled.  And between
Your artist and your drummer
Swept, on a breeze of summer,
A wave of sympathy;
And we even came to wonder
Where -- in the name of thunder --
We had met before this scene. 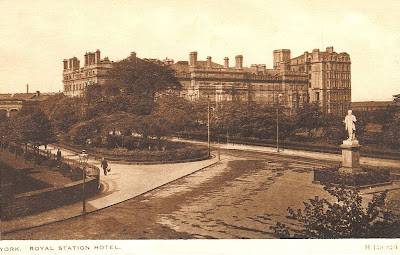 Royal Station Hotel, York
Posted by Stephen Pentz at 2:10 AM