The poetic conceit that we are all fated to vanish beneath the shifting sands of time is a hoary one.  Shelley's "Ozymandias" is perhaps the best-known example of the type:  ". . . boundless and bare/The lone and level sands stretch far away."  And so on.  However, when it comes to our sandy fate, I prefer the following poem by Eugene Lee-Hamilton (1845-1907), which is more about living than about death and oblivion.

A strange square house, all battered, used to stand
Upon the Gascon coast, where sparse pines keep
A doubtful footing, as the salt winds sweep
The restless hillocks of ill-bladed sand.

A house?  it was the bell-loft, Norman-plann'd,
Of long-lost Soulac's minster, buried deep
In sand, which Ocean never seized to heap
In its eternal battle with the land.

All else was gone:  fit image of the fate
That overtakes the rich and stately pile
Which, arch on arch, life's early dreams create.

The real slowly clogs it, nave and aisle,
Transept and apse; and we are glad, if late,
Some humble vestige shelters us awhile. 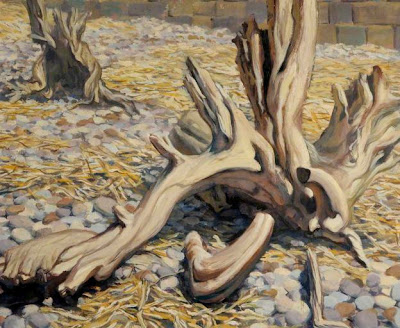 Living, even if temporarily, in the ruins of the past?

Doesn't that seem to carry the same thought as "Look on my works, ye Mighty, and despair!"

Fred: true, but "some humble vestige [that] shelters us awhile" adds a homey, somehow comforting, touch compared to the scattered stones of a Pharaoh -- but I'm probably grasping at straws! (Or holding sand in my hands.) As always, thanks for dropping by, Fred.

Yes, I guess "shelters us awhile" does add something not present in Ozymandias.

Fred: I guess I was just thinking that Lee-Hamilton isn't trying to make the grand statement that Shelley is out to make. Thanks again.