By happenstance I have lived beside salt water since the age of eleven:  the Pacific Ocean (to the west, with the exception of one year in Japan), Puget Sound (a meandering inland arm of the Pacific), and the Indian Ocean (for two years).  I've become accustomed to having an expanse of blue or grey at my shoulder.

Don't get me wrong:  I love the nearly waterless wide-openness of, say, the high desert of Utah and Arizona and New Mexico or the plains of the Midwest ("amber waves of grain" is quite accurate).  And one of the finest drives I have ever taken was along the green-walled and green-vaulted Natchez Trace Parkway from Natchez on the Mississippi River to the outskirts of Nashville.

But there is something about having water out on the horizon.  "The sea is a mirror, not only to the clouds, the sun, the moon, and the stars, but to all one's dreams, to all one's speculations. . . . The sea tells us that everything is changing and that nothing ever changes, that tides go out and return, that all existence is a rhythm."  Arthur Symons, "In a Northern Bay," Cities and Sea-Coasts and Islands, (1918), page 296. 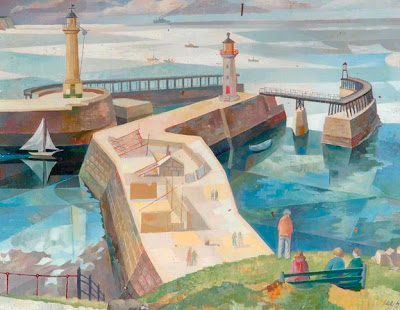 In tottering row, like shadows, silently
The old pier-timbers struggle from the sea;
Strained in old storms by those wild waves that creep
So gently now, no longer do they keep
The pier that on them rested long ago,
But stand as driven piles in tottering row.
The sky sails downward, upward creeps the wave,
For countless clouds toward the sun's bright grave
Move curiously with grey and misty wing;
So thickly all the sky environing,
That only by one pale bright spot is known
Where still the sunken light is upward thrown,
And lately sunk the weary king of day:
Still on the sands below in stealthy play
Arise the billows of the nightly tide;
Each with its own clear layer doth override
The spreaded calm where its last brother rolled;
Each upon other rippling draws the fold
Of its thin edge along the soaked sand,
And stirs the spongy foam 'twixt sea and land,
And lifts the dark waifs higher on the shore.
Yet in this quietness resides the roar
Of ocean floods; one rising of that wind,
And those slow clouds would leave the night behind
In bitter clearness; those cold waves would roll
In snarling billows white.  So of the soul. 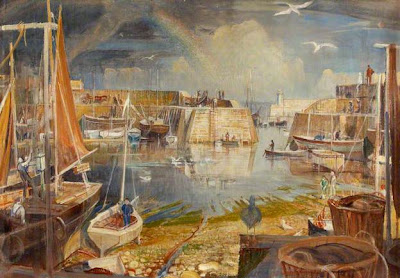 "The sea is austere, implacable, indifferent; it has nothing to tell us; it is an eternal question. . . . Yet, as ecstasy is only possible to one who is conscious of the possibility of despair, so the sea, as it detaches us from the world and our safeguards and our happy forgetfulnesses, and sets us by ourselves, as momentary as the turn of a wave, and mattering hardly more to the universe, gives us, if we will take them, moments of almost elemental joy."  Arthur Symons, Ibid, page 297.

Why does the sea moan evermore?
Shut out from heaven it makes its moan,
It frets against the boundary shore;
All earth's full rivers cannot fill
The sea, that drinking thirsteth still.

Christina Rossetti, Goblin Market, The Prince's Progress and Other Poems (1875). 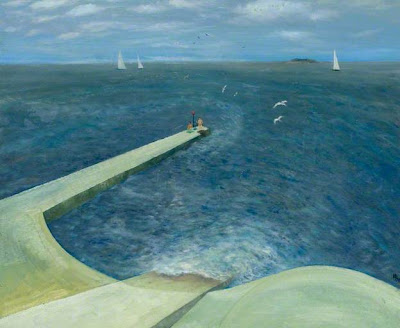