W. B. Yeats's "Ephemera," which I posted last week, goes quite well with the following poem by Thomas Hardy.  Although the poem was first published in 1899 (in Hardy's first collection of verse), it was written much earlier in Hardy's life.  He appended "1867" to it when it was published. Thus, the poem either was based upon an incident that occurred in 1867 or was written in that year, likely the latter.  Richard Purdy, Thomas Hardy: A Bibliographical Study (1954), page 98; Dennis Taylor, "The Chronology of Hardy's Poetry," Victorian Poetry, Volume 37, Number 1 (Spring 1999), pages 1-58.

In 1867, Hardy was 27 years old.  Yeats was 19 when he wrote "Ephemera." It is not surprising that the two young romantics might alight upon a similar theme and similar images.  But in their own idiosyncratic fashions, of course. 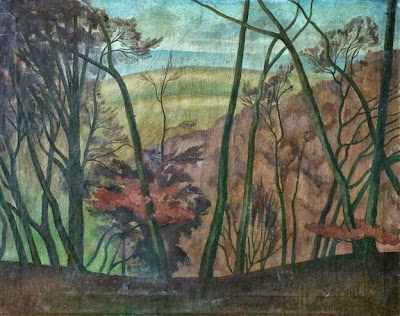 We stood by a pond that winter day,
And the sun was white, as though chidden of God,
And a few leaves lay on the starving sod;
-- They had fallen from an ash, and were gray.

Your eyes on me were as eyes that rove
Over tedious riddles of years ago;
And some words played between us to and fro
On which lost the more by our love.

The smile on your mouth was the deadest thing
Alive enough to have strength to die;
And a grin of bitterness swept thereby
Like an ominous bird a-wing. . . .

Since then, keen lessons that love deceives,
And wrings with wrong, have shaped to me
Your face, and the God-curst sun, and a tree,
And a pond edged with grayish leaves.

"Neutral Tones," like "Ephemera," is a poem that I discovered in my twenties.  I recall being particularly taken with:  "The smile on your mouth was the deadest thing/Alive enough to have strength to die."  The entire poem is evocative of that time of life, isn't it? 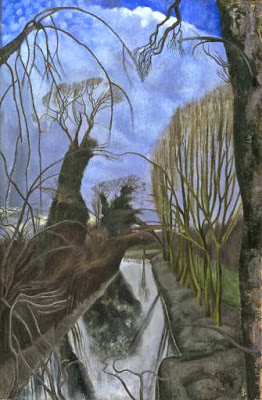 The following poem provides a nice complement to both "Neutral Tones" and "Ephemera."  Serendipitously, next Monday will be "Monday the 28th of October."

She stood beside me, I did not see her
Her shadow fell on Eastville Park
Not precise or shapely but spreading outwards
On the tatty grass of Eastville Park.

I did not then sit on a bench
I was a shadow under a tree
I was a leaf the wind carried
Around the edge of the football game.

No need for any return for I find
Myself where I left myself -- in the lurch
There are no trams but I remember them
Wherever I went I came here first.

C. H. Sisson, Anchises (Carcanet 1976).  Eastville Park is in Bristol, where Sisson was born and raised.

Sisson's use of "impend" in "the elms impend" (line 11) is lovely:  he combines the word's usual emotional sense (e.g., "impending doom") with its less commonly used physical sense: "to hang over" or "to overhang." 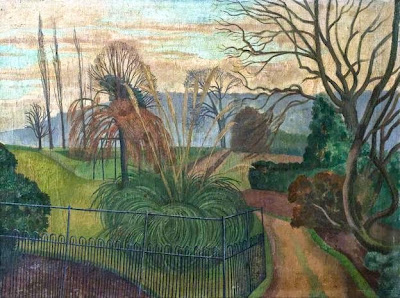 Ah, my old friend Thomas Hardy. He wasn't much good at love was he? He always chose the wrong woman. I feel here, especially if the date it was written WAS 1867, the woman of the poem may well have been his cousin Tryphene Sparkes, with whom he briefly had a . . . dalliance. But his friend Horace Moule was Tryphena's choice . . . I do wonder if this ill-fated love affair guided the equally ill-fated plots for his melodramatic novels.

You have chosen the poem of another poet unknown to me (there are many!) - Sisson - and again I thank you. Also for the explanation of "impend" used in that sense.

Both have emotional links with the wonderfully atmospheric Yeats poem "Ephemera," you included last week. Of the three, I think that is my favourite.

Bovey Belle: it's very nice to hear from you again. Thank you for visiting.

Yes, Hardy did have a tendency to complicate things when it came to love and relationships, didn't he? But don't we all?

I'm pleased to have introduced you to C. H. Sisson. I thought that the poem, as you suggest, fit well with "Neutral Tones" and "Ephemera," while having a more contemporary feel.

As always, I appreciate hearing your thoughts. Thanks again.