From an early age, I have thought of the oak as the exemplar of trees.  I'm not sure why.  I suspect it has something to do with childhood impressions of the shape of its leaf, smoldering piles of its fallen, raked-up leaves on autumn afternoons, and -- those wondrous things -- acorns.

But it may simply be a product of their size and substance: the oaks of my youth in Minnesota were majestic in height and breadth.  They were proverbial pillars of strength throughout the year.  And their lovely leaves and magical acorns added to their allure.  All accomplished without speaking a word. 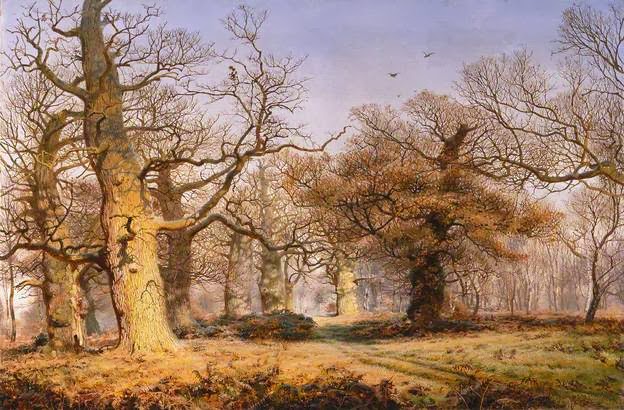 Spare the parent of acorns, good wood-cutter, spare!
Let the time-honour'd Fir feel the weight of your stroke,
The many-stalk'd thorn, or Acanthus worn bare,
Pine, Arbutus, Ilex -- but touch not the Oak!
Far hence be your axe, for our grandams have sung
How the Oaks are the mothers from whom we all sprung.

Here is a prose rendering of the epigram:

"Oh labourer!  Fear to cut down the mother of acorns; spare her!  Let the aged pine be destroyed, or the fir, or yonder paliurus, or the ilex, or the dry arbutus.  But let your axe be far from the oak-tree.  For our forefathers have told us that our first mothers were oaks." 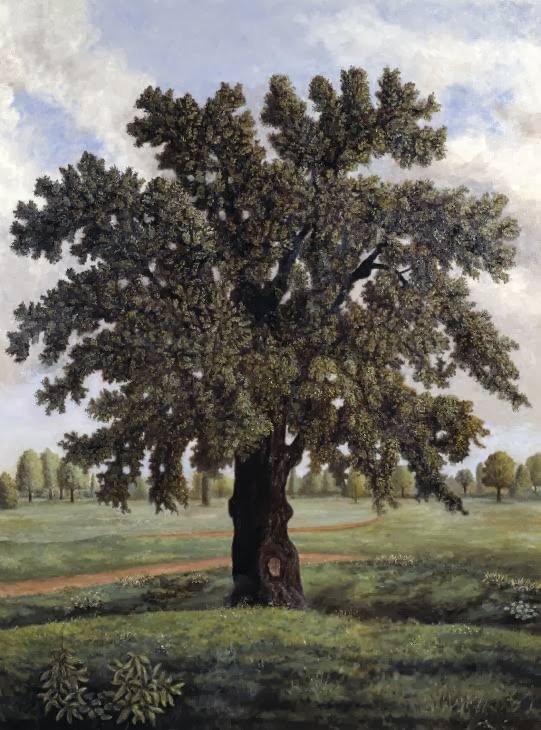 In the following poem, A. H. Bullen provides us with a chronological catalogue of the oak's legendary attributes -- together with reminders of humanity's less-than-noble relationship with the noble tree.

"Dodona's oaks were through the world renown'd."
Their riddling answers oft did men confound.

"Our Dryads were to mortals ever good."
Your Druid altars smoked with human blood.

"We saved your second Charles from dread mishap."
King David's son you caught in deadly trap.

"Rare banquets on oak-board were richly spread."
Oak-coffins were the revellers' last bed.

"Who carried Drake through strange uncharted seas?"
Be all your faults forgot, heroic trees! 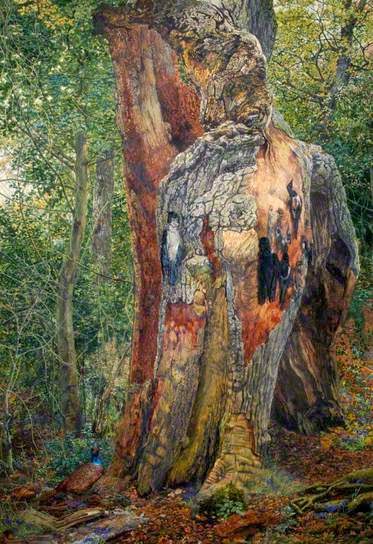 On a more encouraging note, we have this from Tennyson:

All his leaves
Fallen at length,
Look, he stands,
Trunk and bough,
Naked strength.

"Bright in spring,/Living gold" brings to mind "Nature's first green is gold,/Her hardest hue to hold."  The two poems are variations on the same theme, aren't they?

I like the fact that, unlike a great deal of Tennyson's poetry, "The Oak" is not prolix, ponderous, or sonorous.  The poem's brevity and simplicity may reflect the fact that he wrote it in his eightieth year.  It is worth noting that Tennyson said of the poem that it could be described as "clean cut like a Greek epigram."  Hallam Tennyson, Alfred, Lord Tennyson: A Memoir, Volume II (1897), page 366.  I think that lines 6 through 8 are particularly nice:  a line consisting of "Then; and then" is quite striking in a poem of that period. 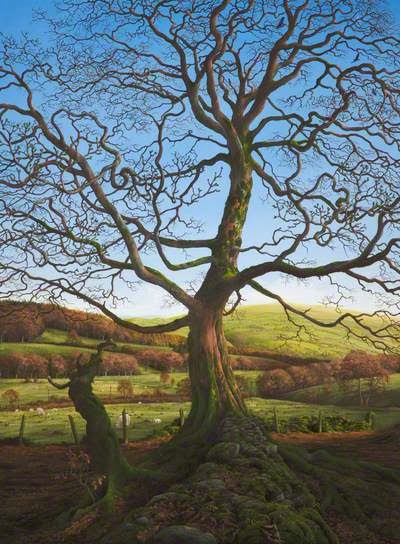 I think Frost's poem has more of a sense of regret than Tennyson's poem.

I share your love of oak trees. What beautiful artwork you have chosen too.

It's always good to hear from you. Thanks for visiting again.

acornmoon: yes, of course, that makes sense! Starting with the wonderful oak leaf and acorn and moon on the title page of your blog, for example. Lovely.

I'm pleased that you like the paintings -- different approaches, but all of them very nice, I think.

It's a pleasure to hear from you again. Thank you very much for stopping by.

First gnarled and brittle Corsican and then later Californian cork oaks have replaced as daily companions those robust English giants that sustained my rural childhood. It’s not just their relative size (I was perhaps also more easily over-towered at six than at sixty) but the dryness of their bark as I walk amongst them that makes their oxygen outbreath taste so different from that of their North European cousins.

So perhaps it’s an echo of imagined damp that gives my blood to tingle and reminds me of younger days when I read within Walt Whitman’s cluster of ‘Calamus Leaves’:

"I SAW in Louisiana a live-oak growing,
All alone stood it, and the moss hung down from the
branches;
Without any companion it grew there, uttering joyous
leaves of dark green,
And its look, rude, unbending, lusty, made me think
of myself;
But I wonder'd how it could utter joyous leaves,
standing alone there, without its friend, its
lover near—for I knew I could not;
And I broke off a twig with a certain number of
leaves upon it, and twined around it a little
moss,
And brought it away—and I have placed it in sight in
my room;
It is not needed to remind me as of my own dear
friends,
(For I believe lately I think of little else than of
them;)
Yet it remains to me a curious token—it makes me
think of manly love;
—For all that, and though the live-oak glistens there
in Louisiana, solitary, in a wide flat space,
Uttering joyous leaves all its life, without a friend, a
lover, near,
I know very well I could not."

I especially enjoy reading this poem in its form as reproduced alongside the manuscript which reveals some of its many re-workings, in the Walt Whitman Archive .
http://www.whitmanarchive.org/manuscripts/liveoak.html
It came to me as I read Whitman again this morning that, in his lifelong process of revision, he was both forever organically ‘weathering’ his poetry like the elements and also ‘growing’ them too. As you may know, the original name of these poems was ‘Live Oak, with Moss’ (the name touches me in its ‘still life’ simplicity). It changed into ‘Calamus Leaves’ and found a progressively larger home among ‘Leaves of Grass’. Over nearly forty years Whitman grew a slim volume of 12 poems into a collection of more than 400 poems. One example of ‘mighty oaks from little acorns grow’?

My post was seeded and grew out of reading your lovely blog this morning. Thank you again.
Midi

Oaks are my trees. I grew up at the feet of my grandmother sitting under the oak trees while she told me stories about the oak spirits. I even married a man who's last name means green oak. Thank you for a beautiful post.

Midi: thank you very much for the wonderful tie-in to Whitman -- all of which is new to me, my knowledge of Whitman being embarrassingly limited. I found the manuscripts that you linked to, and I agree that they are fascinating. And, of course, I most appreciate your sharing the poem, which fits perfectly.

I should have mentioned California oaks as well: my mother lives in the Central Coast area of California, and I have fond memories of walking in the hills among the oaks. As you say, they are of an entirely different character than the large Midwestern and English oaks: I mean in an emotional, not a scientific, sense.

Thank you again. And thank you as well for your kind words about the blog.

Emerald Window: you are very welcome. It is my pleasure. And thank you for your thoughts about the role of oaks in your life. When it comes to oaks, I think that only good things can flow from them. (Despite what Bullen's poem may say!)

Thank you for visiting. I hope you'll return soon.