Given the subject matter of this post, a disclaimer may be appropriate:  I am not, at the moment, brooding over mortality.  Actually, I am feeling quite cheerful.  "There will be dying, there will be dying,/but there is no need to go into that."

Yet, come to think of it, the two are not mutually exclusive, are they?  It is possible to be cheerful and, at the same time, to brood over (or at least be mindful of) mortality.  In fact, that may be an ideal state of being.  But I am not that wise.  Hence, this post is simply a matter of one thing leading to another.

If I lie unburied Sir,
These my Reliques, pray inter.
'Tis religion's part to see
Stones or turfs to cover me.
One word more I had to say;
But it skills not; go your way;
He that wants a burial room
For a Stone, has Heaven his Tomb.

"Passenger" means "passer-by" in this context.  Tom Cain and Ruth Connolly (editors), The Complete Poetry of Robert Herrick, Volume II (Oxford University Press 2013), page 724.  "It skills not" (line 6) means "it doesn't matter."  Ibid.  I presume that "wants" (line 7) means "lacks" in this context.  Herrick italicizes the final line, which, in accordance with his usual practice, signifies a quotation or a paraphrase from a classical source.  It has been suggested that the source is Lucan, Pharsalia, 7.819, as quoted (and translated) by Robert Burton in The Anatomy of Melancholy (Second Partition, Section 3, Member 5, Subsection 1):  "the Canopy of heaven covers him that hath no tomb."  Ibid. 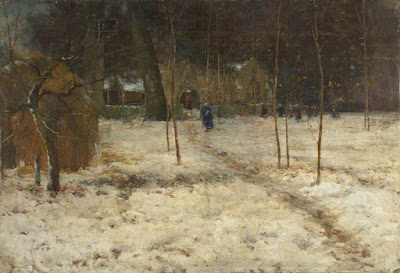 The thought of having Heaven (or the heavens) as one's tomb puts me in mind of the many touching epigrams about the deaths of unfortunate mariners that are contained in The Greek Anthology.  Most often, the mariner's comrades, or a stranger who happens upon the washed-up corpse while walking along the shore, are able to bury the mariner and erect a monument to his memory.  However, sometimes the seafarer remains for ever lost at sea.

No dust, no paltry marble for his grave
Has Erasippus, but the wide sea wave.
For with his ship he sank.  His bones decay --
But where, the cormorant alone can say.

Glaucus (translated by Goldwin Smith), in Henry Wellesley, Anthologia Polyglotta: A Selection of Versions in Various Languages, Chiefly from the Greek Anthology (1849), page 70.

Here is a prose translation of the epigram:

"Not dust nor the light weight of a stone, but all this sea that thou beholdest is the tomb of Erasippus; for he perished with his ship, and in some unknown place his bones moulder, and the seagulls alone know them to tell." 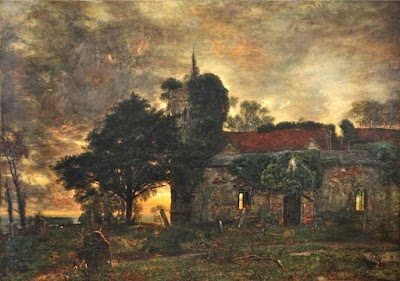 Wars on distant frontiers are a constant presence in classical Chinese poetry, and the prospect of a lonely death far from home and family is the theme of many poems.

Man -- pitiful insect,
out the gate with fears of death in his breast,
a corpse fallen in narrow valleys,
white bones that no one gathers up.

Anonymous (circa 6th to 7th century) (translated by Burton Watson), in Burton Watson, Chinese Lyricism: Shih Poetry from the Second to the Twelfth Century (Columbia University Press 1971), page 63.  The meaning of the phrase "Ch'i-yü-ko" is "uncertain."  Ibid, page 62.  The poem "was written to be sung."  Ibid.

Classical Greek and Chinese poetry share a surface matter-of-factness and simplicity that is underlaid by, and intertwined with, great emotion.  There is a dignity, seemliness, and reticence to this combination that makes the poetry extremely moving.  This may explain why the long-dead Greek and Chinese poets seem to be speaking directly to us, and for us.  We moderns are not so articulate, nor are we so wise.  We have forgotten a great deal. 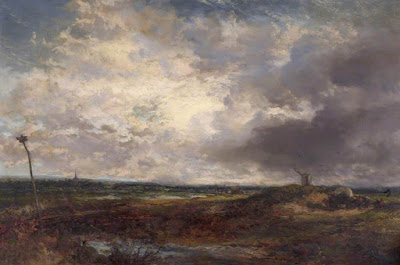 As I have remarked in the past, one of the wonderful things about reading poetry is how one poem can become a stepping stone to another.  The final line of the following poem has stayed with me for years.  I thought of it after I read Herrick's lines "He that wants a burial room/For a stone, has Heaven his Tomb."

Strong-shouldered mole,
That so much lived below the ground,
Dug, fought and loved, hunted and fed,
For you to raise a mound
Was as for us to make a hole;
What wonder now that being dead
Your body lies here stout and square
Buried within the blue vault of the air?

"Buried within the blue vault of the air."  Well, what can you say about that? Nothing need be said, but I will say something anyway:  this is why we read poetry.

In this context, I cannot help but think of one of my favorite poems.  It has appeared here on more than one occasion, but its final two lines are particularly apt.

When all is said and done, being untombed is not necessarily a fate to be dreaded.  The thought of being "buried within the blue vault of the air" does not trouble me.  If only cormorants or seagulls know where my bones lie, I have no objection.  A resting place "where harmless robin dwells with gentle thrush" sounds peaceful and lovely.  Like most everything, it is all a matter of perspective.  There are other considerations.

Some parts may perish; die thou canst not all:
The most of thee shall scape the funeral.

Robert Herrick, Poem 554, Hesperides (1648).  "Scape" appears in the original.  The final line may be an echo of Horace (Odes, Book III, Ode 30): "I shall not all die, and a large part of me will escape the Goddess of Death."  Tom Cain and Ruth Connolly (editors), The Complete Poetry of Robert Herrick, Volume II, page 675. 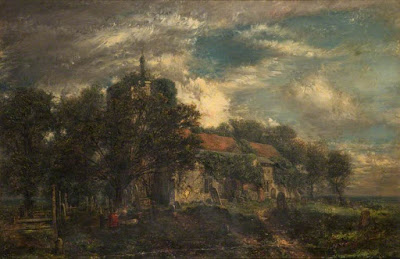 Henry Anthony, "A Country Churchyard"
Posted by Stephen Pentz at 8:15 AM

My "commonplace' book, neatly written out in student days is full of poems about the transitoriness of life, and included Herrick and the Greek anthology. It has only been added to sparsely since, but I think I should start again and add all the evocative new poems for me which I find in your blog. Perhaps you can pinpoint this late addition for me: "Where death is, I am not, Where I am, death is not." (source =from the Greek)?.

E Berris: It's very nice to hear from you again. Happy New Year!

I think commonplace books are wonderful: I've been keeping them since my college days. I ought to go back and look at them more often. They will show me how much I've forgotten!

As to the source of the final lines you quote: the only thing that comes to mind are some lines by Matthew Arnold, which are a fragment from an unfinished verse drama he called "Lucretius." Arnold's lines are these:

For while we are, Lucretius, death is not,
And when death is, why, we have ceased to be --
So death can touch us never.

The lines can be found in Kenneth Allott's edition of The Poems of Matthew Arnold (Longmans, Green 1965), page 585, Fragment (i).

However, I suspect that Arnold's lines may have a Greek (or Roman?) source, as you suggest in your comment. I do not know what the source is. Although Allott's edition is annotated, he does not annotate this fragment by suggesting a source. I suspect that further digging would lead us to the original.

Death is a natural subject for poets; they speaks on our behalf about our deepest passions and fears. One of my favorite poets -- often accused of being preoccupied with death -- is Emily Dickinson. I've posted something this morning that ties in nicely with your posting.
http://beyondeastrodredux.blogspot.com/
Perhaps you will visit and help with an explication.
And, once again, I must tell you how much I have enjoyed visiting and savoring your posting (even though you remind me of something that is encroaching upon me much too quickly). v/r R.T. (Tim)

“Why should I fear death?
If I am, then death is not.
If Death is, then I am not.
Why should I fear that which can only exist when I do not?
Long time men lay oppressed with slavish fear.
Religious tyranny did domineer.
At length the mighty one of Greece
Began to assent the liberty of man.”

Stephen and E.Berris: I believe the quotation is from Epicurus. Accordingly, it makes perfect sense that Arnold might have adapted those lines for his Lucretius.

R.T.: I agree with you about death being a natural subject for poets. As for those who suggest that Dickinson is "preoccupied with death," I think a poet would be remiss if he or she did not address the subject. With respect to the poem of hers that you posted today: as is often the case with her poetry, I can't make head or tail of it. She usually makes me feel very stupid. Mind you, this is not a criticism of her: the fault is mine, not hers. I've never been able to get in synch with her way of thinking and, on a practical level, with her syntax.

I think what I need to do is at some point immerse myself in her poetry for a period of time, so that I can get a feel for how it works and how she thinks. For instance, Gerard Manley Hopkins's poetry always seemed odd and hard to fathom until I made a concerted effort to spend some time with it in order to let it sink in. He still puzzles me, and the poems can still be frustrating, but I now have a better feel for, and appreciation of, what he was trying to do. (At least I like to think so! Perhaps not.) I need to do the same thing with Dickinson.

Fred: Thank you for that! So the source is Greek. As you can see from his comment, Mr. Owens has also confirmed Epicurus as the source. Thank you again.

Mr. Owens: Thank you for the information confirming the source of the quotation, as well as for providing the connection with Arnold's "Lucretius." I am essentially ignorant of Lucretius's work, but I do know of his indebtedness to Epicurus, so, as you say, Arnold's use of the lines is not surprising. Thanks again.