The appearance of Robert Frost's "Neither Out Far Nor In Deep" in my previous post got me to thinking about other poems with seaside settings. The comments that I made in my June 5 post about the calming effect of seascapes, and their ability to induce reverie, also come to mind.  Of course, any pleasing natural setting has the capacity to calm us and to lead us into reverie.  But I confess to being partial to the sort of reverie that seaside locations are wont to provoke.

In saying this, I do not intend to scant the particular evocative qualities of, say, mountains or forests or cornfields or streams.  For instance, I have said here before that I would be happy to spend eternity lying beneath the boughs of a tree on a sunny day as the fluttering leaves -- in kaleidoscopic shades of green, shot through with sunlight, set against a blue sky -- whisper and rustle overhead in a soft breeze.  "The wings/Of doves among dim branches far above."  "Noon a purple glow."

Still, the coming-to-the-end-of-things feeling that haunts seasides is unique in its reverie-inducing qualities.  The feeling is equivocal and complex.  You may feel that you have exhausted all possibilities by arriving at the margins of land.  On the other hand, you may feel, as you gaze outward, that the possibilities are endless.  It depends on the day.  It depends on how your life has turned out.

Before the first visitor comes the spring
Softening the sharp air of the coast
In time for the first 'invasion.'
Today the place is as it might have been,
Gentle and almost hospitable.  A girl
Strides past the Northern Counties Hotel,
Light-footed, swinging a book-bag,
And the doors that were shut all winter
Against the north wind and the sea mist
Lie open to the street, where one
By one the gulls go window-shopping
And an old wolfhound dozes in the sun. 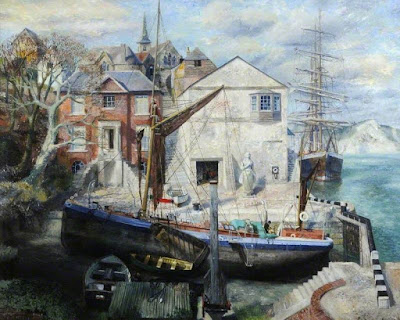 My beloved poets of the 1890s seem to have existed in a state of perpetual reverie.  "Out of a misty dream/Our path emerges for a while, then closes/Within a dream."  Hence, it is not surprising that, in their poems, we often encounter them sunk in thought in lonely autumn seaside villages or reclining on deep-green hillside swards above deep-blue harbors.  I find this very alluring.

Brittany was the favorite place of escape for Ernest Dowson.  Here is the final stanza of his "In a Breton Cemetery," which has appeared here in the past:

And now night falls,
Me, tempest-tost, and driven from pillar to post,
A poor worn ghost,
This quiet pasture calls;
And dear dead people with pale hands
Beckon me to their lands.

But Dieppe, not Brittany, was the quintessential seaside destination of the poets of the Nineties.  It offered them the best of both fin de siècle worlds:  a hint of urban decadence (bars and casinos) in a dreamlike natural landscape consisting of, by turns, fog, blinding sunlight, and mist. All unfolding on the edge of eternity.  With lurid sunsets.

Arthur Symons, Amoris Victima (Leonard Smithers 1897).  According to a note which accompanies the poem in his Collected Works, Symons wrote the poem in Dieppe on August 22, 1895.

As I have observed in the past, no one does this sort of thing better than the Nineties poets.  Of course, they are regarded as quaint and old-fashioned caricatures by moderns, who can only evaluate the past in terms of their own debilitating and distancing irony.  They cannot conceive of the possibility that the poets of the Nineties wrote poetry as if their lives depended on it. 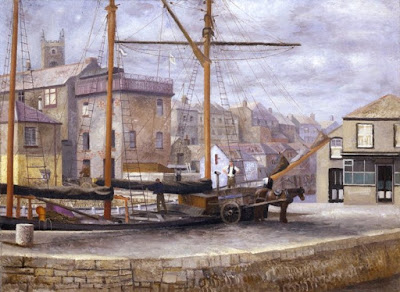 I sometimes imagine myself in my final years.  I see myself living in a small seaside town.  Any town, any sea, any country will do.  Each day I walk slowly along a promenade beside the sea.  The tides go in and out.  Along the promenade, at intervals, are deciduous trees.  Any type will do.  Each year, until the end, I watch the leaves come and go and the tides go in and out.  All possibilities will have been exhausted.  Yet the possibilities will still be endless.

The band packs in, the banners drop,
The ice-cream stiffens in its cone.
The boatman lifts his megaphone:
'Come in, fifteen, your time is up.' 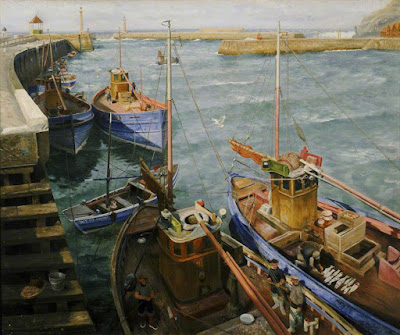 My daily walk takes me past a large meadow that slopes gently down for a quarter-mile or so to a bluff beside Puget Sound.  The meadow is covered with tall grasses, with a wild rose bush here and there.  At this time of year a single patch of purple-pink and purple-white sweet peas -- a rough circle about 30 or 40 feet in diameter -- is abloom in the center of the meadow, about halfway to the edge of the bluff.  Beyond the meadow the water stretches away to green-blue islands and to the Olympic Mountains.

The world is indeed Paradise.  Which we tend to forget.  I know I do.

O is it death or life
That sounds like something strangely known
In this subsiding out of strife,
This slow sea-monotone?

A sound, scarce heard through sleep,
Murmurous as the August bees
That fill the forest hollows deep
About the roots of trees.

O is it life or death,
O is it hope or memory,
That quiets all things with this breath
Of the eternal sea?

Arthur Symons, Silhouettes (Elkin Matthews and John Lane 1892). Symons wrote the poem in Dieppe on June 20, 1890.  It is part of a six-poem sequence titled "At Dieppe." 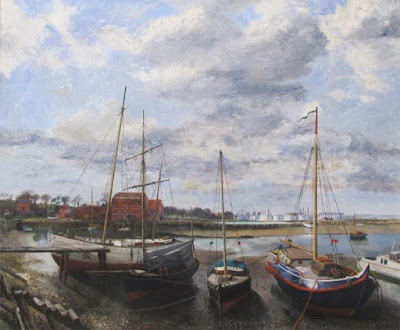 But one thing: As an old lady, could I suggest living in a beautiful area might not be as good as living with beautiful people who love you.

I think of "Dover Beach" where the sea is reduced to the sound of the receding waves. It's elegiac sadness uses the sounds of the sea to connect us back to ancient times. Do you know "By the North Sea" by Swinburne?

You have a very impressive blog and your quotations are lovely and powerful. Thank you.

Ms. Reyes: Thank you very much for your kind words about the post and the blog.

Your thought about the alternatives that are available to us in our lives is a good one. I didn't intend to -- and would never -- limit our options to one or the other, of course. It is entirely possible -- if one is fortunate -- to have both. Or to have neither. But, however things work out, we live our lives as best we can.

sunt_lacrimae_rerum: I greatly appreciate your kind words about the blog. Thank you very much.

Yes, "Dover Beach" fits well in this context, doesn't it? Your mentioning it brings to mind the opening lines of Arnold's "To Marguerite: Continued":

Yes! in the sea of life enisled,
With echoing straits between us thrown,
Dotting the shoreless watery wild,
We mortal millions live alone.

Thank you for the recommendation of Swinburne's "By the North Sea," which I have not read. I did find it on the internet: 524 lines! It will take some time to digest.

Thank you for visiting and for sharing your thoughts. I hope you'll return soon.

I *love* The Chinese Restaurant in Portrush by Derek Mahon. One of his best, I think.

Thanks for your insights as always. I have lived in London for many many years and I notice more and more that the lack of, and desire for, the presence of nature in my life does certain types of damage. I feel healthier even when I can walk more and spend more time in parks, but it's not the same. This may indicate how I need to think about my life and where I need to be in years to come. You know, I'm originally from almost the same part of the world as where you live (the West Coast - Vancouver Island for me) and I miss it.

Ms. Aykroyd: I agree with you about "The Chinese Restaurant in Portrush": it is one of my favorite Mahon poems as well. As you know, his poetry is filled with poems set by the sea. Another favorite of mine along these lines is "Kinsale": ". . . our sky-blue slates are steaming in the sun,/our yachts tinkling and dancing in the bay/like race-horses. We contemplate at last/shining windows, a future forbidden to no-one." I suspect you know it well.

Yes, I recall that you are from this part of the world. Having spent time on Vancouver Island over the years on vacations, I fully understand why you miss it. The combination of sea, sky, mountains, and forests out here is hard to beat. (Despite the rain and mist!)

It is a pleasure to hear from you again. As ever, thank you very much for visiting.

I only just stumbled upon your blog via a painting I found on Pinterest. I really like the poetry you choose...I shall be reading more of your lovely blog in due course, and am adding you to my blog-list.

Half-heard in the Stillness: Thank you very much for your kind words about the blog. And thank you as well for adding me to your blog list. I'm delighted that you found your way here, and I hope that you will return. Again, thank you.

Your mention of the Olympic Mountains leads me to wonder are you familiar with Gordon Hempton, the "sound tracker" behind the One Square Inch of Silence project in Olympic National Park? www.onesquareinch.org

I think you would enjoy Gordon's book also called One Square Inch of Silence. It is much the best of the various search-for-silence books that have come out in recent years. It is also all the richer for a trait I normally deplore - a certain digressive over-inclusiveness. I write a little more about it here https://seamussweeney.wordpress.com/2016/07/08/gordon-hempton-one-square-inch-of-silence-and-the-philosophy-of-silence/

Mr. Sweeney: Yes, I am familiar with Gordon Hempton, although I have not read One Square Inch of Silence. Based on your comments here, and on your fine discussion of the book on your site, I will track the book down. Thank you for mentioning it.

I was intrigued by this comment in your piece on the book: "Flight noise is one of Hempton's bete noires -- in fact his main bete noire." I was immediately reminded of the days after the 9/11 terror attacks, when all air traffic was suspended over here: the silence was striking. Of course, the events of that day were uppermost in my mind at that time, but when I went outside I could not help but notice the silence.

As ever, thank you very much for stopping by. I always appreciate hearing your thoughts.