I saw the sunlit vale, and the pastoral fairy-tale;
The sweet and bitter scent of the may drifted by;
And never have I seen such a bright bewildering green,
But it looked like a lie,
Like a kindly meant lie. 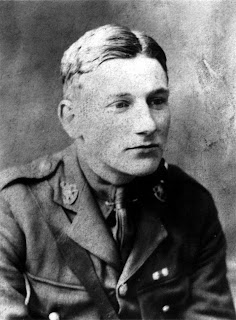 Edmund Blunden in December of 1916

The feelings expressed in these lines are explored at greater length in Blunden's "Report on Experience":

I have been young, and now am not too old;
And I have seen the righteous forsaken,
His health, his honour and his quality taken.
This is not what we were formerly told.

I have seen a green country, useful to the race,
Knocked silly with guns and mines, its villages vanished,
Even the last rat and last kestrel banished --
God bless us all, this was peculiar grace.

I knew Seraphina; Nature gave her hue,
Glance, sympathy, note, like one from Eden.
I saw her smile warp, heard her lyric deaden;
She turned to harlotry;  -- this I took to be new.

Say what you will, our God sees how they run.
These disillusions are His curious proving
That He loves humanity and will go on loving;
Over there are faith, life, virtue in the sun. 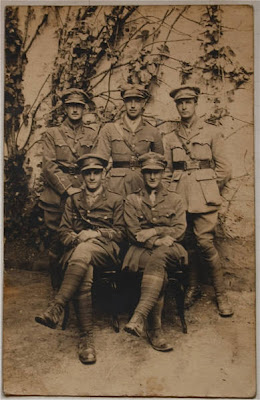 Blunden was by all accounts a kind, gentle man with a gift for friendship.  His poetry and prose are characterized by loving attention to the natural world.  But -- to borrow a word from the title of the book for which Blunden will likely be remembered -- the "undertones" of his war experience were never distant.  If you read Undertones of War, you understand why it could not be otherwise. 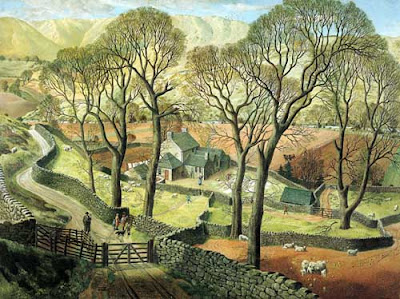 James McIntosh Patrick, "Springtime in Eskdale" (1935)
Posted by Stephen Pentz at 5:51 AM

Thank you for the introduction to Blunden. I'm drawn to the poem's sombre tone.

kinnareads: Thank you very much for visiting, and for leaving a comment. I am pleased that you like the poem by Blunden. If you explore his poetry further, you'll find that he isn't always so serious -- much of his work is, as I suggested, a celebration of the natural world. But the War did follow him around.

Thank you for visiting, Anonymous. What do the last lines of 'Report on Experience' mean? Hmmm. . . I am reluctant to paraphrase a poem, because that takes something away from the experience of reading it. And I cannot say that I know exactly what Blunden means. But, how about this: 'God works in mysterious ways.'

There's a curious afterlife to Blunden's poem. While at Oxford, Blunden was tutor to a New Zealander, John Mulgan, who later wrote a significant novel, Man Alone. Mulgan served in Greece with the SOE, and near the end of the war wrote a memoir to which he gave the title "Summary of Experience". Soon after completing it, Mulgan took his life. The memoir was later published, but the title changed to Report on Experience, in a quiet acknowledgement of Blunden.

Digger: thank you very much for visiting, and for the information about John Mulgan, his connection with Blunden, and his books -- I was not aware of him or his work, I'm ashamed to say. I see that Report on Experience was recently republished (in 2010) by the U.S. Naval Institute Press. Thank you again.

A breath of fresh air. BTW, his collection Near and Far was reviewed the same week as Hamish Maclaren's Sailor with Banjo. Take a look. Both real, wonderful poets. Thanks

Anonymous: thank you very much for visiting, and for your comments.

Having just published a blog of my own on Blunden, I read your pieces with interest and pleasure. Auden wrote of "...a low dishonest decade" and yet men like Blunden left something, which although I find uncomfortable at times, is memorable and free from ill-will to his fellow man. That and the art of the brothers Nash or Eric Ravilious and there are gems that can be plucked from the ashes.

The Scotsman: thank you very much for visiting, and for your thoughts. And thank you as well for the link to Literary Taste: what a wonderful undertaking! However, I'm still not sure if I have figured out the graphs yet! It appears that Blunden did quite well. I will keep track of your progress.