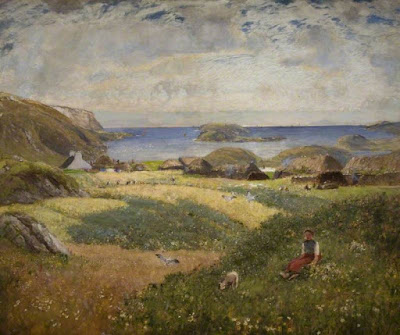 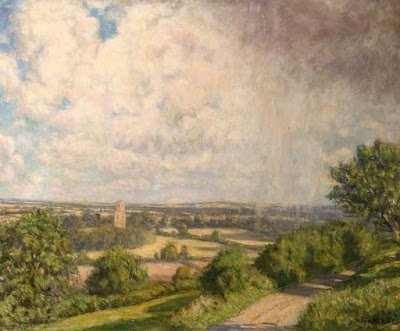 I hope you are fully recovered. Please do look after yourself.

The little poem is excellent; it sits very well alongside a lot of what you have reproduced here. More, please!

Do hope you will soon be feeling compleltely well again. I too love De La Mare and his strange and elusive verses. I though t you might be interested to read this. https://www.theguardian.com/books/2006/jun/10/booksforchildrenandteenagers.featuresreviews

I was very concerned to hear of your brush with death. I do hope you have recovered and will continue to be healthy and happy for many years yet.
I have to admit that this is a very selfish wish, as I love to read your blog posts. So for the sake of all of us who look to your words and pictures, please keep well!
Jane x

lovely and trenchant poems... sorry to hear about the erratic pump... i have a similar problem: i found a pill that works fairly well: "Heart Calm"; it controls most of my palpitations...

How little we know, indeed. Best wishes and good health!!

Sam Vega: Thank you very much for your thoughts. That episode has passed; now further tests will begin. But I am no longer "breathless," and feel much better.

Thank you also for your kind words about the poem. That's very nice of you to say. I have a binder of them, although I'm wary of inflicting them on others. But, of course, I am greatly pleased that you liked it.

Thank you again. It is always a pleasure to hear from you.

Ms. Vass: I greatly appreciate your thoughts. Thank you.

And thank you also for the link to the article on de la Mare, which I hadn't seen before. It provides a fine introduction to de la Mare and his work. "Strange and elusive" is an apt phrase to describe his poetry, both his "adult" poems and his "children's" "rhymes and verses." (Although, as you know, his "children's" poems are (like "The Song of the Mad Prince") never merely "children's" poems. Adults will miss a great deal if they pass them over). I grow fonder and fonder of his poetry with each passing year, and I am always happy when I discover that he means a great deal to others as well. We need to keep his work alive.

Jane: Thank you very much for your kind thoughts, which mean a great deal to me. As I noted above in my reply to Sam Vega's comment, I am feeling much better. I am just glad that I found out about this condition now, rather than later.

As ever, it is good to hear from you. Thank you again.

Mudpuddle: Thank you for your thoughts. And I'm pleased you liked the poems.

I appreciate your recommendation of "Heart Calm." In looking into it, I was interested to see that magnesium is one of its key components: I started taking a magnesium supplement a few years ago for general health purposes. I'll see what the cardiologist puts me on, but this looks like a good idea as well.

Mr. Post: Thank you very much for your kind thoughts. Yes, "how little we know." But these sorts of proverbial wake-up calls can be a good thing.

Thank you again. It's nice to hear from you.

Hope it is all manageable Stephen - I think maybe only you could call a stay in hospital an 'idyll' !

Maggie Emm: Thank you for your thoughts. Well, perhaps it was an "idyll" mostly in retrospect: there were a few thought-provoking moments, together with an IV line and beeping monitors. But things are now under control.

Thank you again. I appreciate your concern.

Stephen , I'm glad to hear you are recovering well. These incidents can be very frightening.

Thanks for sharing De La Mare's Song of the Mad Prince. I think you know from past communications how much I adore his poetry. Mysterious, elusive and magical, his poems are all of these things. I was fortunate enough to pick up both his Complete Poems and his Collected Rhymes for Children, the second beautifully illustrated by Erroll Le Cain when both volumes were being discarded by one of our campus libraries. Hard to believe I Know,very sadly true.

I am staying in a cottage on the Norfolk/Suffolk border at the moment with my wife where the weather is very hot, 31 degrees Celsius. We have managed two lovely country walks despite the heat. The next few days look set to cool down by a few degrees so hopefully our walks will be a little more comfortable and we can venture further. The heat has made walking any significant distance very tiring.

Thank as ever for your wonderful posts. I hope you continue to feel better with each passing day.

I am glad you are still with us. I hope also that your cardiologist has some plausible advice, that you will follow it, and that it will do you good.

I was distressed to read of your health issues. I do hope for your recovery and a good follow-up. The poems are lovely - I think we'd all appreciate seeing anything of your own as well as the wonderful poems you select to express what the universe is bringing about in your life. It so often parallels our own.
Take care, be well.
Mary

John: It's good to hear from you again. I appreciate your thoughts about my recent episode. Thank you. Such is the aging process. But I have no complaints. One has to keep a positive outlook in the face of the inevitable. I've always resolved to not be a querulous complainer about my health as I get older. We'll see if I keep my resolution!

Your were lucky to find the de la Mare books: they are hard to come by these days, as you know. I agree that it is sad to see them discarded from a library. All too common for a great deal of poetry, alas. But it's up to those of us who love de la Mare and other now neglected poets to keep their poetry alive. I'm convinced that there will always be a small group of those who understand the value of these poets, and we need to do what we can to preserve their legacy.

It has been extremely hot in England this summer, hasn't it? Your comment about the heat brought to mind the painting on the dust-jacket of a book I believe we have talked about before: Ronald Blythe's Going to Meet George and Other Outings. As you'll recall, the painting is Lawrence Alma-Tadema's "94 Degrees in the Shade." Given Blythe's connection with Suffolk, and your holiday in that area, it seems apt.

As always, thank you very much for stopping by. I hope that all is well.

George: Thank you very much for your kind thoughts. I am very happy with the cardiologist to whom I was referred: very thorough, and very good at explaining things. His advice has been wise, and I intend to follow orders. I appreciate your concern. Thanks again.

Mary: I greatly appreciate your concern and your kind words. Thank you so much.

I'm pleased you liked the poems. As I mentioned in my response to Sam Vega, I do have poems hanging around, but I am reluctant to inflict them on my defenseless readers. But of course I'm flattered and grateful to hear your encouraging words.

Thank you again for your thoughts, which mean a great deal to me.

I could not refrain from commenting. Very well written!

All the best to you for a return to good health. Cardiologists these days are miracle workers. Our age is indeed the best of times and the worst of times.

I am worry to read of your health issues - I imagine that it came as something of a shock to the system. I trust you are on the mend again now.

A lovely choice of poems (as always).

The paintings too. I know Horton Tower (a folly) and I've had some lovely walks around there, and the local henge monument at Knowlton which was Christianized with a church in the 12th C. Happy Dorset memories.

Mr. Guirl: It's a pleasure to hear from you again. Thank you very much for your kind thoughts. Yes, I have nothing but good things to say about all of the care givers that I came into contact with during this experience, both as good people and as professionals. Given my recurring skepticism on this blog about Science and Progress, I feel that I am quite a hypocrite! In the end, one always returns to gratitude.

Thank you again. And, as ever, thank you for visiting.

Anonymous: Thank you very much for your concern. And thank you as well for being a long-time visitor here, which I greatly appreciate.

Bovey Belle: I'm happy to hear from you again. Thank you very much for your thoughts. Things are under control now. As I mentioned above, I'm relieved that I found out about this condition now, rather than have it be a more dangerous surprise later.

I'm pleased you liked the poems. Thank you for the background about Horton Tower. Of course you would you know of it, given your Dorset history! I hope you've had a chance to visit Hardy's poems or novels since we last talked. I've been thinking recently that it's past time for me to visit him.

I hope that all is well with you and your family. Thank you again for your concern. As always, thank you for visiting. Please return soon.

oh good ! i can renew your icon's lease on my desktop. hurrah !

Stephen,
Sending you the best of wishes and hopes for a speedy recovery, and of course, sincere thanks for all you do on this blog, your selection of poems are always thought provoking and your comments insightful.
Kind regards
Bernadette

tristan: My apologies for the delayed response. Thank you very much for your thoughts. Yes, the icon remains viable! I hope for quite some time. Thank you again.

Bernadette: Please accept my apologies for the delayed response. Thank you very much for your thoughts, and for your kind words about the blog.

It's a pleasure to hear from you again. I greatly appreciate your long-time presence here. Thank you again.