How To Live, Part Twenty-Nine: Some Things Never Change

I am easy to please.  Each summer, I take delight in watching the tree tunnels I love further deepen, further interlace, as the boughs extend themselves outwards and upwards.  I notice the empty spaces that remain high up in the green and restless canopy, the sky that remains open, and I wonder how many years will pass before new bridges of leaves arch overhead.  Will I be here to see it happen?  Perhaps not. After all, I am merely an onlooker, passing through.  This is neither a lament nor a complaint.  To be aware that one is part of an ever-changing yet timeless World is a source of serenity.
The Truisms
His father gave him a box of truisms
Shaped like a coffin, then his father died;
The truisms remained on the mantelpiece
As wooden as the playbox they had been packed in
Or that other his father skulked inside.
Then he left home, left the truisms behind him
Still on the mantelpiece, met love, met war,
Sordor, disappointment, defeat, betrayal,
Till through disbeliefs he arrived at a house
He could not remember seeing before.
And he walked straight in; it was where he had come from
And something told him the way to behave.
He raised his hand and blessed his home;
The truisms flew and perched on his shoulders
And a tall tree sprouted from his father's grave.
Louis MacNeice, Solstices (Faber and Faber 1961).
As is often the case with MacNeice, there is an undertone of ironic knowingness present in "The Truisms," but I am willing to take the poem at face value.  As I have noted here before, I am quite content to live my life in accordance with certain truisms because, well, they are true. 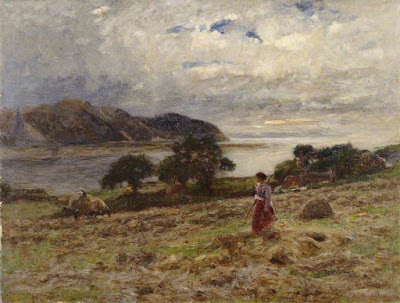 Joshua Anderson Hague (1850-1916), "Landscape in North Wales"
Given the clamor of catastrophe and crisis we human beings are so fond of (2020 is no different than any other year in the history of humanity in this regard), an awareness of the World's continuity is not a bad thing.  It's not as if the World hasn't seen it all before.  Each of us has seen it all before as well, unless we haven't been awake.
"Whoever lives two or three generations feels like the spectator who, during the fair, sees the performances of all kinds of jugglers and, if he remains seated in the booth, sees them repeated two or three times.  As the tricks were meant only for one performance, they no longer make any impression after the illusion and novelty have vanished."
Arthur Schopenhauer (translated by E. F. J. Payne), "Additional Remarks on the Doctrine of the Suffering of the World," in Parerga and Paralipomena: Short Philosophical Essays, Volume 2 (1851; Oxford University Press 1974), page 299.
Crofter
Last thing at night
he steps outside to breathe
the smell of winter.
The stars, so shy in summer,
glare down
from a huge emptiness.
In a huge silence he listens
for small sounds.  His eyes
are filled with friendliness.
What's history to him?
He's an emblem of it
in its pure state.
And proves it.  He goes inside.
The door closes and the light
dies in the window.
Norman MacCaig, in Ewen McCaig (editor), The Poems of Norman MacCaig (Polygon 2005). 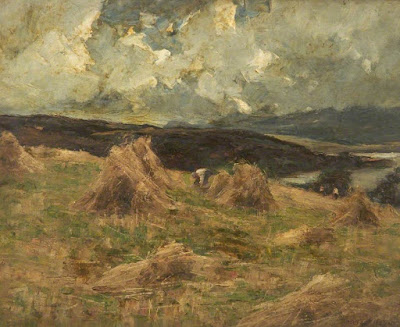 Joshua Anderson Hague, "Late Autumn"
In January of 2019, I wrote here about the falling of a nearby big-leaf maple in a winter storm.  Yesterday afternoon, I walked past the space it once occupied.  I still feel the loss.  But its companions remain, and I know that in time the emptiness of the air will be filled.
Thoughts on T'ien-chin Bridge
The countless great lords and statesmen of past regimes --
later ages know them merely as a list of names.
Only the water under T'ien-chin Bridge
goes on year after year,  making the same sound.
Shao Yung (1011-1077) (translated by Burton Watson), in Burton Watson, The Columbia Book of Chinese Poetry: From Early Times to the Thirteenth Century (Columbia University Press 1984), page 336. 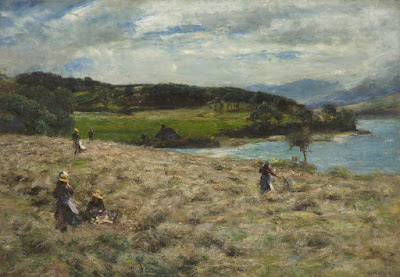 Joshua Anderson Hague, "Haymaking"
Posted by Stephen Pentz at 12:45 AM

Maybe I'm easy to please too, but I certainly enjoyed this.

Thank you. What a wonderful way to start the week. MacCaig's "Crofter" reminded me of a number of things I've been lax about when Chap, my dog, and I take our final walk around the yard each night. "His eyes/are filled with friendliness." That's the way to see the world. I love your personal observation: "After all, I am merely an onlooker, passing through." When people ask me what I do I like to say, "I am a walker, looking." As usual, your poetic perambulations sent me exploring new paths. This morning, because of MacCaig's poem, I looked up more of his work. At The Poetry Foundation I found, "A Good Day," which made mine better. It begins with the hyphenated construction "Sun-stunned," which is an apt description for an experience of tree crown light. Wallace Stevens would have loved that. Permit me to be a librarian for a moment and "highly recommend" you look up "A Good Day" in your MacCaig collection. I will do the same, soon. I'm going to order a copy of his collected poems, today. Thanks again. Have a swell week.

Danish dog: Thank you very much.

It's good to hear from you again. I'm happy to know that you are still stopping by. I greatly appreciate your long-time presence here. Take care.

Mr. Maruskin: I'm pleased you liked the post. Thank you very much.

Yes: "His eyes/are filled with friendliness" is lovely, isn't it? It took me aback when I first encountered the poem, and it still strikes me whenever I return to it.

I'm delighted to hear you will be picking up a copy of MacCaig's collected poems. Hours and hours of pleasure await you. In my humble opinion, I suspect you will be returning to his poems over the years. He was quite prolific, so whenever I return to his poetry, I still find new gems. (He is like Hardy and Christina Rossetti in that regard, at least for me.)

Thus, I hadn't yet read "A Good Day," so I appreciate your pointing it out. I agree with you: I have now read it, and it is wonderful. It reminds me of the observations you and I have shared about our walks, and the life of the meadows. A great deal of MacCaig's poetry is like that. (To borrow your phrase: he was always "a walker, looking.") The reference to the heron caught my attention: we have quite a few blue herons in this neck of the woods (for instance, a tall and expansive evergreen tree full of nests is along the Ship Canal about two miles away from where I live), and MacCaig captures what a delight they are. "A heron, folded round himself,/Stands in the ebb": exactly; I have seen that many a time (but, of course, I could never express it the way MacCaig does).

The MacNeice "Truisms" poem brought to my mind (as I'm sure it did to many others) Kipling's "The Gods of the Copybook Headings":

As I pass through my incarnations in every age and race,
I make my proper prostrations to the Gods of the Market Place.
Peering through reverent fingers I watch them flourish and fall,
And the Gods of the Copybook Headings, I notice, outlast them all.

We were living in trees when they met us. They showed us each in turn
That Water would certainly wet us, as Fire would certainly burn:
But we found them lacking in Uplift, Vision and Breadth of Mind,
So we left them to teach the Gorillas while we followed the March of Mankind.

We moved as the Spirit listed. They never altered their pace,
Being neither cloud nor wind-borne like the Gods of the Market Place,
But they always caught up with our progress, and presently word would come
That a tribe had been wiped off its icefield, or the lights had gone out in Rome.

When the Cambrian measures were forming, They promised perpetual peace.
They swore, if we gave them our weapons, that the wars of the tribes would cease.
But when we disarmed They sold us and delivered us bound to our foe,
And the Gods of the Copybook Headings said: "Stick to the Devil you know."

On the first Feminian Sandstones we were promised the Fuller Life
(Which started by loving our neighbour and ended by loving his wife)
Till our women had no more children and the men lost reason and faith,
And the Gods of the Copybook Headings said: "The Wages of Sin is Death."

In the Carboniferous Epoch we were promised abundance for all,
By robbing selected Peter to pay for collective Paul;
But, though we had plenty of money, there was nothing our money could buy,
And the Gods of the Copybook Headings said: "If you don't work you die."

Then the Gods of the Market tumbled, and their smooth-tongued wizards withdrew
And the hearts of the meanest were humbled and began to believe it was true
That All is not Gold that Glitters, and Two and Two make Four
And the Gods of the Copybook Headings limped up to explain it once more.

As it will be in the future, it was at the birth of Man
There are only four things certain since Social Progress began.
That the Dog returns to his Vomit and the Sow returns to her Mire,
And the burnt Fool's bandaged finger goes wabbling back to the Fire;

And that after this is accomplished, and the brave new world begins
When all men are paid for existing and no man must pay for his sins,
As surely as Water will wet us, as surely as Fire will burn,
The Gods of the Copybook Headings with terror and slaughter return!

There's some wisdom there, I think, but we've likely passed the point where we're able to heed it, much less even hear it.

Mr. Parker: I hadn't thought of this in connection with "The Truisms," so I thank you for sharing it. It's been a while since I've visited it, so I appreciate your sharing it now. I agree that the two poems go together well.

As for your final thought: part of me agrees with you, but another part of me says that it has ever been thus. (Although there are certainly moments when I think the world has indeed gone to Hell in a hand-basket.) I needn't tell you that the world has always been subject to fits of madness and know-nothingness among swathes of true believers. The particulars may change, but the periodic irruptions have a great deal in common. On the other hand, it has also always been the case that the true, good, and beautiful are preserved, and passed on, by a relative handful of people from generation to generation.

You are likely familiar with Hardy's poem "Mute Opinion," which has resurfaced in my mind more than a few times in recent weeks. In the end, humanity's history is "outwrought/Not as the loud had spoken,/But as the mute had thought." Wishful thinking on my part? Whistling past the graveyard? Perhaps. But I am not changing the way I live.