A distant, recurring sound on an autumn night.  A human sound, redolent, mysterious, evanescent.
In Early Autumn, Alone at Night
The leaves of the paulownia move in the cool breeze;
The neighbour's fulling mallet sends out the voice of autumn.
I turn and sleep beneath the eaves;
Waking, the moonlight is half across my couch.
Po Chü-i (772-846) (translated by R. H. Blyth), in R. H. Blyth, Haiku, Volume 4: Autumn-Winter (Hokuseido Press 1952), page 179.
Another translation of the poem:
Early Autumn, Alone at Night
Parasol tree by the well, cold leaves stirring;
nearby fulling mallets that speak an autumn sound:
I sleep alone facing the eaves,
wake to find moonlight over half the bed.
Po Chü-i (translated by Burton Watson), in Po Chü-i, Selected Poems (edited and translated by Burton Watson) (Columbia University Press 2000), page 7.
The sound of fulling mallets (or, as they are also called, "fulling blocks") in the night signifies autumn in traditional Chinese poems. "It was customary in the autumn to pound cloth in the process known as fulling to make it suitable for use in winter clothes."  (Burton Watson, The Columbia Book of Chinese Poetry: From Early Times to the Thirteenth Century (Columbia University Press 1984), page 176.) Often, the sound is made by women who are preparing cloth for use in the winter clothes of their lovers or husbands, who are away in the army, anticipating a winter campaign.
A small thing?  Perhaps.  But it gives one pause.  "A thing is beautiful to the extent that it does not let itself be caught."  (Philippe Jaccottet (translated by John Taylor), from "Blazon in Green and White," in Philippe Jaccottet, And, Nonetheless: Selected Prose and Poetry 1990-2009 (Chelsea Editions 2011), page 53.) 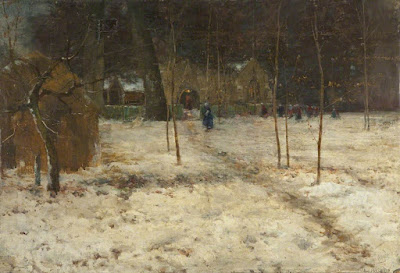 Claude Hayes (1852-1922), "Evensong" (1903)
Given the considerable influence of Chinese poetry (particularly the poetry of the T'ang dynasty) on Japanese poetry, fulling blocks are also a common presence in Japanese poems (both waka and haiku) of autumn.  (In Japan, Po Chü-i was the most popular T'ang dynasty poet.  Thus, it is likely that the poem which appears above was well known to Japanese poets.)  The Japanese word for fulling blocks is kinuta. "Kinuta, a wooden mallet and block used to full cloth in the autumn. In poetry, the sound of fulling was associated with the loneliness of a woman left waiting for a traveling husband." (Steven Carter, Traditional Japanese Poetry: An Anthology (Stanford University Press 1991), page 136.)
Fulling Block
When the wind passes
in the pines, autumn already
seems lonely enough —
and then a fulling block echoes
through Tamakawa Village.
Minamoto no Toshiyori (1055-1129) (translated by Steven Carter), Ibid, page 136.
The poem above is a waka, but the theme appears in haiku as well. For instance:
Walking along the narrow path,
Listening to the far-off
Fulling block.
Buson (1716-1784) (translated by R. H. Blyth), in R. H. Blyth, Haiku, Volume 4: Winter-Autumn, page 32.
Buson is chronologically the second of the four traditional great haiku poets: he follows Bashō, and precedes Issa.  The fourth of the greats is Shiki, who wrote this:
In one house,
A voice of weeping,
The sound of the fulling block.
Shiki (1867-1902) (translated by R. H. Blyth), Ibid, page 34.
A disembodied sound from somewhere out in the night.  Yet there is a slender human thread.  One pays attention.
Unheard, these two days,
The fulling block
Of my neighbour.
Buson (translated by R. H. Blyth), in R. H. Blyth, Haiku, Volume 3: Summer-Autumn (Hokuseido Press 1952), page 336. 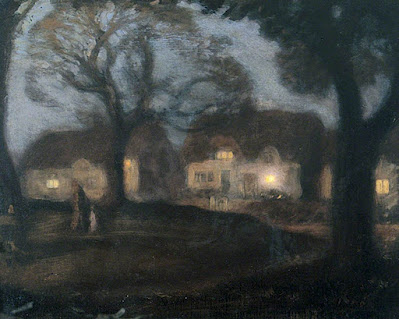 George Clausen (1852-1944), "The Village Green at Night"
The World consists of slender threads, doesn't it?  Earlier this week, I saw two sparrows bathing in a puddle, in the morning sun.  I couldn't help but feel they were the first sign of Spring.  Yesterday I noticed that buds have appeared on a row of pear trees in front of a nearby house.  The blue herons have returned to their nests high in the tall pines beside the Ship Canal.  And soon the crocuses will begin to emerge.  "From now on, listening only to the flowers' counsel, antecedent to all knowledge . . ."  (Philippe Jaccottet (translated by Tess Lewis), notebook entry in September, 1983 (ellipses in the original text), in Philippe Jaccottet, The Second Seedtime: Notebooks 1980-1994 (Seagull Books 2017), page 57.)
Why should little things be blamed?
Little things for grace are famed;
Love, the winged and the wild,
Love is but a little child.
Anonymous (translated by Thomas Percival Rogers), in Henry Wellesley (editor), Anthologia Polyglotta: A Selection of Versions in Various Languages, Chiefly from The Greek Anthology (John Murray 1849), page 259.
Slender threads.  Little things.  They all add up.
The clear voice
Of the fulling block echoes up
To the Northern Stars.
Bashō (1644-1694) (translated by R. H. Blyth), in R. H. Blyth, Haiku, Volume 4: Autumn-Winter, p. 31. 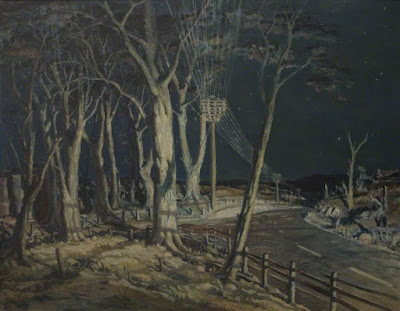 Such beautiful peaceful poems today. Here in Wales, the fulling mills once littered every valley bottom, rushing Welsh streams and rivers providing the power for the fulling mills, the sheep the fleece for the mills, the alder trees drew the clog makers, whose trimmings fuelled the dye vats. I imagine it was a similar situation in rural China and Japan too, only it sounds on a more individual basis. The sound of the fulling was obviously a constant in many people's lives.

Bovey Belle: Thank you for the kind words about the post. And thank you as well for the information about the fulling mills in Wales, which I was not aware of. After receiving your comment, I checked the internet and found lovely photographs of the mills beside the rivers and streams. A vanished world.

You are correct: the sound of fulling in Chinese and Japanese poems is that of a solitary person, and evokes loneliness amid the dark chillness of autumn. That being said, I have seen Japanese ukiyo-e prints depicting groups of women (in kimonos!) engaging in fulling (likely family members, or perhaps servants to a noble family).

As always, it is good to hear from you. From your blog, it appears that you are getting settled into your new home at last. The area you live in looks lovely. Thank you very much for stopping by.