Recently I've been spending time with The Oxford Book of Greek Verse in Translation.  Published in 1938, and edited by T. F. Higham and C. M. Bowra, it contains short lyric poems and epigrams, as well as excerpts from epics, long poems, and plays.  Whenever I visit the Greek world I am reminded that human nature has never changed, and never will.  Our capacities for good and evil, nobility and folly, and everything in between, remain constant.
Another anthology of Greek verse to which I often return is F. L. Lucas' Greek Poetry for Everyman.  The epigraph of the volume consists of an untitled poem by Lucas:
Where lowlands stretch for ever,
Rank pasture, mud-banked river,
And bullocks flick and browse,
And flies carouse;
Or the city's smoke-pall thickens
And the sullied sunlight sickens --
There the heart cries "How far
The mountains are!"
Till, on some windless even,
Vast cloud-peaks rampart Heaven,
And sunset hues with rose
Their timeless snows;
Above this age's shuffle,
Its buzz, and rush, and scuffle,
So towers, far off, at peace,
The world of Greece.
F. L. Lucas (editor and translator), Greek Poetry for Everyman (J. M. Dent 1951), page vii.
By returning to the verse of ancient Greece (and of the Hellenistic world) am I abandoning the modern world, while romanticizing -- or imagining -- a world of golden light that may have never existed?  But of course.  Why not? 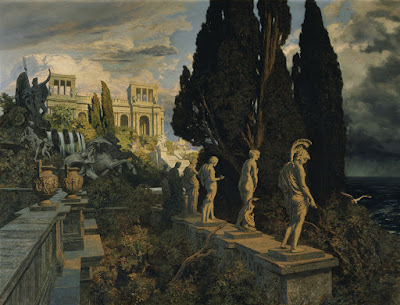 Leopold Rothaug (1868-1959), "Classical Landscape" (1939)
Beauty and Truth present themselves to us in fragments, not all at once in a seamless web.  If such a seamless web exists, it is beyond our ken in this World.  Now and then we glimpse scattered threads, or what might be emerging patterns.  To use a phrase from William James which I quoted in my most recent post: "higher energies filter in."  (William James, The Varieties of Religious Experience: A Study in Human Nature (Longmans, Green, and Co. 1902), page 519.)  Still, fragmentary Beauty and Truth are enough to keep one occupied for a lifetime.
Such is the case with Greek verse, a great deal of which survives only in fragments: the lovely, beguiling, affecting remnants of otherwise lost poems and plays.  In returning to The Oxford Book of Greek Verse in Translation this time around, I have been reading fragments of plays, known only by their titles (if that) and a few surviving scattered lines.  The lines quoted hereafter all come from these vanished works.  Unavoidably out of context, but, in their isolation, gemlike.
Last peaks of the world, beyond all seas,
Wellsprings of night, and gleams of opened heaven,
The old garden of the sun.
Sophocles (translated by Gilbert Murray), in T. F. Higham and C. M. Bowra, The Oxford Book of Greek Verse in Translation (Oxford University Press 1938), page 385.
Yes, of course: the golden light, wine-dark sea, and star-filled sky of Greece.  The eternal Hesperian gardens we all long for.  But there is a simpler, more down-to-earth side to this Paradise as well:
Ah, what joy
Can out-joy this -- to reach the land -- and then
Safe lodged, with happy drowsing sense to hear
The raindrops pattering on the roof outside!
Sophocles (translated by Walter Headlam), Ibid, page 383.
The rainy evening described by Sophocles is part of the World of lovely commonplaces that one comes across so often in these fragments, and also, for instance, in the epigrams of The Greek Anthology.  A reminder that one of the things that enchants us about the Greek world is its day-to-day intertwining of life and art.
There is no comfort in adversity
More sweet than Art affords.  The studious mind
Poising in meditation, there is fixed,
And sails beyond its troubles unperceiving.
Amphis (4th century B.C.) (translated by T. F. Higham), Ibid, page 526.
But another thread winds in and out of the beautiful fragments as well, never out of sight or mind.
Alas, how right the ancient saying is:
We, who are old, are nothing else but noise
And shape.  Like mimicries of dreams we go,
And have no wits, although we think us wise.
Euripides (translated by C. M. Bowra), Ibid, page 455. 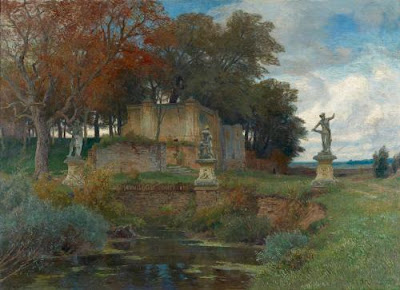 Hugo Darnaut (1851-1937), "Sunken Splendor" (1900)
"Mimicries of dreams."  Even an idealized Greece would not be Greece without an abiding and pervasive awareness of our evanescence.
But my fate, on some throbbing wheel of God,
Always must rise and fall, and change its being:
As the moon's image never two nights long
May in one station rest: out of the dark
The young face grows, still lovelier, still more perfect,
Then at the noblest of her shining, back
She melts and comes again to nothingness.
Sophocles (translated by Gilbert Murray), Ibid, page 384.
It ought not to take a year of plague to remind us of our mortality.  Any good poet has death on his or her mind.  "The paradise of Flowers' and Butterflies' Spirits."  (Samuel Taylor Coleridge, in Kathleen Coburn (editor), The Notebooks of Samuel Taylor Coleridge, Volume 1: 1794-1804 (Pantheon Books 1957), Notebook Entry 1736 (December 1803).)  "A rainbow balanced on an empty house in a verdant combe."  (Philippe Jaccottet, The Second Seedtime: Notebooks, 1980-1994 (translated by Tess Lewis) (Seagull Books 2017), page 150.)  In this World, how could it be otherwise?  Why would we want it to be otherwise?
Mourning your dearest friends, be wise in grief,
They are not dead, but on that single road
Which all are bound to travel, gone before.
We too, in after days, shall overtake them;
One road-house shall receive us, entered in
To lodge together for the rest of time.
Antiphanes (4th century B.C.) (translated by T. F. Higham), Ibid, page 518.
There is no turning away.  Greek verse is full of touching laments and epitaphs for the departed.  And there is no shortage of contemplations upon the dark, endless silence of death, where all are shorn of memories.  "Emptily from here to Hades floats the echo,/Hushed among the dead.  My voice goes down the night."  (Erinna (4th century B.C.) (translated by C. M. Bowra), Ibid, page 522.)  The poets, in all times and in all places, tell us there can be no turning away.  "And yet we all in the end live, do we not, in a phantom dwelling?  But enough of that -- I'm off to bed."  (Bashō (1644-1694), "Record of the Hut of the Phantom Dwelling," in Burton Watson (translator), Four Huts: Asian Writings on the Simple Life (Shambhala 2002), page 95.)
No mortal is born free from suffering: --
He buries children, and begets him new,
And also dies himself.  And yet men grieve
At bringing earth to earth!  It is Fate's will
To reap Life's harvest like the fruited ear,
That one should be, one not.  Where is there cause
For grief, when only 'tis the path of Nature?
Nothing is dread that Fate makes necessary.
Euripides (translated by Walter Headlam), Ibid, page 461. 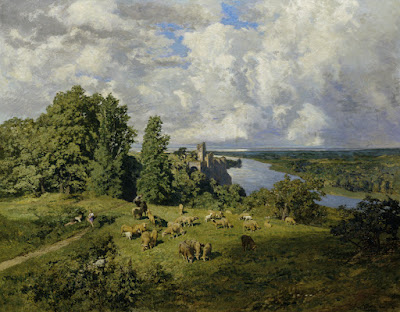 Those are beautiful fragments and gems! I am woefully unfamiliar with Greek literature, but when I read merely The Children's Homer recently I was struck by what a treasure that it is. Thank you for this inspiration, and for these several samples to enjoy.

Your musings on fragments brought to mind this poem by Priscilla Leonard.

Happiness is like a crystal,
Fair and exquisite and clear,
Broken in a million pieces,
Shattered, scattered far and near.
Now and then along life's pathway,
Lo! some shining fragments fall;
But there are so many pieces
No one ever finds them all.

You may find a bit of beauty,
Or an honest share of wealth,
While another just beside you
Gathers honor, love or health.
Vain to choose or grasp unduly,
Broken is the perfect ball;
And there are so many pieces
No one ever finds them all.

Yet the wise as on they journey
Treasure every fragment clear,
Fit them as they may together,
Imaging the shattered sphere,
Learning ever to be thankful,
Though their share of it is small;
For it has so many pieces
No one ever finds them all.

gretchenjoanna: Thank you for your kind words about the post. I'm pleased you liked the verse fragments. I find not only Beauty and Truth, but equanimity and nobility when I visit Greek poetry (recognizing that I am inevitably missing something by having to rely upon translations). These qualities seem to be in short supply in many quarters of the world these days (not all, of course).

Thank you for visiting again. It's good to hear from you. Take care.

Stephen, If “human nature has never changed” then “a world of golden light” is here now. Particularly here now as Tuna, my cat, and I watch a glorious Spring sunset. Happy Equinox.

I’m with Dogen: “Reflect now whether any being or any world is left out of the present moment.” ( “The Time Being,” Moon in a Dewdrop, Writings of Zen Master Dogen, ed. Kazuaki Tanahashi, North Point Press, 1985).

I like Antiphanes image of “that single road/ Which all are bound to travel.” I sometimes imagine great wheeling flocks of birds migrating carry souls aloft.

"And yet we all in the end live, do we not, in a phantom dwelling? But enough of that -- I'm off to bed." Bashō. Which resonates well with Sophocles (paraphrase), what joy can out-joy this happy drowsing.

It is always a pleasant surprise to read and think about your posts. Thanks. J

Esther: Thank you for sharing the poem, which is new to me, as is the poet. It fits well here. Shining fragments are enough. (I think of haiku, for instance.)

As ever, thank you very much for stopping by. I hope that all is well. Take care.

Mr. Maruskin: Thank you for sharing your thoughts about the post. The quotation from Dōgen is wonderful, and prompted me to seek out "Uji: The Time-Being" on the internet. I like the sentence which precedes the sentence you quoted: "Each moment is all being, is the entire world." (Haiku, for instance.) (For some reason, Dōgen's words bring to mind one of my favorite thoughts from Wittgenstein, which has often appeared here: "If we take eternity to mean not infinite temporal duration but timelessness, then eternal life belongs to those who live in the present." Tractatus Logico-Philosophicus, Proposition 6.4311.) I also like this from Dōgen's talk: "In essence, all things in the entire world are linked with one another as moments." Thank you.

I confess to having reservations about your thought that "[i]f 'human nature has never changed' then 'a world of golden light' is here now." I'm only qualified to comment on American culture since 1956, but, in my time, I've never seen a Euripides or a Sophocles among us. Or even, to speak of lesser mortals, a
Simonides, Callimachus, Anyte, or Leonidas of Tarentum. Of course, the "golden light" of which I speak is not limited to ancient Greece (I think of T'ang Dynasty China or 12th and 17th century Japan, for instance), but I'm afraid that not every age has it. But that's just me quibbling. Pay me no mind.

Thank you very much for visiting again, and for your kind words. Take care.