Matsuo Bashō and his haiku are with me throughout the year.  Their companionship is particularly delightful and moving in autumn, for many of Bashō's finest haiku were written in this season.  But I must catch myself, for I am always in danger of getting carried away when it comes to talking about Bashō, and his importance in my life.
To provide some distance, I will offer this by R. H. Blyth:
"The position which haiku has or should have in world literature may be brought out by comparing and contrasting Bashō with Shakespeare, Homer, Dante, Goethe and Cervantes.  If he can hold his own with these, the 17-syllabled haiku may well claim an equality with the world masterpieces of epic, drama, and lyric.
*     *     *     *     *
"In what point is Bashō equal or superior to these great men?  In his touching the very nerve of life, his unerring knowledge of those moments in time which, put together, make up our real, our eternal life.  He is awake in the world that for almost all men exists as a world of dreams.
"Bashō gives us the same feeling of depth as Bach, and by the same means, not by noise and emotion as in Beethoven and Wagner, but by a certain serenity and 'expressiveness' which never aims at beauty but often achieves it as it were by accident.  This comparison between Bashō and Bach may seem to be far-fetched.  They have little in common except their profound understanding of vital inevitability, and the meaning of death.  As Confucius implies, he who understands either life or death, understands both.  The hymn says, in its rather sentimental way,
Days and moments, quickly flying,
Blend the living with the dead,
and Bach and Bashō felt this so deeply that the average mind finds the one too intellectual and difficult, the other too simple."
R. H. Blyth, Haiku, Volume 4: Autumn-Winter (Hokuseido Press 1952), pages i and iii.
There is a great deal to digest in those passages, and I suspect there are many who would take issue with Blyth's assertions.  I will concede that Blyth was quite opinionated, but I would also suggest that there are very few who have known and understood both Japanese and Western literature and culture as well as Blyth has.  I am content to leave what he says about Bashō as it stands.
However, what is ultimately important is the poetry and the individual poem, not a contest between cultures.  Thus, as an introduction to Bashō and autumn, consider this:
This autumn,
How old I am getting:
Ah, the clouds, the birds!
Bashō (translated by R. H. Blyth), in R. H. Blyth, Haiku, Volume 3: Summer-Autumn (Hokuseido Press 1952), page 334.
Or this:
The autumn moon;
I wandered round the pond
All night long.
Bashō (translated by R. H. Blyth), Ibid, page 385.
Or this:
Along this road
Goes no one,
This autumn eve.
Bashō (translated by R. H. Blyth), Ibid, page 342. 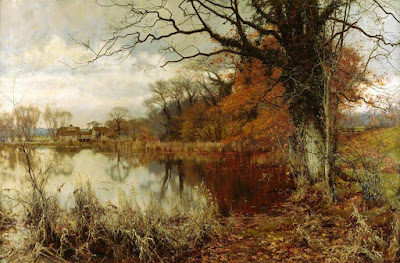 Edward Waite (1854-1924)
"The Mellow Year Is Hastening To Its Close" (1896)
These three haiku may give the impression that Bashō was a precursor of the English Romantic poets, meditating upon himself as he walked alone through the natural world.  "I wandered lonely as a cloud .  . ."  This would be a mistaken conclusion.  What it means to live and die as a human being, in the company of other human beings, is at the heart of Bashō's poetry.
Thus:
Deep autumn;
My neighbour, --
How does he live?
Bashō (translated by R. H. Blyth), Ibid, page 336.
Or this:
Turn this way;
I also am lonely,
This evening of autumn.
Bashō (translated by R. H. Blyth), in R. H. Blyth, Haiku, Volume 4: Autumn-Winter, page xxvii.
The poem is preceded by a prose introduction by Bashō:
"Unchiku, a monk living in Kyoto, had painted what appeared to be a self-portrait.  It was a picture of a monk with his face turned away.  Unchiku showed me the portrait and asked me for a verse to go with it.  Thereupon I wrote as follows --
You are over sixty years of age, and I am nearing fifty.  We are both in a world of dreams, and this portrait depicts a man in a dream, too.  Here I add the words of another such man talking in his sleep."
Bashō (translated by Makoto Ueda), in Makoto Ueda, Bashō and His Interpreters: Selected Hokku with Commentary (Stanford University Press 1991), page 298.
An additional passage from R. H. Blyth touches upon the essential human element in Bashō's haiku:
"He has an all-round delicacy of sympathy which makes us near to him, and him to us.  As with Dr. Johnson, there is something in him beyond literature, above art, akin to what Thoreau calls homeliness.  In itself, mere goodness is not very thrilling, but when it is added to sensitivity, a love of beauty, and poetry, it is the irresistible force which can move immovable things."
R. H. Blyth, A History of Haiku, Volume One: From the Beginnings up to Issa (Hokuseido Press 1963), page 110. 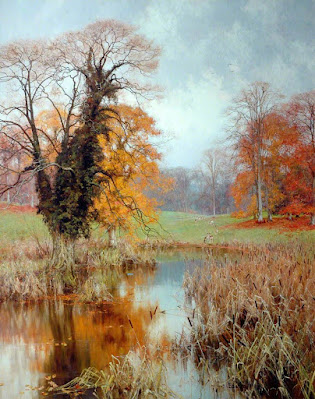 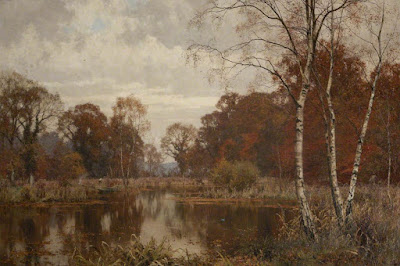 Edward Waite, "Fall of the Year"
Posted by Stephen Pentz at 12:45 AM

I never tire of your Basho posts or of Basho.

Nikki: Thank you very much. That's nice of you to say. It it always reassuring to know that he is there to return to: a place of beauty and of perspective. Thank you again.

These are three of my favorite of the paintings I've seen before in First Known -- perhaps together before. The middle one has always seemed familiar to me. On Halloween, which was a perfect October day here after a patch of dreary weather, I was walking through Central Park on my way home. I realized that the path I was crossing on is the very one which has a scene remarkably like that painting. A pond in the foreground, an open meadow on the other side of the path, with even the trees placed much as they are in the painting. One of my favorite trees in the park is there; I noticed that it has grown bigger & fuller in shape while I've been aware of it on my walks.
I love seeing it echoed in the painting in your blog.
Susan

Susan: You are correct: one or more of the three paintings by Edward Waite have been appearing here in October nearly every year since 2014. "Autumn Colouring," the painting you specifically discuss, made its first appearance here that year. I can't help returning to them: they capture the light and color of the season perfectly. It's wonderful that your view in Central Park is so similar to the scene in "Autumn Colouring." Well, you know how it goes: Life and Art, Art and Life.

As always, thank you very much for stopping by. I'm happy to hear you are enjoying some autumn walks. I hope that all is well.