I came across this a few days ago: "Even a man who is perfectly adjusted to a deranged society can prepare himself, if he so desires, to become adjusted to the Nature of Things."  It comes from Aldous Huxley's foreword to the first English translation of Hubert Benoit's The Supreme Doctrine: Psychological Studies in Zen Thought (Routledge & Kegan Paul 1955).  I encountered the sentence in "The Frontiers of Criticism," an essay by T. S. Eliot which was published in 1956, and later collected in his On Poetry and Poets (Faber and Faber 1957).  It should be noted that Eliot did not quote the final clause of Huxley's sentence: "as it manifests itself in the universe at large and in his own mind-body."
Given the current state of affairs in the world (the spectacle of madness we witness on a daily basis), the phrase "a deranged society" immediately caught my attention, as did Eliot's reference to The Supreme Doctrine as "that remarkable book."  (T. S. Eliot, On Poetry and Poets, page 116.)  I haven't read Benoit's book, but Huxley argues that Benoit "has offered a searching criticism of Western psychology and Western psychotherapy as they appear in the light of Zen." Based upon the summary provided in Huxley's foreword, and having now read some portions of The Supreme Doctrine that can be found on the internet, it would appear that Benoit feels that Western psychology and psychotherapy leave something crucial out of account.  This seems accurate.
But, in thinking further about the wonderful sentence from Huxley and the excerpts I have read from The Supreme Doctrine, it all seems too abstract to me.  Far too many words.  Still, Huxley's "a deranged society" is right on the mark, as is the idea that, if one is "perfectly adjusted" to that society, such an adjustment means absolutely nothing when deciding how to live one's life, how to preserve one's soul.
My no doubt simplistic view is that, when it comes to dealing with a deranged society, the solution is to step outside into the World.  I suppose this is the Wordsworthian pantheist in me.  Or perhaps I should say the Wordsworthian-Coleridgean pantheist (circa 1797 through 1799).
I have returned to  Coleridge's notebooks the past month, and happened upon this:
"On St Herbert's Island I saw a large Spider with most beautiful legs floating in the air on his Back by a single Thread which he was spinning out, and still as he spun, heaving in the air, as if the air beneath were a pavement elastic to his Strokes/ -- from the Top of a very high Tree he had spun his Line, at length reached the Bottom, tied his Thread round a piece of Grass, & re-ascended, to spin another/a net to hang as a fisherman's Sea net hangs in the Sun & Wind, to dry."
Samuel Taylor Coleridge, in Kathleen Coburn (editor), The Notebooks of Samuel Taylor Coleridge, Volume 1: 1794-1804 (Pantheon Books 1957), Notebook Entry 1598 (October 1803). 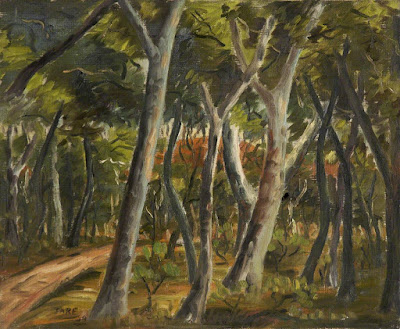 W. G. Poole, "Savernake Forest" (1938)
It all begins and ends with the beautiful particulars of the World. "The paradise of Flowers' & Butterflies' Spirits."  (Samuel Taylor Coleridge, Ibid, Notebook Entry 1736 (December 1803).)  And, as Coleridge reveals in his previous notebook entry, the paradise of spiders' Spirits as well.  He was not the first to notice.
The Spider
There is craft in this smallest insect,
with strands of web spinning out his thoughts;
in his tiny body finding rest,
and with the wind lightly turning.
Before the eaves he stakes out his broad earth;
for a moment on the hedge top lives through his life.
The ten thousand things should all be thus,
the way the Creator meant us to be.
Sugawara no Michizane (845-903) (translated by Burton Watson), in Burton Watson, Japanese Literature in Chinese, Volume 1: Poetry and Prose in Chinese by Japanese Writers of the Early Period (Columbia University Press 1975), page 107.
"For a moment on the hedge top lives through his life."  Lovely.  The beautiful particulars of the World are, like us, contingent and evanescent, but they are sufficient to keep us attentive and enthralled for a lifetime, if we choose.
No Jewel
No jewel from the rock
Is lovely as the dew,
Flashing with flamelike red
With sea-like blue.
No web the merchant weaves
Can rival hers --
The silk the spider spins
Across the furze.
Walter de la Mare, Bells and Grass: A Book of Rhymes (Faber and Faber 1941). 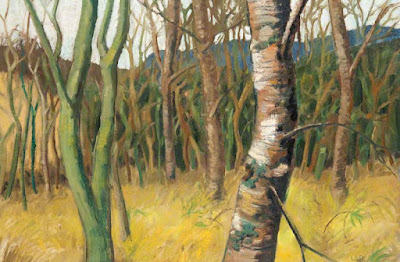 Leslie Duncan (b. 1932), "Birchwood"
I'm not certain about the notion of becoming "adjusted to the Nature of Things, as it manifests itself in the universe at large and in [one's] own mind-body."  It seems to me that attentiveness and gratitude are what is required, not "adjustment," although I may be quibbling with words.  In any case, paying attention and being grateful is a daily struggle (and, speaking for myself, a matter of daily failure).  Yet the World goes on being the World, and has always done so.  It patiently awaits us.
All the while, of course, the lower-case world goes on in its wonted way.  "Deranged society" follows upon "deranged society."  Human nature has never changed, and never will.  Best then to dwell with our companions the spiders.  And with the poets who pay attention to them.
On Something Observed
Torn remains of a cobweb,
one strand dangling down --
a stray petal fluttering by
has been tangled, caught in its skein,
all day to dance and turn,
never once resting --
elsewhere in my garden,
no breeze stirs.
Kokan Shiren (1278-1346) (translated by Burton Watson), in Burton Watson, Japanese Literature in Chinese, Volume 2: Poetry and Prose in Chinese by Japanese Writers of the Later Period (Columbia University Press 1976), page 27.
Yes, the World awaits us, but it is reticent.  We shouldn't expect it to spell things out for us.  And yet, messages do arrive.  Glimmers. "Quiet stream, with all its eddies, & the moonlight playing on them, quiet as if they were Ideas in the divine mind anterior to the Creation." (Samuel Taylor Coleridge, in Kathleen Coburn (editor), The Notebooks of Samuel Taylor Coleridge, Volume 1: 1794-1804, Notebook Entry 1154 (March - April 1802).)
spider -- what is it,
what is it you are crying?
autumn wind
Bashō (1644-1694) (translated by Makoto Ueda), in Makoto Ueda, Bashō and His Interpreters: Selected Hokku with Commentary (Stanford University Press 1991), page 54. 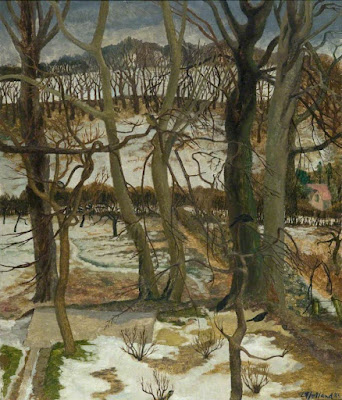 Dudley Holland (1915-1956), "Winter Morning" (1945)
All of this unfolds, as I suggested above, within a context of contingency and evanescence.  Coleridge captures this in another beautiful notebook entry: "September 1 -- the beards of Thistle & dandelions flying above the lonely mountains like life, & I saw them thro' the Trees skimming the lake like Swallows --"  (Samuel Taylor Coleridge, in Kathleen Coburn (editor), The Notebooks of Samuel Taylor Coleridge, Volume 1: 1794-1804, Notebook Entry 799 (September 1800).)  ". . . like life."  Wonderful.
Drops of dew
strung on filaments
of spider web --
such are the trappings
that deck out this world
Saigyō (1118-1190) (translated by Burton Watson), in Burton Watson, Saigyō: Poems of a Mountain Home (Columbia University Press 1991), page 200. 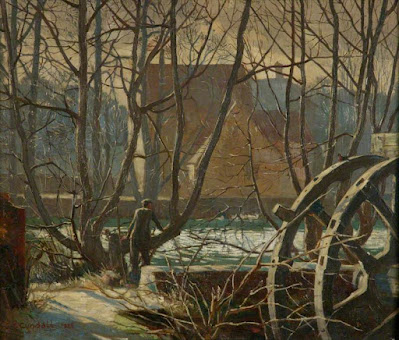 Thank you so much, I am still your faithful reader.

I think Nabokov would have liked Coleridge: attention to particular details and admiration for the complexity of insects.

Friko: Thank you very much for your thoughts. I'm pleased to know you are still visiting: I appreciate your presence here over the years. I hope that all is well. Take care.

St. Orberose: Alas, Nabokov is unexplored territory for me. But your mentioning of those two traits makes me think well of him. I agree with you that Coleridge certainly has both of them. I do recall that Nabokov loved, and studied seriously, butterflies. I like to think he would have appreciated Coleridge's entry about "The paradise of Flowers' & Butterflies' Spirits."

Thank you very much for sharing your thoughts, and for visiting. I hope you will return soon.