I confess that I cannot make head or tail out of Heraclitus.  The best that I can come up with is that his pronouncements -- "you cannot step into the same river twice," "the way up is the way down," etc. (these are paraphrases of the numerous translations out there) -- remind me of Lao Tzu's Tao Te Ching.  However, whatever the fragments mean, they certainly sound good.

Two of my favorite poets have written poems inspired by those fragments, and the poems provide me with a better clue as to what Heraclitus is up to than my own bumbling attempts to figure him out.  First, Derek Mahon:

Nobody steps into the same river twice.
The same river is never the same
Because that is the nature of water.
Similarly your changing metabolism
Means that you are no longer you.
The cells die, and the precise
Configuration of the heavenly bodies
When she told you she loved you
Will not come again in this lifetime.

You will tell me that you have executed
A monument more lasting than bronze;
But even bronze is perishable.
Your best poem, you know the one I mean,
The very language in which the poem
Was written, and the idea of language,
All these things will pass away in time.

In my next post, we will see what Louis MacNeice has to say about the ever-flowing world of Heraclitus. 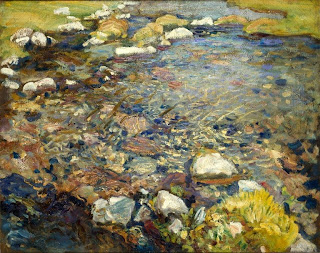