The Summer Of 1914: John Nash, Philip Larkin, And Edward Thomas 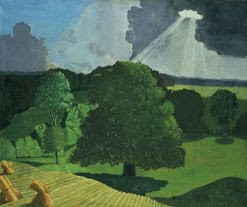 It is titled "A Gloucestershire Landscape."  Nash painted it in the summer of 1914.  The date put me in mind of Philip Larkin's poem "MCMXIV."  These are the concluding stanzas:

And the countryside not caring:
The place-names all hazed over
With flowering grasses, and fields
Shadowing Domesday lines
Under wheat's restless silence;
The differently-dressed servants
With tiny rooms in huge houses,
The dust behind limousines;


("The thousands of marriages/Lasting a little while longer":  these are two of the most beautiful and moving lines in Larkin's poetry, I think.  And how about "wheat's restless silence"?  Larkin is not usually thought of as a "nature poet," but it is hard to beat that.) 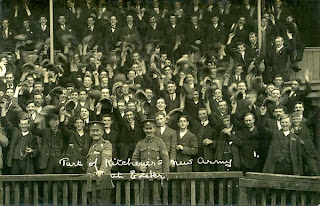 Recruits at Exeter, 1914
On June 24 of 1914, Edward Thomas made the following entry in one of his notebooks:
"Then we stopped at Adlestrop, through the willows could be heard a chain of blackbirds songs at 12.45 and one thrush and no man seen, only a hiss of engine letting off steam.
Stopping outside Campden by banks of long grass willowherb and meadowsweet, extraordinary silence between the two periods of travel -- looking out on grey dry stones between metals and the shining metals and over it all the elms willows and long grass -- one man clears his throat -- a greater than rustic silence.  No house in view.  Stop only for a minute till signal is up."
This entry, of course, marks the genesis of "Adlestrop," the final stanza of which brings us back to Nash's Gloucestershire:
And for that minute a blackbird sang
Close by, and round him, mistier,
Farther and farther, all the birds
Of Oxfordshire and Gloucestershire.
Posted by Stephen Pentz at 11:04 AM

Larkin brilliantly puts his finger on a corner of modern awareness. Poignant foreknowledge in contemplating any aspect of 1900-14 is virtually unavoidable today. Photographs of the time possess the most evocative power, because they confront you most starkly with the fact that it really did exist and all that's left of it is the photo.

An almost identical theatrical evocation of the mood of the poem is provided by a wonderful early Alan Bennett play, 'A Day Out'. I think it's on DVD.

I wonder whether this area of feeling is entirely healthy. Larkin keeps it under control but it can overbalance into a mawkish patronising if-only-they-knew hindsight. It's a bit of a contemporary cliche and it sometimes gets on my nerves.

It's not strictly relevant to your piece but Ivor Gurney, mentioned earlier in this blog, who was, in my opinion, just as good a composer as a poet, set to music one of Edward Thomas's greatest, 'Snow', and a selection of six others in the song cycle 'Lights Out' that includes a setting of that equally marvellous poem. Is it the only example of one poet setting another to music?

PAL: Thank you very much for your thoughtful comments. First, thank you for the recommendation of the Bennett play, which I was not aware of. I see from an Internet search that it was made into a short BBC television movie in 1972.

I agree with you that the doomed innocence theme can be a difficult one. It takes someone like Larkin to pull it off without, as you say, veering off into territory that is patronising or cliched.

Finally, thank you for the reference to Gurney's settings of Thomas's poems, which I also was not aware of. I knew that Helen Thomas had visited Gurney when he was in an asylum, but I wasn't aware of Gurney's compositions. I will try to track them down. As for poets setting the poetry of other poets to music, I am afraid that Gurney is the only poet-composer that I know of.

On the subject of Helen Thomas and Gurney, I just came across this in The Ivor Gurney Collection in the First World War Poetry Digital Archive: "From 1932 onwards he was visited regularly by Helen Thomas, wife of Edward Thomas. The two conversed about the love of the Gloucestershire countryside that Ivor and Edward shared, and Gurney's admiration of the latter's verse."

I find this fascinating; the poem is one of Larkin's best and you're right, the painting reflects it perfectly. I agree with PAL: the photographs do have an extraordinary evocative power.
Alan Bennett talks about this in a number of his works; about the power of photographs, but also about how the photographs can often hide the passion of the people within. Because many of the photographs are old and grainy, and almost always black and white, there is a lost connection with today's youth, we almost don't see them as real people.
He mentions it in the touching monologue 'Waiting For The Telegram', from the Talking Heads series.The character, played by Thora Hird, is a woman in a retirement home, looking back at a relationship she had with a soldier in WW1. She mentions the photographs and says "they were just like you," and "just as grand." It's definitely worth a watch if you've not seen it before.

midasinreverse: thank you very much for visiting, and for your thoughtful comments.

Although I have read some of Bennett's work, I was not aware of 'Waiting for the Telegram.' I will try to track it down.