"The River Of Rivers In Connecticut": Wallace Stevens

The following poem by Wallace Stevens is not explicitly about autumn.  However, something about the season -- the clear and slanting light, perhaps -- always brings it to mind.  The poem is, I think, one of Stevens's finest.  He wrote it late in his life -- a time when he tended to pare back a bit the preciousness and abstraction of his earlier work and to speak more directly.  (Something that he seemed to acknowledge in "First Warmth" ("I wonder, have I lived a skeleton's life . . .") and its successor, "As You Leave the Room.")

There is a great river this side of Stygia,
Before one comes to the first black cataracts
And trees that lack the intellligence of trees. 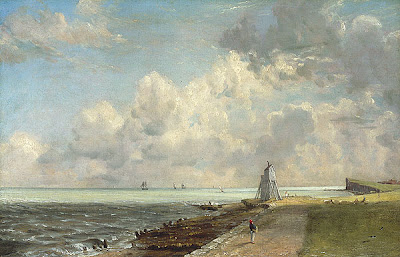 I agree, less precious, though, thankfully, we still hear his voice – despite its hint of enthusiasm!
Marvellous stuff, thanks for posting it.

Thank you for visiting and commenting again, pomposa.

I'm pleased that you like the poem. If forced to choose, I would pick it as my favorite Stevens poem -- it certainly is the one that pops into my head most frequently.

I agree: his voice is still there (even at the end) -- including, as you say, the "enthusiam" and the flourishes. Nobody is ever going to mistake him for Larkin!

What's with all this "Stygia" nonsense? Still overly precious for this literate cretin. Isn't one of the poets' essential task largely to communicate hidden truths and insights in accessible ways? Snatches of brilliance, overall too affected for me.

jay allain: thank you for visiting.

Perhaps you don't give people enough credit: I like to think that anybody who finds their way to Stevens's poetry will have some notion of Stygia, and, if they don't, the fact that they found their way to his poetry means that they will be curious enough to look it up. I wouldn't say that that makes his use of it "overly precious" or "too affected."

Under your view (to cite just one example), I suppose that we would have to find A. E. Housman's "Crossing alone the nighted ferry" "overly precious" or "too affected" because it requires a knowledge of Stygia, Lethe, and Charon. Again, I think that people are entitled to more credit than you give them.

In any event, it sounds as though Stevens is not your cup of tea. Thus, my advice is: stay away from him! There's no reason to suffer if you don't like his poetry. I'm sure there's plenty of other poets out there you'll find more enjoyable.