"Weaker And Weaker, The Sunlight Falls In The Afternoon": Wallace Stevens

Rilke's "Herbsttag" brings to mind an autumn-themed poem by Wallace Stevens that has a German title: "Lebensweisheitspielerei."  One annotator of Stevens's poems translates the compound-word used by Stevens as "worldly wisdom's game."  Another annotator translates it as "practical wisdom's amusement."  In any event, here is the poem.

Weaker and weaker, the sunlight falls
In the afternoon.  The proud and the strong
Have departed.

Those that are left are the unaccomplished,
The finally human,
Natives of a dwindled sphere.

Little by little, the poverty
Of autumnal space becomes
A look, a few words spoken.

Each person completely touches us
With what he is and as he is,
In the stale grandeur of annihilation.

As I suggested in my previous post on "The River of Rivers in Connecticut," I think that the poems that Stevens wrote late in his life (from, say, 1950 onwards, when he was in his seventies) are wonderful.  The verbal playfulness and rhetorical flourishes are still there, but they are toned down, and there is, I believe, an emotional element that is not often found in his earlier poetry. 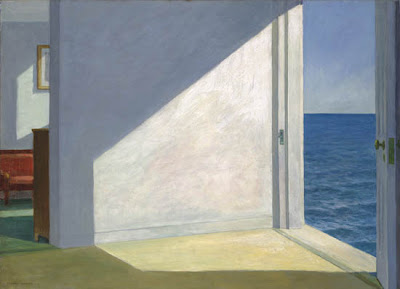 So beautiful.
As I'm sure you are aware, it's interesting to read this in conjunction with the Larkin poem “Friday Night at the Royal Station Hotel” that you posted some time ago. It's almost as if the two poets (arriving from very different directions) are writing about the same moment.

Thank you for the link to A. S. Byatt, zmkc. I had seen a reference on the Internet to her comment about Stevens and God, but I had not seen the video clip. Her comments on modern technology are very interesting as well. By the way, the poem that she quotes in the clip (as you probably already know) is 'Notes Toward a Supreme Fiction' (Part IV of the section titled 'It must be abstract').

With respect to Stevens and God, there is a contentious episode of Stevensian biography. The priest who visited Stevens in hospital during Stevens's final illness claimed that Stevens converted to Catholicism in his last days. This was vigorously denied by Stevens's daughter, Holly. Stevens's biographer (Joan Richardson) recounts the two claims, but does not take a position as to whether the conversion actually occurred. Instead, she suggests that perhaps 'as his final prank the comedian had led both Father Hanley and Holly to believe two different things.'

To my shame, I know absolutely nothing about Wallace Stevens. I think AS Byatt is tremendous on lots of things, but she seemed rather sweetly at sea about twitter and stuff. I like her engaged inquiring attitude to the world though. And I thought The Children's Book was really good.

Thank you for the follow-up comment, zmkc. I hope that you have enjoyed the poems by Stevens that I have posted. I confess that his poetry often leaves me baffled, but the beauty that he often (I think) achieves makes up for his difficulty.

Thank you for visiting and commenting again.