The Moon, that peeped as she came up,
Is clear on top, with all her light;
She rests her chin on Nailsworth Hill,
And, where she looks, the World is white.

White with her light -- or is it Frost,
Or is it Snow her eyes have seen;
Or is it Cherry blossom there,
Where no such trees have ever been? 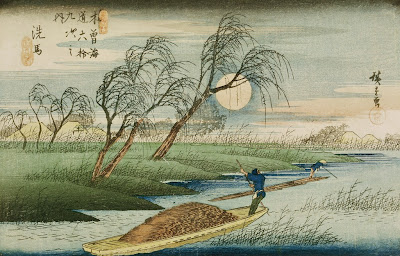 Over the past few months, when reading Chinese and Japanese poetry, I have been coming across images of frost and blossoms and snow and moonlight being confused.  From China, here is a poem by Li Po:

Li Po (translated by Burton Watson), The Columbia Book of Chinese Poetry: From Early Times to the Thirteenth Century (1984).

The following poem is by Po Chu-i: 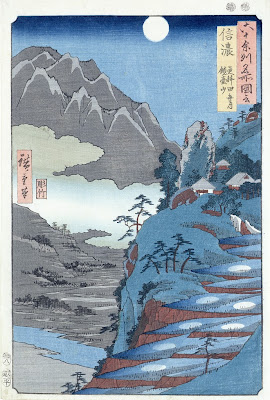 Opening the window at midnight, the night air cold,
Garden and roof a gleaming white,
I go to the verandah, stretch out my hand to scoop up some snow --
Didn't I know that moonlight won't make a ball?

And, finally, from Ryokan:

Fresh morning snow in front of the shrine.
The trees!  Are they white with peach blossoms
Or white with snow?
The children and I joyfully throw snowballs.

Ryokan (translated by John Stevens), One Robe, One Bowl: The Zen Poetry of Ryokan (1977). 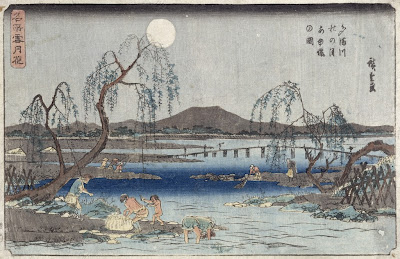 Utagawa Hiroshige
"Catching Fish by Moonlight on the Tama River"
Posted by Stephen Pentz at 12:25 AM

WH Davies as a Japanese poet - I love it! I suppose you could add a snippet of Little Gidding:

... Now the hedgerow
Is blanched for an hour with transitory blossom
Of snow, a bloom more sudden
Than that of summer, neither budding nor fading

What an amazing collection of snow/moon/frost/cherry blossoms!

To my mind, it's a stark reminder how I love British (actually Welsh here) and Chinese poetry, but Japanese poetry just leaves me cold. I have no excuse or defense, it's just the way it is for me. The British takes us on a voyage of sound, where we feel afterwards like we've had a good run in the countryside. The Chinese makes us feel we have to get ever-so-close to an elderly man as he tells the secrets of life that seem so very simple. As for the Japanese, I'll leave that to somebody else.

Thanks for keeping the words coming as the seasons change.

PS Thank you as well for your latest comment on the other post -- I agree with everything except your "vehemence."

Mr Russell: thank you very much for the Eliot -- I had completely forgotten about it. Another selection for the snow/blossom anthology!

I came upon these poems by chance, and I kept thinking of "Nailsworth Hill." It's nice to discover these connections on opposite sides of the world.

As always, thank you for visiting and for your thoughts.

Mr Sigler: I'm pleased that you like the selection. I understand your thoughts on Chinese versus Japanese poetry. Japanese poetry is perhaps more severe (I'm not sure that that is the correct word) than Chinese poetry, isn't it? However, I think that some Japanese poets (for example, Ryokan) do have a less severe feel. (In Ryokan's case, it may be because he wrote a great deal of kanshi, the Japanese version of Chinese poetry.) I lived in Japan for a year, have travelled there quite a bit, and have learned some Japanese (now mostly lost), so perhaps I am a bit partial.

As for the comments back and forth on the other post, I always felt that we were on the same page in terms of poetry's role in all of this.

I always appreciate receiving your thoughts. Thanks again.

This is fabulous. I love a blog which gets me thinking.

i dont know anything about japanese or chinese poems.But to me it is all very beautiful.Thank you for sharing

millefeuilles: thank you very much for visiting, and for your kind words. I'm pleased that you found your way here, and I hope you return.

Anita: thank you for stopping by again. I'm happy that you like the poems. They probably go well with Norway at this time of year.

it is not often one finds such a great blog on the web like yours..thank you for sharing so much great stuff :)

Thank you, Anita. There will be more snow poems to come, no doubt!