I have decided that R. S. Thomas's Christmas poetry deserves a second visit.  A side-note:  I find it interesting that most of his Christmas poems (at least the ones that I have been able to find) are in the two-stanza, eight-line form found in the following poems and in the three poems that appeared in my previous post.  It is probably merely a matter of coincidence, and may simply be a reflection of his laconic personality.

What is Christmas without
snow?  We need it
as bread of a cold
climate, ermine to trim

our sins with, a brief
sleeve for charity's
scarecrow to wear its heart
on, bold as a robin. 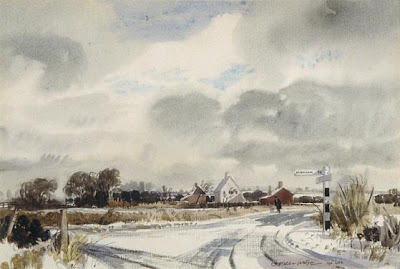 Erect capital's arch;
decorate it with the gilt edge
of the moon.  Pave the way to it
with cheques and with credit --

it is still not high enough
for the child to pass under
who comes to us this midnight
invisible as radiation. 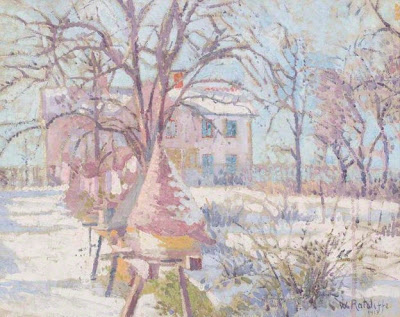 The moon is born
and a child is born,
lying among white clothes
as the moon among clouds.

They both shine, but
the light from the one
is abroad in the universe
as among broken glass. 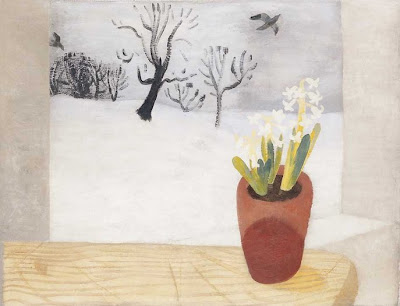 I hope you have a very good Christmas. My life has been more busy than usual and I haven't had the opportunity to read your blog as much as I would have liked in the past few months, but I think it is wonderful and am glad to know it is there. When/if things become less hectic in 2012, I look forward to catching up on the posts I've missed and to reading your new ones. Have a wonderful New Year.

Dear Mr Pentz, Just a brief but heart-felt Thank You for the thought and delight you bring via this website. I've been following for a few months now, and I always feel a little frisson of excitement when I see you've posted something new. I must admit too that I am enjoying the art you select almost as much as the poetry! With all good wishes for Christmas, and very much looking forward to joining you in 2012.

Thank you very much, zmkc. I appreciate your visits whenever they come. It sounds from your blog like you have been travelling quite a bit, so I thank you for finding the time to stop by when you can. Merry Christmas and Happy New Year.

Eamonn: thank you very much for your kind words. No matter how long I do this, I am still surprised, gratified, and flattered that, first, people find their way here, and, second, that they enjoy what they find here. As I have noted before, my sole purpose has always been to share my enthusiasms with others, and it is heartening to discover that others share those enthusiasms.
(Not for my sake, of course, but for the sake of the poetry and the art.)

As for liking the art as much (or more) than the poetry at times: it makes perfect sense to me, since I hope (if I am lucky) that they enhance each other.

Again, thank you very much. Best wishes to you for Christmas and in the New Year.

I'm pleased to hear that you like them, zmkc. Happy New Year!