"Like All Unheeded Beautiful Things That Pass Under The Leaves Of Life, Just Touching The Grass"

F. W. Harvey (1888-1957) and Ivor Gurney were friends.  They grew up together in Gloucestershire and shared a love of its countryside.  They both served in the Gloucestershire Regiment during the First World War. Gurney composed musical settings for a few of Harvey's poems.

The following poem by Harvey is, I think, a good companion piece to Gurney's "Quiet Talk" (which appeared in my previous post):  the wind is the subject of both, and both poems have a summer-into-autumn feel. 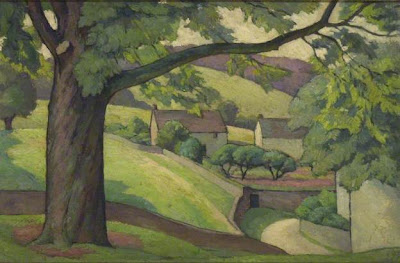 Wind that is in orchards
Playing with apple-trees
Soon will be leagues away
In the old rookeries.

Vaguely it arises,
Swiftly it hurries hence: --
Like sudden beauty
Blown over sense:

Like all unheeded
Beautiful things that pass
Under the leaves of life,
Just touching the grass.

Harvey's verse was, on the whole, fairly traditional and conventional. However, I sense a bit of influence from the more adventuresome Gurney in "Swift Beauty."  "Like sudden beauty/Blown over sense" has a Gurney feel to it, as does the final stanza. 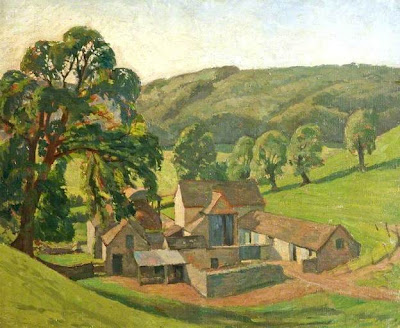 Hubert Lindsay Wellington, "Farm at Uley, Gloucestershire" (1932)
Posted by Stephen Pentz at 12:10 AM

Thank you for the introduction to this work. Had not been aware of either artist prior to this (and the paintings are of settings just up the road from where I am now!).

You never fail to surprise & delight SP. Thank you

Murgatroyd: it's good to hear from you again. I didn't realize that Harvey and Wellington were from your area. I envy you!

I believe Gurney's poem 'To His Love' was written when he thought his friend Harvey had been killed in the trenches. Later, Harvey came back from a German P.O.W. camp.

Anonymous: thank you very much for that interesting piece of information -- "To His Love" is a wonderful poem, and the fact that Gurney wrote it thinking of Harvey is very nice. I'm glad he was mistaken, but happy for the existence of the poem!

Thank you for visiting. I hope you will return.