The following poem by Philip Larkin beautifully evokes this summer-into-autumn time of year.  It is a risky poem.  For instance, the narrow-minded might say:  what business does a middle-aged man (a university librarian from Hull, mind you) have writing about the lives of young women?  And, what's more (they might say), Philip Larkin is a grumpy, old-fashioned, conservative misanthrope, isn't he?  This is what the misinformed -- who most likely haven't taken the time to actually read his poetry -- would have you believe.  They are wrong, of course. 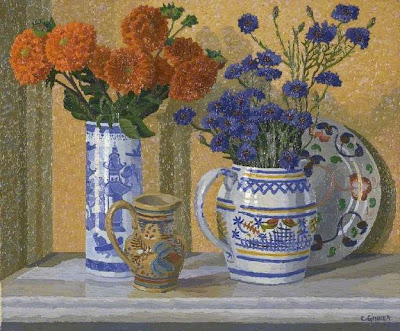 Summer is fading:
The leaves fall in ones and twos
From trees bordering
The new recreation ground.
In the hollows of afternoons
Young mothers assemble
At swing and sandpit
Setting free their children.

Behind them, at intervals,
Stand husbands in skilled trades,
An estateful of washing,
And the albums, lettered
Our Wedding, lying
Near the television:
Before them, the wind
Is ruining their courting-places

That are still courting-places
(But the lovers are all in school),
And their children, so intent on
Finding more unripe acorns,
Expect to be taken home.
Their beauty has thickened.
Something is pushing them
To the side of their own lives. 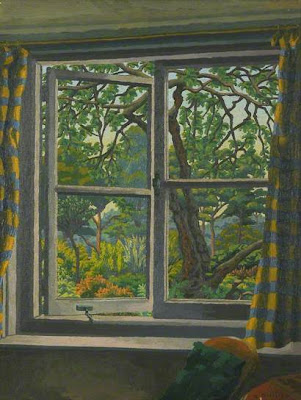 Charles Ginner
"Through a Cottage Window, Shipley, Sussex"
Posted by Stephen Pentz at 12:10 AM

To read 'between the lines' of Larkins' melancholy poem Afternoons, I think one needs to understand something about the ethos of life on what in Britain used to be called a 'council estate'.

A council estate is (or was) usually built by a municipality with the aim of providing affordable housing for relatively low-paid workers ('husbands in skilled trades'). As originally conceived by socialist politicians and dedicated philanthropists, slum dwellers were the first priority for such housing.

That was the general idea: things haven't worked out as planned. A long and tedious comment might perhaps explain why.

Alex: thank you very much for your thoughts. I hadn't thought about the relationship between the poem and council estates -- apart from assuming that that was where the poem was set, given the references to "an estateful of washing" and "the new recreation ground."

I suppose that I've focussed on "the hollows of afternoons" and the young mothers being "push[ed] to the side of their own lives." Another instance of Larkin's sensitivity, despite his dour reputation (undeserved, I think).

Your focus in this poem is, I think, more penetrating than mine. The images I find most evocative (of 'council estates' and their inhabitants) are in these lines:

Behind them, at intervals,
Stand husbands in skilled trades,
An estateful of washing,
And the albums, lettered
Our Wedding, lying
Near the television:

Husbands standing not with their wives but distanced at intervals, the estate full of washing, and the wedding albums near the television are insights that compress a great deal about what one might call 'respectable' or traditional working-class life in Britain.

(Of course that's all decayed now, but Larkin was writing in the 1960s just before things on council estates began to fall apart.)

Alex: I appreciate your follow-up comment. However, I definitely do NOT think that my focus is "more penetrating" than yours. Far from it!

As an American, I am in no position to, well, have a position on how council estates may have fit into Larkin's approach in the poem. Thus, your bringing the topic into the discussion adds depth to the poem that I would not have otherwise recognized.

Both of Larkin's editors date the poem as having been written in about September of 1959. I notice also that "The Whitsun Weddings" (the poem, not the book) was written in October of 1958. I seem to detect some of the same feelings in that poem as I do in "Afternoons" -- not only about human beings, but about English culture at that time. But, as an outsider, I am probably way off the mark.