"How Beautifully It Falls"

In my previous post, I blithely asserted, without citing any evidence, that autumn can be the stillest time of year.  One of the things that I had in mind was standing beneath a tree, on a windless day, and seeing a single leaf fall to the ground.

I have previously posted Charles Tomlinson's "Elemental" and "One Day of Autumn," which are lovely evocations of such an event.  As is Andrew Young's "The Leaf," which has also appeared here.  In the following poem, Kathleen Raine ponders the implications of such a leaf-fall. 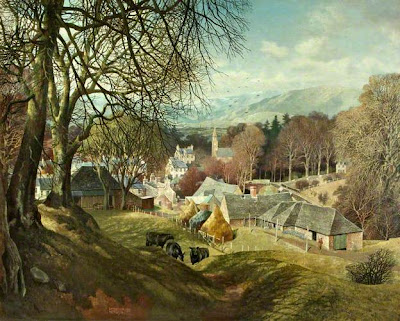 'How beautifully it falls,' you said,
As a leaf turned and twirled
On invisible wind upheld,
How airily to ground
Prolongs its flight.

What did that small leaf sign
To you, troth its gold
Plight 'twixt you and what unseen
Messenger to the heart
From a fair, simple land?

In considering the possible relationship between a single leaf and a single life, it may be helpful to know that Raine was a devotee of the poetry of William Blake.  Thus, Blake's "To see a World in a Grain of Sand" (from "Auguries of Innocence") may be at play in the background of the poem. 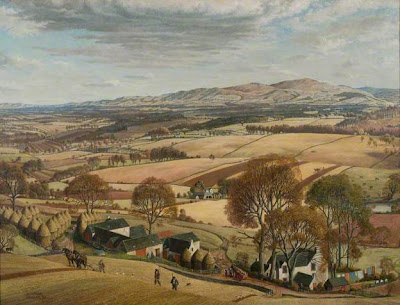 Thank you for making the connection between Kathleen Raine, one of my favorite poets, and Blake's "Auguries of Innocence" for this one, Mr. Pentz. I also see the element of how the individual getting absorbed in perception becomes absorbed as an individual life into something larger. It's as a character in the stunning new movie Cloud Atlas puts it "the ocean is nothing more than a multitude of drops."

And after the leaves have fallen, another kind of stillness comes upon the world, a gray silence, one unlike the golden and serene silence of high autumn. Wallace Stevens speaks of it in "The Plain Sense of Things":

After the leaves have fallen, we return
To a plain sense of things. It is as if
We had come to an end of the imagination,
Inanimate in an inert savoir.

It is difficult even to choose the adjective
For this blank cold, this sadness without cause.
The great structure has become a minor house.
No turban walks across the lessened floors.

The greenhouse never so badly needed paint.
The chimney is fifty years old and slants to one side.
A fantastic effort has failed, a repetition
In a repetitiousness of men and flies.

Yet the absence of the imagination had
Itself to be imagined. The great pond,
The plain sense of it, without reflections, leaves,
Mud, water like dirty glass, expressing silence

Of a sort, silence of a rat come out to see,
The great pond and its waste of the lilies, all this
Had to be imagined as an inevitable knowledge,
Required, as a necessity requires.

Mr. Sigler: thank you for those thoughts. I haven't read much of Raine's poetry, but I have been meaning to. As you know, she wrote a great deal on Blake, and I can see his influence in other poems of hers as well.

Mr. Floyd: thank you for Stevens's poem. It is one of my favorites, and I try to read it each autumn.

You have compiled some of the best leaf tinged poems here. It was lovely to read them.
Leaving a beautiful autumn poem you seem to have missed out.

Ms Prithviraj: Thank you very much for visiting, and for your kind words. And thank you as well for the poem by Cummings, which is lovely. I seem to recall reading it years ago, but I completely forgot about it. I appreciate your reminding me.

As you know from reading the blog, I am very fond of autumn and falling leaves. In connection with a single leaf falling, you might wish to look here as well: http://firstknownwhenlost.blogspot.com/2010/10/single-leaf.html, and: http://firstknownwhenlost.blogspot.com/2010/10/single-leaf-revisited-dorothy.html.

Again, thank you very much for visiting, and for sharing the poem.