At this time of year, I find it difficult to resist the dreamy, twilit, death-haunted pull of the Nineties poets.  No falling or fallen leaves are to be found in the following poem.  However, it was written on August 22, 1895. Thus, according to my definition of autumn, it qualifies as an autumn poem.

What's more, the poem contains a variation on the word "rustle."  Autumn is the season of rustling, wouldn't you say?  Sooner or later, everything rustles in autumn -- not just the leaves.  In this case, the rustling is done by the darkness, which makes perfect sense. 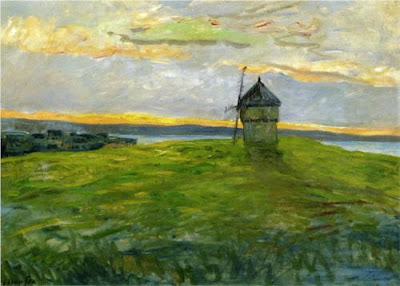 Arthur Symons, Amoris Victima (1897).  In a note to the poem, Symons states that it was written at Dieppe -- a favorite retreat of Decadent poets and artists.

Earlier in his career, Symons wrote a series of three poems that appeared under the heading "Colour Studies."  ("Twilight" itself is a fine "colour study," what with its "pale grey sea," "pale lilac," "dusky rose," and "twilit lavender.")  The following poem is the first of the three.  Symons dedicated it to the painter Walter Sickert.  It was written on September 16, 1893. 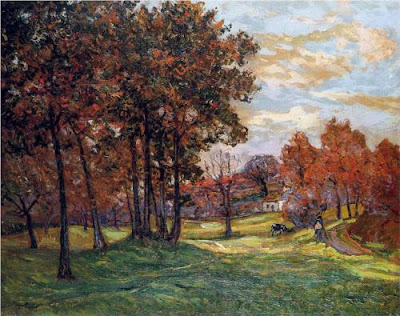 The grey-green stretch of sandy grass,
Indefinitely desolate;
A sea of lead, a sky of slate;
Already autumn in the air, alas!

One stark monotony of stone,
The long hotel, acutely white,
Against the after-sunset light
Withers grey-green, and takes the grass's tone.

Listless and endless it outlies,
And means, to you and me, no more
Than any pebble on the shore,
Or this indifferent moment as it dies. 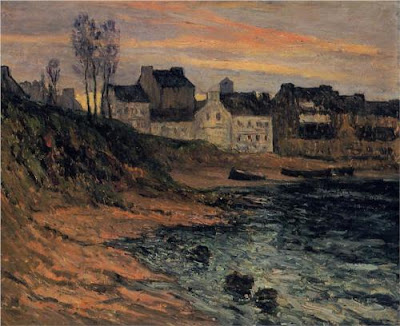 Ah the acuteness, the overwrought sensitivity, the ennui! -- such perfection in the verse -- how I wish the end of the 20th century had a comparable fin de siecle.

Mr. Sigler: yes, as I've noted before, I've got a soft spot in my heart for Symons, Dowson, et al. I know that they are not "major"/"great" (whatever those terms mean) poets, but I always return to them. What they did, they did very well. I wouldn't want us to lose them.

Thanks for visiting again. It's always good to hear from you.

Wonderful images Stephen! I've not heard of this artist before. Thank you.

Your recent posts remind me of that stunning Seamus Heaney poem you posted last September 'Postscript',. I recommended it to a friend who makes poetry calendars as Christmas gifts and it is now adorning the back of our loo door as the 'October' poem. See how far your posts travel Stephen!

Warmest greetings from a grey London.

Eamonn: it's good to hear from you again.

Yes, I think the Maufra paintings go well with the Symons poems: his colors have a sort of luridness (but muted luridness) that reminds me of some aspects of the poetry of the Decadents.

I'm pleased to hear that "Postscript" found its way into the calendar. It is gratifying to see people respond favorably to what I post: for the sake of the poetry, not me, that is. It is a fine poem -- your mentioning it reminds me to read it again. It is good for this time of year, isn't it?

As ever, thank you for your thoughts, and for visiting again.