Four-Line Poems, Part Five: "The Lovely In Life Is The Familiar"

I try my best to avoid the news of the world.  But this past week the word "Cyprus" has been insinuating itself into my consciousness.  It seems that something is happening there which ought to concern me.

I have never been to Cyprus.  I'm certain that it is a lovely land, and that the Cypriots are lovely people.  There it sits, a sun-bathed jewel in the blue Mediterranean, just offshore from the fabled lands that Herodotus wrote of long ago:  Phoenicia, Cilicia, Pamphylia, Lycia.

However, I confess that I cannot muster any concern for the liquidity of Cyprus.  For as long as I can remember (five-odd decades), I've been hearing that the world is on the verge of economic calamity.  But, as far as I can tell, economic history boils down to this:  "It's all fun and games until someone loses an eye."

I know next to nothing about how to live.  I cannot claim to have gained any wisdom during my time on Earth.  But I have a sense that life is not as complicated as we make it out to be. 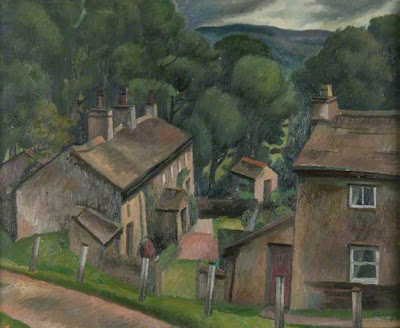 That shining moon -- watched by that one faint star:
Sure now am I, beyond the fear of change,
The lovely in life is the familiar,
And only the lovelier for continuing strange. 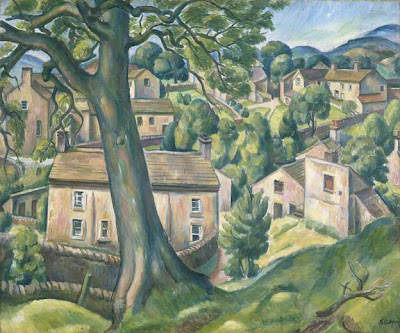 Of course, our appreciation of the lovely familiars in life may be enhanced if we bear certain things in mind.

The reference to the sound of "the surf at the harbour bar" in line 7 brings to mind two other poems that have death as their subject:  Tennyson's "Crossing the Bar" ("may there be no moaning of the bar") and Charles Kingsley's "The Three Fishers" ("though the harbour bar be moaning"). 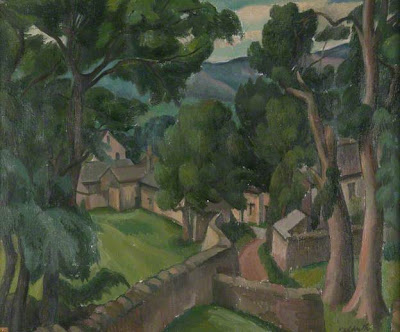 How delightful ,Mr Pentz to log on this morning and read the beautiful words of Walter de la Mare. The past few days have been rather miserable, made so by a combination of bitterly cold weather ( I realise of course that depends on what you are used to) and the fact that I have fallen victim to a particularly vile cold.
The last two lines of the first piece are especially good.
As to your comments regarding Cyprus,like you I try to avoid the news as often as possible, it is , so depressing and the noise and bluster of politicians, economists and other " experts" telling us how they are going to either change and solve everything when we all know they will neither change nor solve anything, but will almost certainly over complicate it!

Just want to thank you for this blog--I found it while looking up a poet of the First World War--Edmund Blunden, I think it was. That was a few weeks ago, and I've kept coming back. Your blog is really a mother-lode of poetry and art from a period that has been much overlooked and forgotten recently, and that it is hard to find anywhere else.

Much as I enjoy the poems and commentary, though, I must say that it gives me a sense of sadness, that ultimately rises to impatience. (A.E. Houseman does the same thing to me.) One can only take so much melancholy beauty and nostalgia, and then one must find answers. WHY is it that we humans have such capacity for beauty and love, and yet we can build Auschwitz, or drop the A-bomb on Hiroshima? Perhaps poetry can point us in the right direction...but only if it is a spur to a continuing quest for the truth hidden in the heart, not if it is a sort of drug to numb the mind and give pleasure to the senses....
I'm afraid that might sound critical of your blog--it's not meant to be. Rather, it's a haunting thought that comes back to me time and time again when reading many of the poets whose work you share here. A sense of sadness, and futility, and I feel it is not right! Or, at least, that it is not right to remain too long in that place... The heart rebels, and longs for a spice of gallantry, adventure, deep, belly-laughing humor, a quest! What is the purpose of life? There IS an answer, or why this deep need, this insatiable thirst to drink truth like cold water?
I wonder what your thoughts are... And once again, thanks very much for making this material available. It has opened up a whole new territory to myself, and, I am sure, to many of your readers.

Cyprus, turmoil in the Mid-East, the general mess of life, raucous voices, laments of imminent ruin--what is one to make of all this, the singular individual? I don't know, but Thomas Hardy offered a suggestion, a sound and objective one, one that, if we allow ourselves some bracing introspection, we might say, "Well, yes, Hardy, as he often does, is on to something, not a cure perhaps but a reasonable way at looking at the always vexing human predicament without resorting to apocalyptic hysteria, the same mellow and slightly melancholic, a sweet conciliatory acceptance of the quotidian and the simpler pleasures of life."

One can imagine some aged Roman poet sitting under a tree, calm and serene, even as the barbarians' camp fires flare lurid outside the walls of the city and History (with a capital H) hovers on the cusp--and yet some things endure:

"In Time of 'The Breaking of Nations'"

Only a man a harrowing clods
In a slow silent walk
With an old horse that stumbles ad nods
Half asleep as they stalk.

Only thin smoke without flame
From the heaps of couch-grass;
Yet this will go onward the same
Though Dynasties pass.

Yonder a maid and her wight
Come whispering by:
War's annals will cloud into night
Ere their story die.

Mr Ashton: thank you for stopping by again.

I owe the de la Mare to you: you mentioned him in one of your comments, and I decided that it had been too long since I had read his poetry. So I made a visit. "Night" has long been a favorite. I agree that the final two lines are very fine.

I also agree with you about politicians and experts: over-complication is always the end result. My advice (for what it is worth) to those who live in the EU is: "The bureaucrats have arrived to help you. Watch your wallet!" (Which applies to bureaucrats the world over, actually.)

As ever, I appreciate hearing from you.

Anonymous: thank you very much for visiting, and for your kind words about the blog, which I greatly appreciate.

With respect to your thoughts on poetry, I'm afraid that the space here is inadequate. I suppose that my first response is that I don't expect poetry to provide "answers" to the conundrums of human existence. Nor do I expect it to provide Truth with a capital T. It can, however, provide us with lower-case truths about what it means to be a human being, both in relation to the world outside and to our relationships with others.

Offhand, I cannot think of a poet, dead or alive, who provides "answers" or "Truth." And no poet is ever going to provide an "answer" to Auschwitz. Or prevent something horrific like Auschwitz from happening again. Why? Two words: human nature. Oh, and one more word: evil. No poet will ever change human nature or evil.

An aside: I do not wish to get into an argument, but I think that it is inappropriate to mention Hiroshima (or Nagasaki) and Auschwitz together. They are in no way related, and to mention the two together is a false equivalence.

I suggest that you read Paul Fussell's essay "Thank God for the Atom Bomb" for starters. You might also want to read about the history of the Pacific War, including the battles of Okinawa, Iwo Jima, Tarawa, Saipan, Guadalcanal, et cetera.

I say this as someone who has lived in Japan and who loves Japanese culture. It is always dangerous to pass judgment on historical decisions from the vantage point of the present. As I said, I do not wish to provoke an argument, but this happens to be a pet peeve of mine.

Again, thank you very much for visiting, and for your thoughts.

Anonymous: your description of how Hardy provides a way of looking at these things is perfect. In fact, I often turn to him for perspective, both on life in general, and on the follies of history (as we live it). You are correct: "In Time of 'The Breaking of Nations'" embodies his views probably better than any other poem of his. (I previously posted it here, on the 170th anniversary of his birth.)

Thank you very much for those thoughts, and for bringing Hardy into view.

I am largely ignorant about Cyprus, but I do recall one Cyprus poem that could be better known:

I HAVE seen old ships sail like swans asleep
Beyond the village which men still call Tyre,
With leaden age o'ercargoed, dipping deep
For Famagusta and the hidden sun
That rings black Cyprus with a lake of fire;
And all those ships were certainly so old—
Who knows how oft with squat and noisy gun,
Questing brown slaves or Syrian oranges,
The pirate Genoese
Hell-raked them till they rolled
Blood, water, fruit and corpses up the hold.
But now through friendly seas they softly run,
Painted the mid-sea blue or shore-sea green,
Still patterned with the vine and grapes in gold.

But I have seen,
Pointing her shapely shadows from the dawn
And image tumbled on a rose-swept bay,
A drowsy ship of some yet older day;
And, wonder's breath indrawn,
Thought I—who knows—who knows—but in that same
(Fished up beyond Aeaea, patched up new
—Stern painted brighter blue—)
That talkative, bald-headed seaman came
(Twelve patient comrades sweating at the oar)
From Troy's doom-crimson shore,
And with great lies about his wooden horse
Set the crew laughing, and forgot his course.

It was so old a ship—who knows, who knows?
—And yet so beautiful, I watched in vain
To see the mast burst open with a rose,
And the whole deck put on its leaves again.

Bob: thank you very much for stopping by again, and for the poem by Flecker. I agree that it, and the rest of his poetry, should be better known.

As you know, he wrote a number of poems with a Middle Eastern/Mediterranean backdrop. It is my understanding that, while working in the consular service, he was posted to Syria. As I'm sure you also know, he wrote a few other fine poems about ships as well. I'm fond of "A Ship, an Isle, a Sickle Moon," which feels like it could be set in Cyprus as well.