Four-Line Poems, Part Three: "The Wind In The Tree"

Tens of thousands of poems have been written about love:  found love, lost love, requited love, unrequited love -- love in all of its permutations and guises.  The lovers have aired their emotions in sonnets, canzoni, odes, and other traditional poetic forms, often going to great lengths to articulate that which may be ultimately inexpressible.

However, I respectfully suggest that it may be possible to capture love (momentarily and evanescently) in a four-line poem. 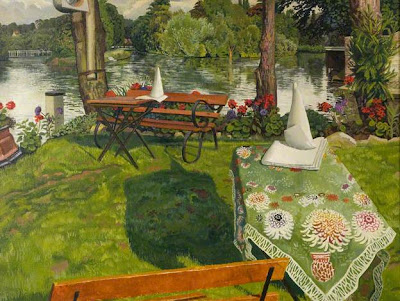 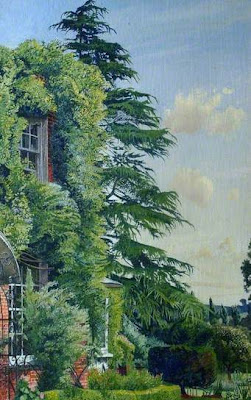 The following is my humble contribution to the genre of the four-line lost love poem.

The Land with Wind in the Leaves

Distance cannot remove me from that place.
I stand half a world away and here it is:
A green sway and roar -- blue, vast, open
And refusing always to let me depart.

And that's all I have to say about that. 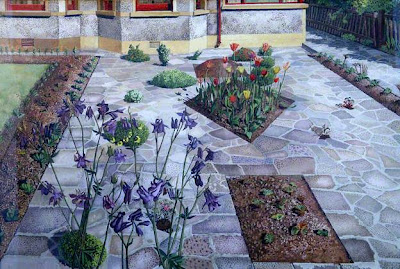 Stanley Spencer, "Garden at Whitehouse, Northern Ireland" (1952)
Posted by Stephen Pentz at 12:10 AM

Dickinson (in # 781, Johnson edition) on the paradox of love??? She presents the seeming contradiction in your requisite four lines.

It is a very fine little poem - both moving and suggestive. More of your own, please!

Mr Floyd: I'll have to ponder that one! Quite often her poems are beyond my grasp. Which is my fault. But it certainly sounds lovely.

Thank you very much for visiting again, and for sharing the poem, which I hadn't seen before.

Sam Vega: thank you very much for the kind words about the poem. I'm glad that you liked it. It was one of those rare occasions when the words and the feelings seemed to come out of the air unbidden.

What a beautiful blog! I have bookmarked it for my daily dose...now I am reading backwards through to the beginning...it is a feast for the soul...

Francesca: thank you very much for the kind words, which I greatly appreciate. I'm delighted that you found your way here, and I hope that you will return.