Do we live in a disenchanted World, a World without enchantment?  When I consider the current predominance of scientific "explanations"of human nature and of utopian political agendas, I tend to think "yes."  But science and politics are always optional for each of us, aren't they?  Who needs them? 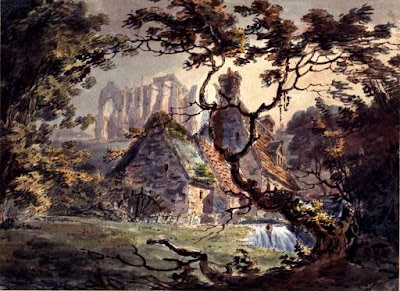 That we've broken their statues,
that we've driven them out of their temples,
doesn't mean at all that the gods are dead.
O land of Ionia, they're still in love with you,
their souls still keep your memory.
When an August dawn wakes over you,
your atmosphere is potent with their life,
and sometimes a young ethereal figure
indistinct, in rapid flight,
wings across your hills.

Cavafy has a knack for artfully merging the modern and ancient worlds, both in individual poems and in his poetry as a whole.  He does it in a very quiet fashion.  After reading a series of poems by him, you begin to notice that you have one foot in the present and the other foot in the distant past. You find yourself in a land where you have never walked, but one which is somehow familiar and comforting.  That land may be Ionia, or it may be Alexandria, real and imagined.

Some may think that writing poems about Hellenic gods in "modern" times is a species of "escapism."  I think not.  On the other hand, I believe that utopian political agendas and scientific "explanations" of human nature are perfect examples of escapism.  We mustn't forget:  unlike science and politics, Hellenic gods are humanly truthful. 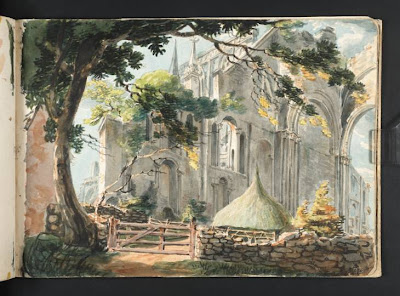 Because we have broken their statues,
Because we have turned them out of their temples,
They have not died, the gods, for that, at all.
O land of Ionia, you, they love you still,
And you they still remember in their souls.
When an August morning dawns over you
Through your atmosphere passes an ardour from their life;
And sometimes an aerial youthful form,
Indefinite, with swift transition,
Passes upon your hills. 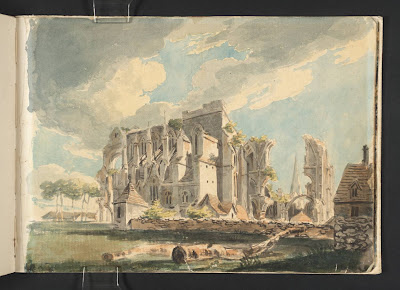 Because we smashed their statues all to pieces,
because we chased them from their temples --
this hardly means the gods have died.
O land of Ionia, they love you still,
it's you whom their souls remember still.
And as an August morning's light breaks over you
your atmosphere grows vivid with their living.
And occasionally an ethereal ephebe's form,
indeterminate, stepping swiftly,
makes its way along your crested hills. 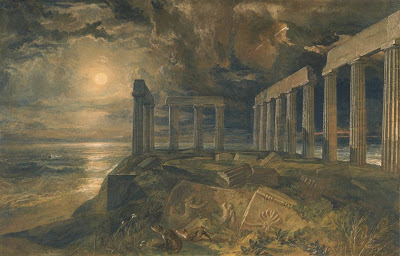 The Keeley-Sherrard translations are so much better than the others, aren't they? The "ephebe" in Mendelsohn, particularly, clanks terribly to my ear.

Mr. Ahuja: thank you very much for visiting, and for your thoughts. It is good to hear from you again.

Yes, the Keeley-Sherrard translations still seem to be the best, after all these years, don't they? As you know, within the past 5 to 10 years, there have been quite a few new translations of Cavafy, but none of them match theirs (in my humble opinion).

Of course, I blithely say this without the benefit of knowing Greek! However, in comparing translations (not just of this poem, but of others), something often seems slightly off at some point in the versions of other translators. I seldom, if ever, feel that way with respect to the Keeley-Sherrard versions.

Your pointing out the use of "ephebe" is a good example: it struck me as well when I first read the translation. I say this knowing that, in discussing the poem in his Cavafy's Alexandria (a fine book), Keeley refers to the youthful figure in the poem as an "ephebe." However, he elected not to use the word in his translation. I think this says something about the tone and flow that Keeley and Sherrard were able to achieve.

The success of the Keeley-Sherrard translations may have something to do with Keeley spending a great deal of time in Greece throughout his life. You are probably aware of it, but, if not, I recommend his Inventing Paradise: The Greek Journey, 1937-1947 (1999).

Melville holds out hope for you:

"If hereafter any highly cultured, poetical nation shall lure back to their birth-right, the merry May-day gods of old; and livingly enthrone them again in the now egotistical sky; in the now unhaunted hill; then be sure, exalted to Jove’s high seat, the great Sperm Whale shall lord it."

I think "the now egotistical sky" and "the now unhaunted hill" are little masterpieces.

Bob: thank you very much -- wonderful! Melville does indeed give me hope. Now, to find a "highly cultured, poetical nation" . . .

I agree with you completely about "the now egotistical sky" and "the now unhaunted hill": they are indeed "little masterpieces," aren't they? (And "the merry May-day gods of old" is marvelous as well.) You have made me want to dive back into Moby-Dick: there is so much that I have forgotten, especially things like this -- they seem to come out of nowhere, and leave you shaking your head in amazement.

For re-readers (and first-timers), I recommend without reservation the unabridged audio version read by Frank Muller. His crisp and quick style captures Ishmael the raconteur, as well as the self-conscious humor that runs through many passages. Here's one Muller chapter that someone has put online, "The Fossil Whale":

This is one of the chapters that people who don't "get" Moby Dick always pass over. But it's full of magnificent style and detail. The opening sections are self-parody: "hugeness" is a central theme of the whole book, and here Ishmael is making fun of himself, saying he needs a giant dictionary, and a big pen, and of course has to use lots of big words, since there's nothing bigger than the whale. Then he turns to the whole sweep of time and the universe, with the whale, as before, lording over all.

"Here Saturn's gray chaos rolls over me" is one of the "little masterpieces" of this chapter, flashing past before you even realize it.

I wouldn't want to defend Mendelsohn's translation, and agree that the Keeley-Sherrard version is superior, but it shouldn't be thought that his choice of 'ephebe' is simply capricious or unmotivated. The original reads: kai kάpot’ aitherίa efivikί morfί (και κάποτ’ αιθερία εφηβική μορφή) and in the non-English translations of Cavafy I have to hand, this is rendered, apparently unproblematically, by the respective loanword noun corresponding to 'efivikós' (all with very Hellenic associations): 'y a veces una etérea figura de efebo' (Spanish); 'e un'eteria parvenza d'efebo' (Italian); 'o formă diafană de efeb' (Rumanian), which isn't to say this will work as easily in English, but simply that in these translations the cultural specificity of 'efivikós' ('adolescent', most probably alluding to Hermes) has prevailed. Perhaps the modest gains in 'ephebe' are offset by severer losses, but the gains in Keeley-Sherrard's 'young ethereal figure' (Mavrogordato's 'aerial youthful form' is admittedly a non-starter) aren't so striking as to rule out 'ephebe' entirely. Spare a thought for the poor translator, always caught between a rock and a hard place.

Bob: thank you for the follow-up comment, and for the information about Frank Muller's reading of Moby-Dick. I see by looking it up on Amazon that it consists of 18 CD discs! That's quite an achievement in itself.

I agree with you: my favorite parts of the book are the chapters (and passages within chapters) that consist of apostrophes by Melville on various topics -- where he just lets himself go (with purpose, of course). When he does this, he reminds me of Ruskin, who continually surprises and delights by going off on what seem to be tangents, but are really not.

Mr. Thomson: thank you very much for visiting again, and for your thoughts.

As I indicated in my response to Mr. Ahuja's comment, I have presumed since reading Keeley's comment about "Ionic" in his Cavafy's Alexandria that "ephebe" appears in the original, but that Keeley and Sherrard had decided not to use it for poetic/aesthetic reasons. So I likewise presumed that Mendelsohn's version is truer to the actual text.

I agree with you that translators are between a rock and a hard place. I know nothing of Greek. But to use two examples from Japanese, a language that I know enough about to be dangerous. If a haiku has the word "sakura" in it, should a translator into English use "sakura" instead of "cherry tree" or "cherry blossom" on the assumption that a fair number of non-Japanese speakers know what "sakura" means? What about the word "sushi"? Should the translator use "sushi" or "raw seafood"? I would probably say "no" in the first example and "yes" in the second example. But that's just me.

I am, in general, no fan of the poetry of Ezra Pound. As I'm sure you know, his translations of Chinese poetry in "Cathay" contain a number of howlers. However, if someone were to ask me where to start in trying to get a feel for Chinese poetry via translation into English, I would tell them to begin with Pound (and Arthur Waley and Burton Watson). I have seen any number of "accurate" translations by someone who is a native speaker and/or who has a doctorate in Chinese language and/or Chinese literature that are devoid of beauty and emotion.

So, I am not being critical of Mendelsohn's translation of "Ionic", or of his translation of Cavafy's poetry as a whole. In fact, of all the recent translations of Cavafy, I like his the best. And his notes and commentary on the poems are invaluable.

Being ignorant of Greek, I should probably just keep my mouth shut! But I do think that "ephebe" (although textually accurate) jars.

As always, it is very nice to hear from you. Thanks again.