"The Trees Around Are For You, The Whole Of The Wideness Of Night Is For You"

Mary Coleridge's "In Dispraise of the Moon," which appeared in my previous post, describes the moon as follows:

She wakes her dim, uncoloured, voiceless hosts,
Ghost of the Sun, herself the sun of ghosts.

The second line put me in mind of one of my favorite poems by Wallace Stevens, a poem which, incidentally, is set in August ("the most peaceful month").  In it, Stevens takes a more charitable view of the moon and its ghosts. 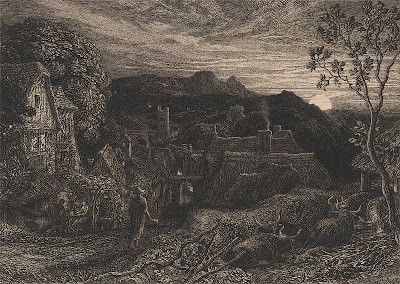 A Rabbit as King of the Ghosts

The difficulty to think at the end of day,
When the shapeless shadow covers the sun
And nothing is left except light on your fur --

There was the cat slopping its milk all day,
Fat cat, red tongue, green mind, white milk
And August the most peaceful month.

To be, in the grass, in the peacefullest time,
Without that monument of cat,
The cat forgotten in the moon;

And to feel that the light is a rabbit-light,
In which everything is meant for you
And nothing need be explained;

Then there is nothing to think of.  It comes of itself;
And east rushes west and west rushes down,
No matter.  The grass is full

And full of yourself.  The trees around are for you,
The whole of the wideness of night is for you,
A self that touches all edges,

You become a self that fills the four corners of night.
The red cat hides away in the fur-light
And there you are humped high, humped up,

I have previously ventured a guess as to what the poem may be "about" or what it "means."  On the one hand, it is perhaps Stevens's sublimest, most moving articulation of his belief that what makes us human is our imagination (living in -- and transforming -- a real world of moons and rabbits and cats).  On the other hand, it may simply be a tale about a rabbit that was digging up and eating the bulbs in Stevens's flower garden.  Either version is fine by me. 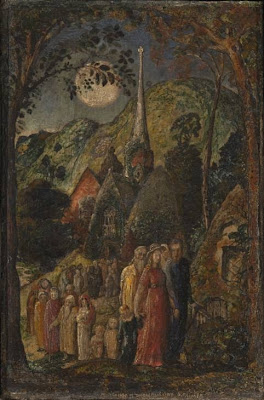 There are great things doing
In the world,
Little rabbit.
There is a damsel,
Sweeter than the sound of the willow,
Dearer than shallow water
Flowing over pebbles.
Of a Sunday,
She wears a long coat,
With twelve buttons on it.
Tell that to your mother.

For those interested in another view of rabbits, I recommend "The Rabbit's Advice" by Elizabeth Jennings, which I have posted previously. 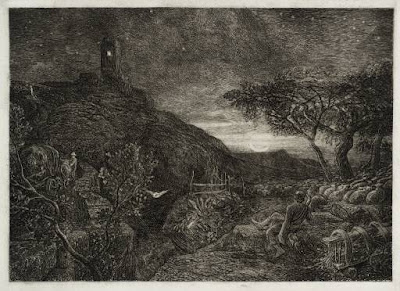 Mr Pentz, what a delightful post. A favourite Stevens' poem of mine and Samuel Palmer too. One of the most special of English artists.
I've never known what the poem " means " either, do we need to? It works so wonderfully well I'm not sure it matters.

"The trees around are for you,
The whole of the wideness of night is for you,
A self that touches all edge"

Such wonderful lines and occasionally, if we are fortunate we may experience something like that feeling too, even if very briefly, in solitary moments.

The English poet William Cowper kept three hares as pets (Is he unique in this?). He exercised them on a parlor carpet of Turkey red. When one of the hares died, Tiney his name, a surly hare according to Cowper (". . . still a wild jack-hare"), Cowper wrote an epitaph for him.

It may be that Cowper's little poem takes a serious tone in the last two stanzas when he imagines one of his other hares, Puss, older than Tiney and much more congenital, a sharer of Tiney's box in life, feeling the cold breath of inevitable death breathing on his fur.

Would it be fair to say the poem is only tangentially about the death of a hare and more about the human predicament? It's probably making too much of simple poem.

Old Tiney, surliest of his kind,
Who, nursed with tender care,
And to domestic bounds confined,
Was still a wild jack-hare.

Though duly from my hand he took
His pittance every night,
He did it with a jealous look,
And, when he could, would bite.

His diet was of wheaten bread,
And milk, and oats, and straw,
Thistles, or lettuces instead,
With sand to scour his maw.

On twigs of hawthorn he regaled,
On pippins’ russet peel;
And, when his juicy salads failed,
Sliced carrot pleased him well.

A Turkey carpet was his lawn,
Whereon he loved to bound,
To skip and gambol like a fawn,
And swing his rump around.

His frisking was at evening hours,
For then he lost his fear;
But most before approaching showers,
Or when a storm drew near.

Eight years and five round-rolling moons
He thus saw steal away,
Dozing out his idle noons,
And every night at play.

I kept him for his humour’s sake,
For he would oft beguile
My heart of thoughts that made it ache,
And force me to a smile.

But now, beneath this walnut-shade
He finds his long, last home,
And waits in snug concealment laid,
Till gentler Puss shall come.

He, still more agéd, feels the shocks
From which no care can save,
And, partner once of Tiney’s box,
Must soon partake his grave.

Mr Ashton: I agree with you completely about the poem. Starting with the wonderful title (I'm biased, but I think that no one has ever titled poems better than Stevens), the poem is beautiful, no matter what it means. To attempt to pick the language apart and parse it would destroy the poem. Better to leave it alone.

Yes, I think that we all have experienced what he describes, if only momentarily. As Stevens remarks in other poems (e.g., "This Solitude of Cataracts"), such momentary realizations are the best we can hope for: we can never freeze things in place.

I always look forward to hearing from you. Thank you for visiting again.

Anonymous: thank you very much for taking the time to share Cowper's poem. It fits well.

I've long been fond of Cowper and his rabbits. They provided a great deal of comfort to a troubled soul, didn't they? His references to them in his letters and in his short article that was published in The Gentleman's Magazine (which I'm sure you're aware of), as well as the poem, show how much they meant to him. The third to last stanza of the poem captures his feelings well.

I agree that the poem may be about Tiney, as well as something else, given Cowper's cast of mind.

Thanks all for this discussion! It led me to learn more about Cowper and his hares (much of it from a body known as the House Rabbit Society). I am greatly heartened by the knowledge that Cowper published no poems until he was 54, and that these poems may have been written in response to a challenge to write something beautiful about a sofa.

So happy to have found your blog tonight, while poking around looking at the younger Spencer's works.
I love the Stephens poem just as much as I love the way a poem can make you feel wholly and suddenly understood. Thank you.

Mr Miller: yes, who would have thought that Cowper and his hares would enjoy such a long life! "The House Rabbit Society": I'd never heard the term "house rabbit" before. Ah, the wonders of the Internet.

I recommend that you track down an image of the stained glass window in St Nicholas Church in Dereham, Norfolk (where Cowper is buried): it depicts him reading to his hares and his beloved spaniel. (I would provide a link, but I haven't figured out how to do it!)

Likewise, who knew that a poem about a sofa could take on such large dimensions? It sounds like a promising Monty Python skit. (Who knows, maybe it was, and I missed it.)

I'm happy to hear from you again. As always, thank you for visiting.

Jessica: thank you very much for visiting, and for your thoughts. I'm pleased that you found your way here, and I hope you'll return. Thanks again.