Before I return to dust I intend to read all 947 of Thomas Hardy's poems. (James Gibson has numbered them for us in his 1976 edition of Hardy's Complete Poems.)  Mind you, I say this with a sense of excitement and anticipation, not with a sense of obligation.

I suspect that many of those who love Hardy's poetry feel as I do:  no matter how long you have been reading him, there is always the expectation that, upon turning the page, a new discovery awaits you.  Part of me wishes that I will never reach the end:  I like the fact that uncharted territory lies before me. 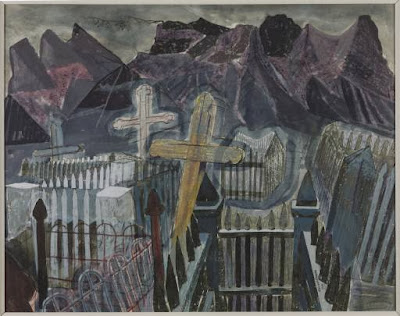 Thus, for instance, I recently came across the following poem for the first time.  It turns out that one line of it fits well with the astronomical theme of my previous post.  And a lovely line it is.

I do not see the hills around,
Nor mark the tints the copses wear;
I do not note the grassy ground
And constellated daisies there.

I hear not the contralto note
Of cuckoos hid on either hand,
The whirr that shakes the nighthawk's throat
When eve's brown awning hoods the land.

Some say each songster, tree, and mead --
All eloquent of love divine --
Receives their constant careful heed:
Such keen appraisement is not mine.

The tones around me that I hear,
The aspects, meanings, shapes I see,
Are those far back ones missed when near,
And now perceived too late by me!

Many people know Hardy's poetry only through the anthology pieces:  e.g., "During Wind and Rain," "The Darkling Thrush," "The Convergence of the Twain," "Channel Firing," "The Oxen," et cetera.  But Hardy's depth, expansiveness, and charm only become apparent if one immerses oneself in the hundreds of poems that fill in the interstices of his universe -- and it is indeed an entire universe.

Like those hundreds of other poems, "The Rambler" states a truth about life; a small truth, perhaps, but one we all have felt.  (Which is not to say that it is meant to instruct or to edify.  Hardy was above all an intent and penetrating onlooker, not a moral instructor.)  In addition (for one reader, at least), it contains a beautiful image that, once seen, can never be forgotten: "constellated daisies."  In Hardy's poetry, there is no end of these small, beautiful, and humanly truthful revelations. 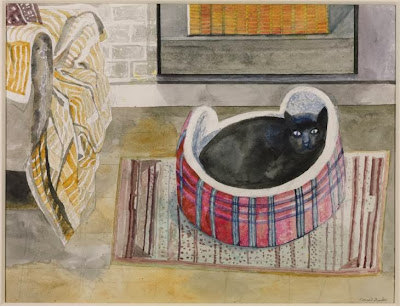 "Constellated daisies" brings to mind a poem by Andrew Young that has appeared here before, but is worth revisiting (even if it is not the daisy time of year).  Heavenly bodies again make an appearance.

The stars are everywhere to-night,
Above, beneath me and around;
They fill the sky with powdery light
And glimmer from the night-strewn ground;
For where the folded daisies are
In every one I see a star.

And so I know that when I pass
Where no sun's shadow counts the hours
And where the sky was there is grass
And where the stars were there are flowers,
Through the long night in which I lie
Stars will be shining in my sky. 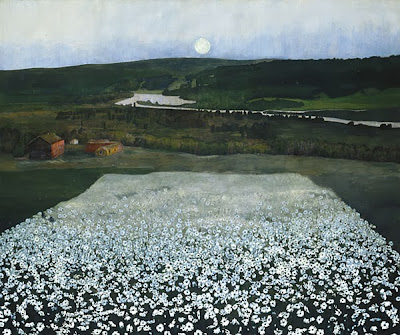 The tones around me that I hear,
The aspects, meanings, shapes I see,
Are those far back ones missed when near,
And now perceived too late by me.

Are you going to post on each of Hardy's poems?

Maybe I'll read along with you for I have The Wordsworth Poetry Library edition of "The Works of Thomas Hardy" which has a large number of his poems.

Fred: I hadn't thought about "first known when lost" in connection with that stanza, but you're right.

As for posting on each of Hardy's poems: I think that I will run out of years before that occurs! I'm not that fast. As a result of your comment, I checked my archives and discovered that Hardy has been mentioned in about 70 posts in the 3 1/2 years that I've been doing this. Thus, I'm not likely to reach 947 poems by the time I leave this world, I'm afraid!

As always, it's nice to hear from you. Merry Christmas and Happy New Year!

Poor Hardy was always lamenting that he didn't appreciate what he had or had seen, until it was too late (Emma being a case in point!) I always felt that he was trying to relive his childhood landscape in his writing too, both prose and poetry. Alas and alack should have been his middle names!

This is yet ANOTHER Hardy poem I have overlooked, and I have absolutely no excuse as my Wordsworth Poetry Library edition of The Works of Thomas Hardy is permanently on my desk, and I dip in regularly.

"Constellated daisies" - how beautiful a description that is. To me, "When eve's brown awning hoods the land" is just as evocative, but overlooked by me on the first reading. And of course, the alas and alack turn up in the final lines . . .

I must read more Andrew Young - he is delightful - and I am envious of your encyclopaedic knowledge which allows you to know which poems sit well in juxtaposition.

Merry Christmas and a Happy New Year, from a wintry Welsh morning with a sky the colour of a dove's wing and with a Christmas Robin in the garden.

Bovey Belle: yes, Hardy was always visiting the past (or, perhaps more accurately, living in it), wasn't he? I agree with you that Emma is the prime case in point in terms of his regrets over what he missed in the past. I also agree with you about him wanting to relive his childhood: I seem to recall you and I talking about "Childhood Among the Ferns," which is but one example.

I'm pleased that you liked the poem by Andrew Young. I do think that you would like his poetry, although it perhaps does not have the strong human element that Hardy's does. And thank you for the kind words about my (purported) "encyclopedic knowledge": but, as I mentioned in a recent post, I've only read about 1% of the poetry that I wish I had read! And remembering related poems is simply a matter of luck, and being blessed with a good memory (which is rapidly fading at my age!).

As ever, thank you very much for your thoughts. Merry Christmas and Happy New Year!