I am ignorant of the seasonal progress of the moon and the other heavenly bodies across the night sky.  I really ought to make a study of these things, especially since time is running out on ventures of this sort.  But I prefer to remain in the dark (so to speak), and to be pleasantly surprised by what happens overhead.  Ignorant, yes, but surprised.

This week, for instance, I saw something wonderful in the southwest quarter of the evening sky.  The day had been cold and clear.  The sun had just set beyond the Olympic Mountains into the unseen Pacific.  A waxing crescent moon had risen.  Below it, at about a 45-degree angle to the left, was a brilliant point of light.  At first I thought the point of light was an airplane above the horizon.  But it didn't move.  Was it a planet or a star?  I had no idea.

The two of them together -- the crescent of white and the point of white -- were beautiful and remote and noble and cold.  Of course, that's just a human perspective -- an unnecessary commentary.  I later discovered (the Wonders of the Internet) that the brilliant point of light was Venus.  Not that it matters, mind you.  A star would have sufficed. 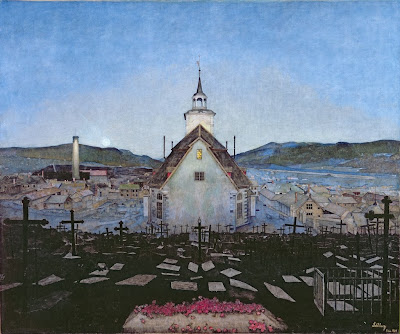 Yesterday, I came across the following haiku.  It somehow seems to relate to what I saw in the evening sky, although I'm not sure why.

The previous owner:
I know it all, --
Down to the very cold he felt.

The haiku appears at the end of the following prose passage:

"Yearning for a shelter where I could enjoy a fleeting dream, I rented a house at the foot of Ueno Hill even though it was as tiny as a snail's shell. The previous resident, perhaps to relieve the boredom of life, had planted a morning glory and had it climb up the fence.  The flower was now dead, and only its seeds lay scattered on the ground.  The scene looked more forlorn now than in autumn; the seeds, it seemed to me, were like someone's tears.  Near the entrance to the house was a tiny patch of cultivated land where some vegetable appears to have been sown.  Soft green sprouts were emerging out of the ground, though snow still remained nearby.  Were they to be used for rice cake on the auspicious New Year's morning?

Pasted on the wall were good luck banners to keep thieves away from the house.  Hanging above the cooking stove was a sacred rope shaped like a daikon radish, believed to protect the house from fire.  A pine branch offered to the kitchen god still kept the living color of green, though it had fallen sideways on the altar.  All those things suggested the previous resident had planned to live here forever.  Yet he was now gone without a trace, as if he had vanished in the clouds or in the mountains.  Could there be such a thing as a permanent home anywhere on this earth?  After a little while, someone else will be saying what I am saying now." 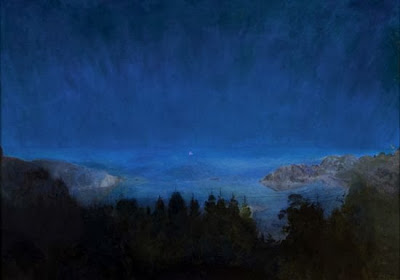 And this seems to follow naturally, although, again, I'm not sure why.

All out-of-doors looked darkly in at him
Through the thin frost, almost in separate stars,
That gathers on the pane in empty rooms.
What kept his eyes from giving back the gaze
Was the lamp tilted near them in his hand.
What kept him from remembering what it was
That brought him to that creaking room was age.
He stood with barrels round him -- at a loss.
And having scared the cellar under him
In clomping here, he scared it once again
In clomping off; -- and scared the outer night,
Which has its sounds, familiar, like the roar
Of trees and crack of branches, common things,
But nothing so like beating on a box.
A light he was to no one but himself
Where now he sat, concerned with he knew what,
A quiet light, and then not even that.
He consigned to the moon, such as she was,
So late-arising, to the broken moon
As better than the sun in any case
For such a charge, his snow upon the roof,
His icicles along the wall to keep;
And slept.  The log that shifted with a jolt
Once in the stove, disturbed him and he shifted,
And eased his heavy breathing, but still slept.
One aged man -- one man -- can't keep a house,
A farm, a countryside, or if he can,
It's thus he does it of a winter night.

Among many marvelous things, this always catches me:  "concerned with he knew what." 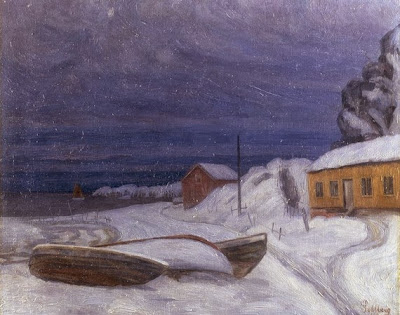 Mr Pentz - thank you for sharing such beautiful word-paintings, and for making my mind flow with imagination once again.

I was amazed that Kobayashi Issa lived and wrote so long ago. That seems such a modern piece of writing somehow, and so incredibly observant. One almost mourns the lost opportunity to visit the house as tiny as a snail shell . . .

As for the Robert Frost poem - whilst I didn't know it was written by him until the end, the writing style seemed like an old friend. You are quite right - that little refrain is which captured my attention too - it is such an expression of the inner man and his self-containment. "through the thin frost" made me shiver more than mention of a heavy frost would!

I agree that Issa's haiku sounds modern. I think you'll find that this is true of many haiku written by the three commonly-recognized great masters: Basho, Buson, and Issa. Taking into account the inevitable loss in translation, I think that the brevity of the form, and its attendant directness, make good haiku timeless (and therefore very modern-seeming).

"An Old Man's Winter Night" is something that I try to visit each winter. I agree that the "thin frost" is nice, and I also like what follows: "almost in separate stars" -- which is something we all may have noticed in looking at frosted-over windows, but which Frost captures for us. But nearly every line has something lovely, I think.

We know the controversy Lionel Trilling created when at Frost's eightieth birthday gathering he, Trilling, called Frost a "dark poet." What? He's not the avuncular and cherubic old man sitting around the pot-bellied stove and uttering rustic wisdom?

I've always thought "An Old Man's Winter's Night" a terrifying poem, perhaps as "dark" a poem as Frost ever wrote. Some Frenchman (de Rochefoucald? Saint-Simon?)said humans could not stare directly at the sun and at truth. In some cases we might add "old age" and its trials (you see I soothe the ugly vision by saying "trials" in a vain attempt to equivocate or placate at what the mortal heart cries out) to the list. I think Larkin added old age to the list.

The poem is saturated with as much loneliness as any great poem can contain without stooping to bathos and arm-twisting pity.

Anonymous: thank you very much for those thoughts.

I agree with you about "An Old Man's Winter Night": I recall reading it when I was young (when some poetry was taught in public schools) and being frightened by it. And your observation that he doesn't rely upon bathos and pity is an excellent one. Not that we don't feel empathy.

And I eventually discovered that, in general, Frost is pretty scary. Thus, for instance, I'd say that "Desert Places" can give "An Old Man's Winter Night" a run for most terrifying Frost poem. And there are numerous other candidates. Even old chestnuts like "Stopping by Woods on a Snowy Evening" aren't the feel good pieces that some may think they are.