A watercolor painting of the Suffolk countryside, with Framlingham Castle in the distance, discovered in a Seattle antique store.  A tiny, carved agate hedgehog purchased in a tourist gift store on the shores of Lake Superior.

A black and white engraving (4 inches by 6 inches) of Archimedes being slain by a Roman soldier as he traces out a mathematical diagram on the floor with a stick (again, happened upon in an antique store).  A small, rectangular, ochre-colored flower vase acquired in a pottery shop in Hirosaki, northern Japan.

And an ordinary seashell -- a white cowrie -- found on a beach beside the Andaman Sea.  In light of an unexpected recent event, this last item now carries -- and will always carry -- the most emotional weight for me, in a way I had not foreseen.

All of the above are at hand as I write this.  Things.  You who are reading this likely have similar things nearby at this moment.  Things that have taken on a life of their own. 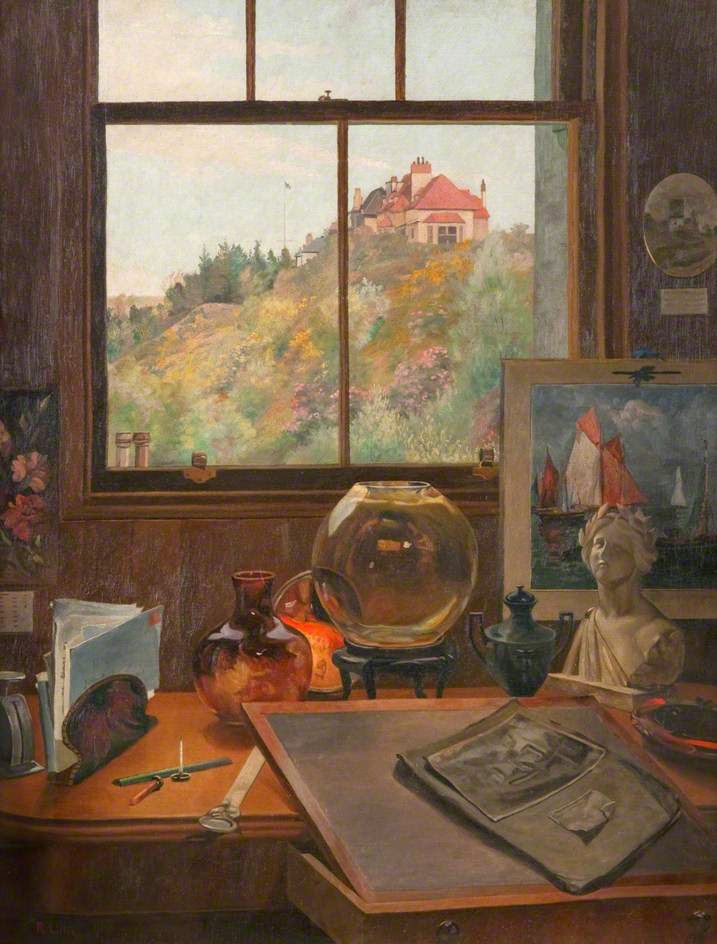 I had a bicycle called 'Splendid',
A cricket-bat called 'The Rajah',
Eight box-kites and Scotch soldiers
With kilts and red guns.
I had an album of postmarks,
A Longfellow with pictures,
Corduroy trousers that creaked,
A pencil with three colours.

Where do old things go to?
Could a cricket-bat be thrown away?
Where do the years go to?

Arthur Waley, in Ivan Morris (editor), Madly Singing in the Mountains: An Appreciation and Anthology of Arthur Waley (1970).

Through his translations, Arthur Waley (1889-1966) played a fundamental role in introducing traditional Chinese poetry to the English-speaking world.  (He and Burton Watson are the two best translators of Chinese verse into English.)  He also translated numerous Chinese and Japanese prose works into English, including Lao Tzu's Tao te Ching, The Analects of Confucius, and Lady Murasaki's The Tale of Genji.

I have only been able to find five original poems written by Waley.  "Song" is one of them.  It has a lovely feel to it:  like Po Chu-i writing in early 20th century England -- which makes perfect sense. 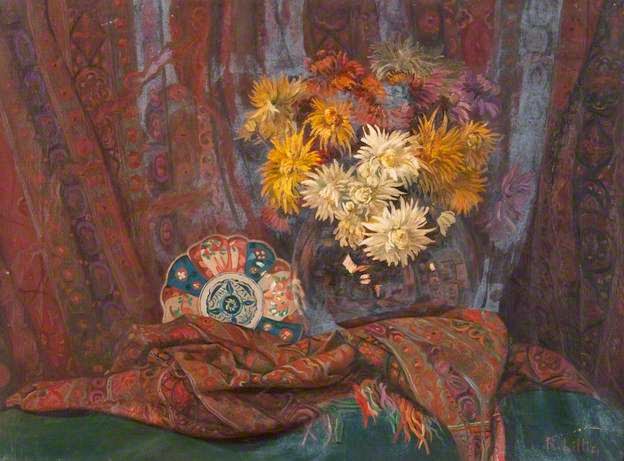 My cane, my pocket change, this ring of keys,
The obedient lock, the belated notes
The few days left to me will not find time
To read, the deck of cards, the tabletop,
A book and crushed in its pages the withered
Violet, monument to an afternoon
Undoubtedly unforgettable, now forgotten,
The mirror in the west where a red sunrise
Blazes its illusion.  How many things,
Files, doorsills, atlases, wine glasses, nails,
Serve us like slaves who never say a word,
Blind and so mysteriously reserved.
They will endure beyond our vanishing;
And they will never know that we have gone. 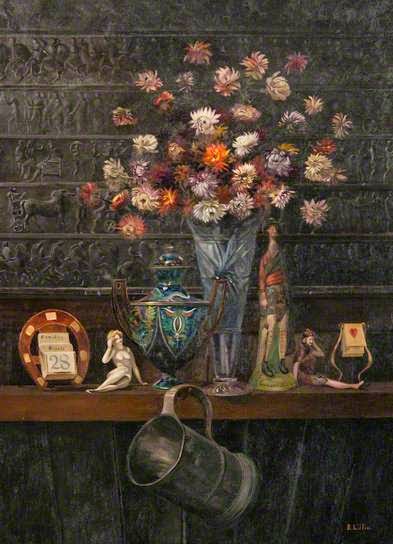 Robert Lillie, "Part of My Studio Mantel"
Posted by Stephen Pentz at 1:32 AM

A wonderfully evocative post Mr Pentz.
Like yourself, I too have similar objects around me; a stone containing a fossilized starfish found on a Dorset beach, my father's monogrammed cigarette case, my grandfather's pen knife, a small polished stone given to me by my wife many years ago.
As you say,each one is loaded with connections returning us to follow half-forgotten paths we may not have trodden for some time.
The Arthur Waley poem is delightful and previously unknown to me, the Borges too. The final four lines are superb.
Thank you.

Things do indeed have a life of their own which is entwined with ours- a kinship. And then there's the things owned by one's loved ones, a parent, husband, wife - so charged with memory and emotion.
Thanks for the poetry, the art.

Mr Ashton: yes, it's nice how the smallest item can bring alive parts of our lives. I'm pleased you liked the Waley and Borges poems. I wish Waley had had the time to write more of his own poetry -- the few that I have seen are delightful.

Ms Ahearn: I like your thought that the lives of things are "entwined" with our own lives, and that we have a "kinship" with them. That is a fine way of describing the relationship. Yes, I should have mentioned things owned by others in our lives: evocative in their own way.

i've shared these two poems about things with several dear people who also love poetry. thank you for all the beauty and joy you always bring to my life.

stephen, i'm in america at the moment! i'm in milwaukee, and have visited the chicago art institute. will be spending a week each at houston, texas and at fremont, california, before going to copenhagen and amsterdam.

wanted to consult you on places i could visit to see good paintings, or that might be connected with the lives of poets. any recommendations?

anj: welcome to the U.S.A.! I'm delighted that you are here, and I hope you are enjoying yourself. If you're still in Milwaukee as I write this, you may be enjoying snow!

I'm happy that you were able to visit the Art Institute, which is one of our country's best art museums, I think.

Unfortunately, I'm not familiar with any museums in Houston. As for Fremont, you will be, as you know, within driving distance of San Francisco, which has the Museum of Modern Art and the Fine Arts Museums, which are wonderful. I notice that there is a Georgia O'Keeffe special exhibit at the de Young (one of the Fine Arts Museums) through May 11.

I cannot think of any connections with the lives of poets in either Houston or San Francisco. Sorry! I tend to be, as you know, more connected with poets from the UK.

By the way, Copenhagen is wonderful. For art, I recommend the Statens Museum for Kunst (National Gallery of Denmark) and the Ny Carlsberg Glypotek. Look for paintings from the Danish "Golden Age" of painting: the 19th century.

It sounds like you are having a wonderful holiday! I hope you enjoy yourself.