As I age, one of my resolutions is this:  Don't be querulous.  The flip side is this:  Be grateful.  I don't claim to be without fault in obeying my own resolutions.  But I try to keep them in mind.

On a daily basis the news of the world arrives at our virtual doorstep.  The news is rarely good.  In fact, it is usually horrific.  Otherwise it would not be news.  Our personal lives are, like all else, subject to the vacillations of constant change, good and bad.  Permanent bliss with happy faces all around is not our lot, I'm afraid.  But this state of affairs ought not to preclude gratitude.

If I may be forgiven a personal note.  Earlier this year, I received the proverbial wake-up call in the middle of the night (2:15 a.m., to be exact) bringing news of personal loss from half a world away.  Today I watched a row of trees shedding yellow leaves in the wind against a dark grey sky.

Ivor Gurney, Selected Poems (edited by George Walter) (J. M. Dent 1996). All of the ellipses appear in the original.

Ivor Gurney can embarrass you into gratitude for life and its never-ending wonders.  He most likely wrote "The Escape" in the autumn of 1923, after he had been involuntarily committed to an asylum.  But this is certainly not the poem of a madman.  Far from it.  From the beginning to the end of his life, Gurney never ceased to love and treasure everything in the World, no matter how humble.  We all can learn from him. 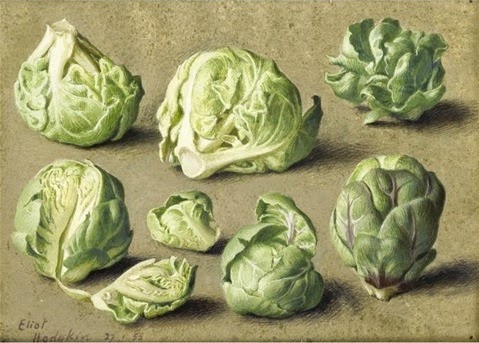 Here is another way of looking at things, working from the inside out.

Poem Written in a Copy of Beowulf

At various times I have asked myself what reasons
moved me to study while my night came down,
without particular hope of satisfaction,
the language of the blunt-tongued Anglo-Saxons.
Used up by the years my memory
loses its grip on words that I have vainly
repeated and repeated.  My life in the same way
weaves and unweaves its weary history.
Then I tell myself:  it must be that the soul
has some secret sufficient way of knowing
that it is immortal, that its vast encompassing
circle can take in all, accomplish all.
Beyond my anxiety and beyond this writing
the universe waits, inexhaustible, inviting.

"The universe waits, inexhaustible, inviting."  If we think of the universe in this fashion, how can we approach it -- and our own life -- with anything but gratitude?

Earth fine to handle;
The touch of clouds,
When the imagining arm leaps out to caress
Grey worsted or wool clouds.

Wool, rope, cloth, old pipes
Gone, warped in service;
And the one herb of tobacco,
The herb of grace, the censer weed,
Of whorled, blue, finger-traced curves. 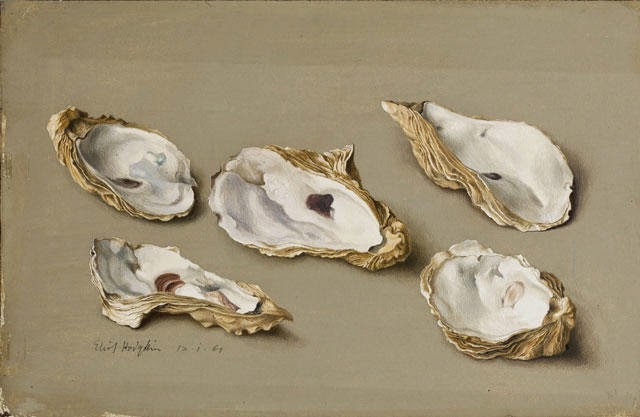 To revisit, with apologies, a statement that has appeared here on more than one occasion:  "Not how the world is, is the mystical, but that it is." Ludwig Wittgenstein, Tractatus Logico-Philosophicus, Proposition 6.44 (italics in original) (translated by C. K. Ogden) (1921).

What things I have missed today, I know very well
But the seeing of them each new time is miracle,
Nothing between Bredon and Dursley has
Anyday yesterday's precise unpraised grace.
The changed light, or curve changed mistily
Coppice now bold cut:  yesterday's mystery.
A sense of mornings, once seen, for ever gone,
Its own for ever; alive, dead, my possession.

Words like "mystical" (Wittgenstein), "soul" (Borges), and "miracle" (Gurney) cause many moderns to feel uncomfortable.  They regard the words with irony.  (Irony being their primary way of looking at the World.) The twin gospels of Science and Progress make such words, and those who utter them, seem old-fashioned, out-of-sync.  But these things are a matter of belief all the way around, aren't they? 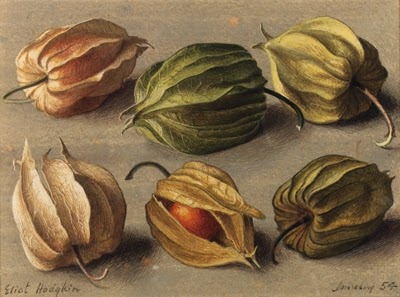 I can't think of any other poet who understood the preciousness of physical reality more than Wallace Stevens.

Large Red Man Reading
There were ghosts that returned to earth to hear his phrases,
As he sat there reading, aloud, the great blue tabulae.
They were those from the wilderness of stars that had expected more.
There were those that returned to hear him read from the poem of life,
Of the pans above the stove, the pots on the table, the tulips among them.
They were those that would have wept to step barefoot into reality,
That would have wept and been happy, have shivered in the frost
And cried out to feel it again, have run fingers over leaves
And against the most coiled thorn, have seized on what was ugly
And laughed, as he sat there reading, from out of the purple tabulae,
The outlines of being and its expressings, the syllables of its law:
Poesis, poesis, the literal characters, the vatic lines,
Which in those ears and in those thin, those spended hearts,
Took on color, took on shape and the size of things as they are
And spoke the feeling for them, which was what they had lacked.

A recent poem you posted by Borges has prompted me to track down a copy of his poetry for myself, though I have read some of his short stories I am not very familiar with his poetry, so I'm looking forward to his Selected Poems arriving in the next few days.

"The universe waits, inexhaustible, inviting." If we think of the universe in this fashion, how can we approach it -- and our own life -- with anything but gratitude?"

How true, I try when walking through this world to keep in mind these wonderful words by the writer May Sarton;

I mainly know Gurney as a composer of music, so this poetry is very welcome. That's another name for the list for after I retire and get more leisure! The line
"An Act Never Is Worthier Than In Freeing Spirit That Stifles Under Ingratitude's Weight"
is well-chosen; it is extraordinary how it seems so complicated and fussy at first glance, yet reveals its beauty once we take a little trouble. It carries huge amounts of meaning due to its superb structure. Genius indeed.

Anonymous: Thank you very much for the Stevens poem, which goes very well here. I agree with you about Stevens' appreciation of the World around us: for all of his emphasis on the importance of Imagination, he knew that Imagination meant nothing without the World around us. Thus: "to step barefoot into reality . . ."

Mr Ashston: Thank you very much for the quotation from May Sarton, which is perfect here. "The capacity for delight" is a wonderful phrase, as is "the gift of paying attention." Both are things that we need to aspire to. But which are often difficult on a day-to-day basis!

I'm happy to hear you are delving further into the poetry of Borges. I've only begun to do so myself within the past few years. Much of what he writes flies over my head, I'm afraid. But I have come across a number of poems by him that are very moving.

As for Gurney: his (to quote Sarton again) "capacity for delight" and "gift of paying attention" are always inspiring to me, and, as I suggest in the post, humbling: despite his many struggles, he never seemed to lose them, even in his darkest times.

Sam Vega: I'm pleased that you focused on "An act never is worthier . . ." "The Escape" was the first poem of Gurney's that I ever read. I came across it in The Oxford Book of Short Poems, and was immediately entranced. My experience was similar to yours: at first, the phrase seemed odd. But I eventually realized that it is, as you say, "genius indeed."

I think our experience with this one passage is typical (for me at least) of reading Gurney as a whole. And the description you use is perfect: it "reveals its beauty once we take a little trouble." Gurney's mind (and feelings) worked in a unique and remarkable way, and his poetry reflects that. Even after reading his poems for many years, I still struggle at times with his way of putting things. But it is always worth the effort to work through.

Again, what you say of this particular phrase is perfect, and applies to much of what he wrote: "It carries huge amounts of meaning due to its superb structure." I often need to go back and unpack exactly what he is saying. But the rewards are nearly always there.

Thank you very much for your comments: they articulate wonderfully the unique nature of Gurney's poetry.


In the below poem by Emily Dickinson she avers that the things she sees from her window-- common things such as a pine tree, a bird, a squirrel--give meaning to life and buttress the faith in in God. If purpose and plan in life, a kind of coherence, are to be found--if they are to be found at all--lie in something as simple as a pine tree or a bird's song.

All aspects of Nature, she seems to say, the "apprehension" of the quotidian, are "God's introductions" and are "To be hallowed--accordingly."

we are back to Blake's dictum: We need to see not with the eye but through the eye. The most elementary things teem with meaning to a sensibility like Dickinson's. One can link her with Stevens in advising us that we need not look up for understanding, beyond what is outside our window: Again if meaning is to be found, it is found in everyday reality.

Was the Pine at my Window a "Fellow
Of the Royal" Infinity?
Apprehensions—are God's introductions—
To be hallowed—accordingly—

Mr. Floyd: As always, thank you very much for bringing us something wonderful by Dickinson -- another wonderful choice, and right on point. Her comparison of the Pine to an entire Sea is wonderful. A side-note: her reference to "a 'Fellow of the Royal' Infinity" immediately brought to mind Gurney's poem "The Cloud," which refers to a "Cloud royal."

Again, thank you very much. This is much-appreciated.