The magnolias are blossoming.  As are the cherries and plums and pears. "Loveliest of trees, the cherry now . . ."  But more on that in a moment.

The following ode by Horace begins as a paean to spring.  But, as is often the case, Horace uses a precisely-observed opening scene as a prelude to a wide-ranging meditation on the human condition.  This is what makes him so lovable, and his poetry so beguiling and delightful:  who knows where he will take us next?

The nimble hour that turns the circling year,
And swiftly whirls the pleasing day,
Forewarns thee to be mortal in thy care,
Nor cramp thy life with long delay:

The Spring the Winter, Summer wastes the Spring,
And Summer's beauty's quickly lost,
When drunken Autumn spreads her drooping wing,
And next cold Winter creeps in frost.

The moon, 'tis true, her monthly loss repairs,
She straight renews her borrow'd light;
But when black Death hath turn'd our shining years,
There follows one Eternal Night.

When we shall view the gloomy Stygian shore,
And walk amongst the mighty dead,
Where Tullus, where Aeneas went before,
We shall be dust, and empty shade:

Who knows if stubborn Fate will prove so kind,
And join to this another day?
What e'er is for thy greedy heir design'd,
Will slip his hands, and fly away:

When thou art gone, and Minos' sentence read,
Torquatus, there is no return;
Thy fame, nor all thy learned tongue can plead,
Nor goodness shall unseal the urn:

For chaste Hippolytus Diana strives,
She strives, but ah! she strives in vain;
Nor Theseus' care, and pious force reprieves
His dear Pirithous from his chain.

Horace (translated by Thomas Creech), Odes, Book IV, Ode 7, in Thomas Creech, The Odes, Satires, and Epistles of Horace (1684).  "Unswoln" (line 3) is the spelling as it appears in Creech's original translation.

The ode is addressed to Torquatus (line 30), a member of a well-known Roman family who was a lawyer by profession (hence the reference to "thy learned tongue" in line 31).  Tullus Hostilius (line 23)  is traditionally identified as the third king of Rome.  Minos (line 29) was the judge of the dead in the Underworld.  Hippolytus (line 33) was falsely accused by his stepmother Phaedra of attempting to seduce her.  He was killed by order of his father Theseus before Diana was able to disclose Phaedra's deception to Theseus.  Pirithous (line 36), accompanied by Theseus, went down to the Underworld to claim Persephone as his wife.  Theseus was able to escape with the aid of Hercules, but Pirithous remained forever imprisoned. 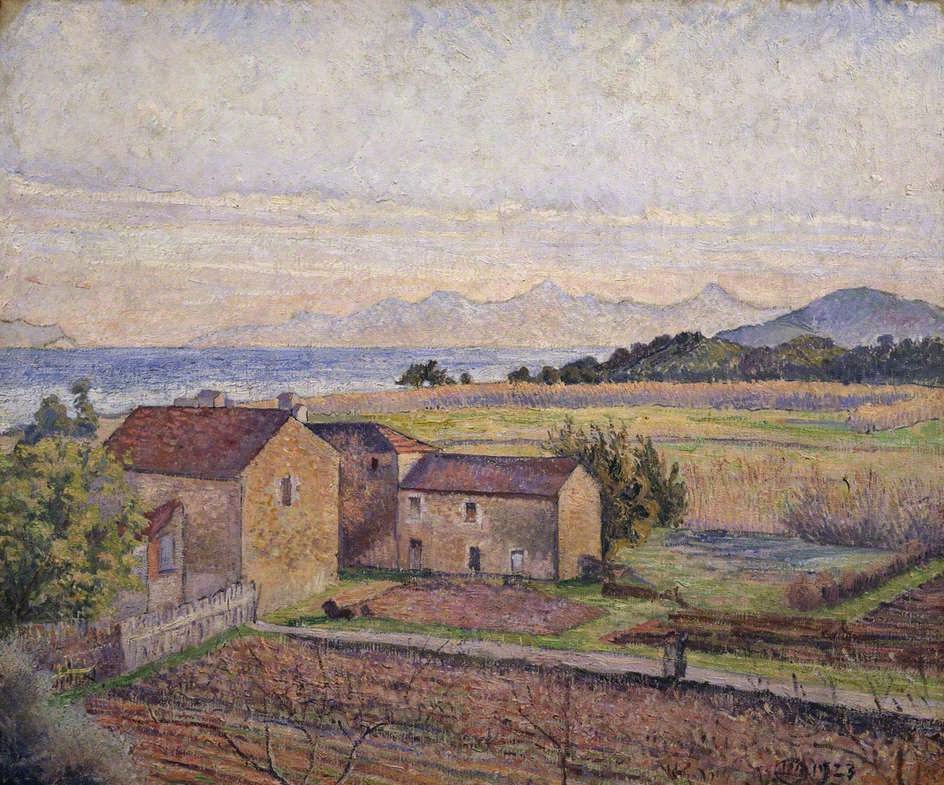 Even if A. E. Housman had not been a classical scholar and a professor of Latin, one suspects that Horace's ode was the sort of thing that would catch his fancy, given his temperament.  And, sure enough, it did.

"I attended [Housman's] lectures for two years.  At five minutes past 11 he used to walk to the desk, open his manuscript, and begin to read.  At the end of the hour he folded his papers and left the room.  He never looked either at us or at the row of dons in the front.  One morning in May, 1914, when the trees in Cambridge were covered with blossom, he reached in his lecture Ode 7 in Horace's Fourth Book, 'Diffugere nives, redeunt iam gramina campis.'  This ode he dissected with the usual display of brilliance, wit, and sarcasm.

Then for the first time in two years he looked up at us, and in quite a different voice said:  'I should like to spend the last few minutes considering this ode simply as poetry.'  Our previous experience of Professor Housman would have made us sure that he would regard such a proceeding as beneath contempt.  He read the ode aloud with deep emotion, first in Latin and then in an English translation of his own.  'That,' he said hurriedly, almost like a man betraying a secret, 'I regard as the most beautiful poem in ancient literature,' and walked quickly out of the room.

A scholar of Trinity (since killed in the War), who walked with me to our next lecture, expressed in undergraduate style our feeling that we had seen something not really meant for us.  'I felt quite uncomfortable,' he said.  'I was afraid the old fellow was going to cry.'" 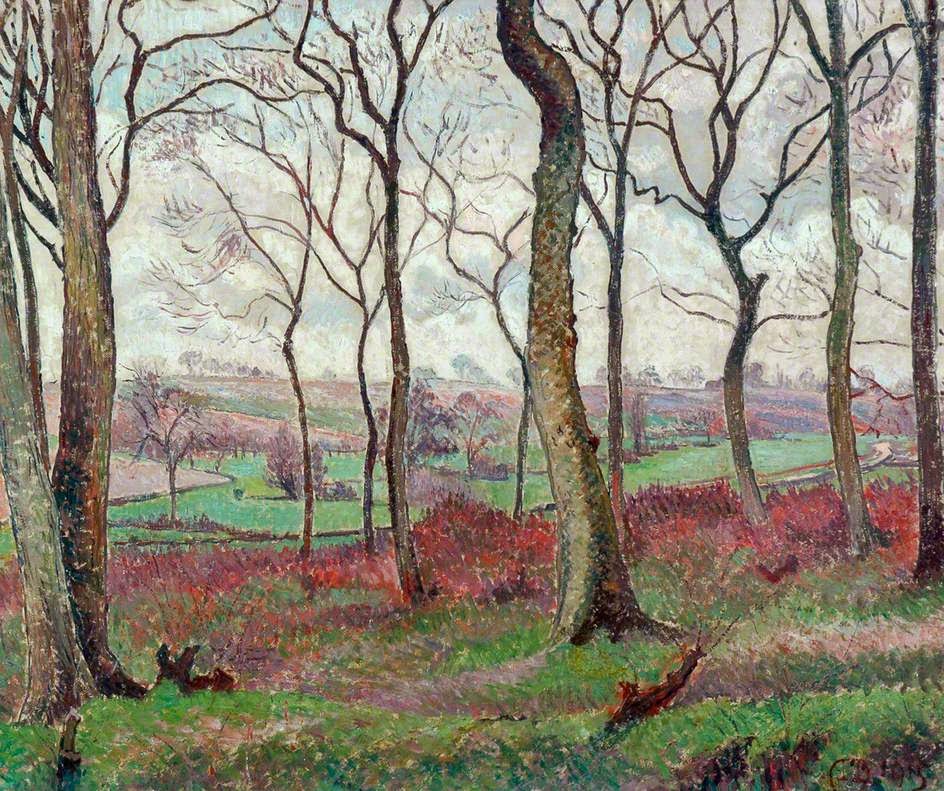 Here is the translation that Housman read to his students in Cambridge on that May morning in 1914.

Night holds Hippolytus the pure of stain,
Diana steads him nothing, he must stay;
And Theseus leaves Pirithous in the chain
The love of comrades cannot take away.

Horace (translated by A. E. Housman), in A. E. Housman, More Poems (1936).  "Shaws" (line 1) are groves or thickets of trees.  Ancus Marcius (line 15) (whose name Creech omits from his translation) is traditionally identified as the fourth king of Rome. 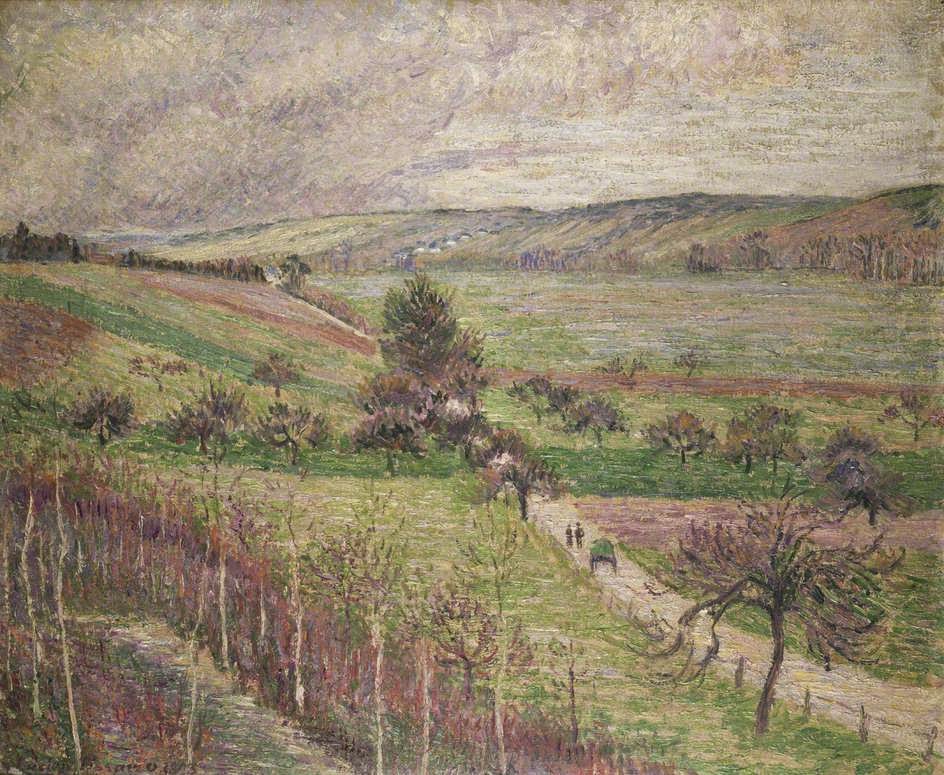 We thus come to Housman's "loveliest of trees," which has appeared here before, but which is always worth revisiting at this time of year.  Reading it (well, reading any of Housman's poems) in conjunction with Horace's ode, one can understand why the ode provoked such an emotional response in Housman.

Housman wrote the poem between May and July of 1895.  Archie Burnett (editor), The Poems of A. E. Housman (Oxford University Press 1997), page 320.  The date of Housman's translation of Horace's ode is unknown. However, it was first published in a periodical in 1897.  Ibid, page 426. 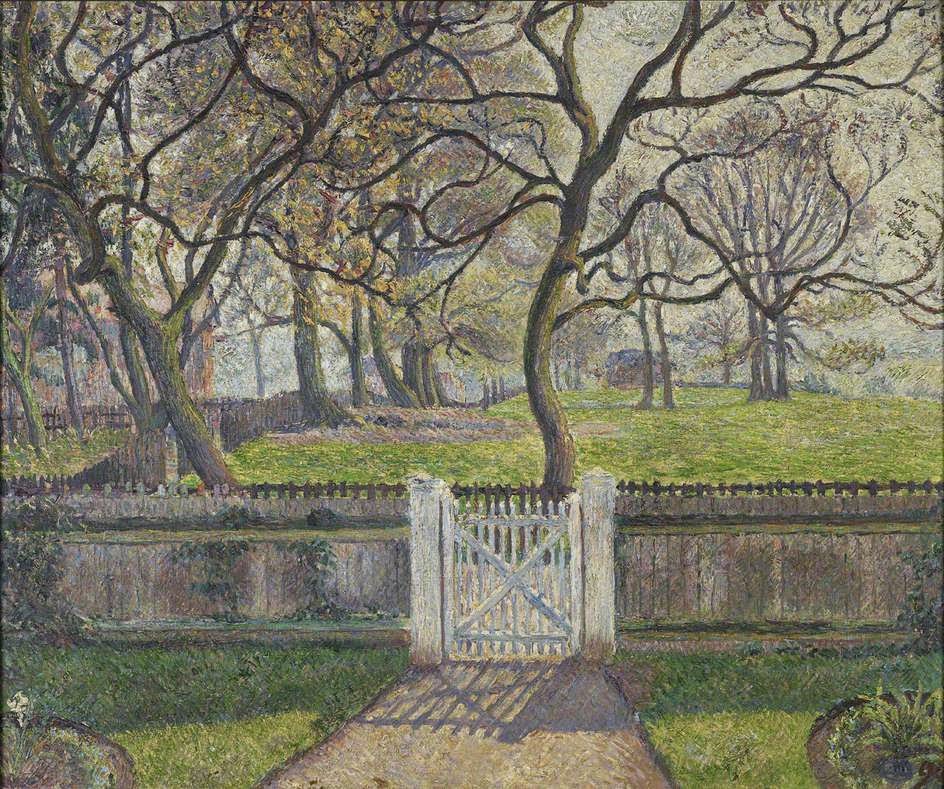 Non diffugerunt nives ibi; I spent about an hour at dusk shoveling the walks yesterday.

I understand the necessity of accurate scholarship, but find it strange that considering the ode as poetry should be have been unusual. It brings to mind the professor Jacques Barzun mentions once or twice, who told his classes that a particular play was Aeschylus's most interesting, for it contained nearly all the known exceptions in Greek grammar.

A wonderful post. The ode by Horace is simply beautiful, and, to have it followed by Housman's version, well, you've made my day. That said, of the two I like the original better - never thought I'd be saying something like that where Housman is concerned.

Sadly, in my part of the world (Housman country in central England), nothing is blossoming yet.

I just finished Irvin Yalom's latest book, "Creatures of a Day." The epigraph of the book is words from the great stoic Marcus Aurelius. The emperor's words would glean approval, I think, from Horace and Housman.

Nothing is so beautiful as spring --
When weeds, in wheels, shoot long and lovely and lush;
Thrush's eggs look little low heavens, and thrush
Through the echoing timber does so rinse and wring
The ear, it strikes like lightnings to hear him sing;
The glassy peartree leaves and blooms, they brush
The descending blue; that blue is all in a rush
With richness; the racing lambs too have fair their fling.

What is all this juice and all this joy?
A strain of the earth's sweet being in the beginning
In Eden garden. -- Have, get, before it cloy,
Before it cloud, Christ, lord, and sour with sinning,
Innocent mind and Mayday in girl and boy,
Most, O maid's child, thy choice and worthy the winning.

Hopkins's poetry seems to run the gamut of emotion, from deepest despair to a loud exultation of unrestrained joy. In his poem "Spring" he suggests that a pure heart can see Eden in spring's tumultuous outpouring, it's prodigal birth.

Spring, however, bursts forth, cascading in colors and sweetness in the air, and then it will fall from ripeness, it's beauty failing. "Embrace it," says Hopkins, "before it cloy." Get it before it becomes "sour with sinning."

We live in a fallen world, one that we have indeed stained with sinning, but the emblazoned arrival of spring reminds us what we have lost, and what some think we can find again after we, like the tender blossom, fade into ash, and find our new and eternal spring.

George: Part of me felt a bit guilty posting about Spring in its fullness given the situation of my readers on the East Coast. In any event, thank you for the Latin variation on Horace!

Thank you as well for the thoughts on odes and for Barzun's quote, which is new to me. As for Horace's odes, I regret that I lack the ability to read them in Latin.

As ever, thank you very much for stopping by.

Mr Docker: Thank you very much for visiting again, and for your thoughts. Although it has not yet arrived for you (see also George's comment above), I hope Horace's ode has put you in the mood for Spring's arrival.

Anonymous: Thank you for the wonderful passage from Marcus Aurelius, which goes perfectly here. The translation is lovely. It is remarkable how these sorts of thoughts are similar throughout the world: for instance, the passage you quote sounds a great deal like traditional Chinese poetry, or like something that Lao Tzu might have written.

Anonymous: Thank you for Hopkins's poem, and for your own thoughts on Spring. Coincidentally, I posted the same poem here in March of last year, focusing on thrushes in Spring. I agree with you completely about the "gamut of emotion" in Hopkins's poetry -- often in a single poem.

I find that Barzun's story involved Euripides, not Aeschylus: "Gentlemen: this is the most interesting play by this author: it contains every one of the irregularities in Greek grammar." He quotes this in "Of What Use the Classics Today", collected in Begin Here: The Forgotten Conditions of Teaching and Learning.

I must say that my Latin is not much good. Were I turned loose on an ode unassisted, I would make the more careless of the boys in Kipling's story "Regulus" look like A.E. Houseman himself.

George: Thank you for the follow-up comments on the Barzun quote and on Kipling.

I was unaware of "Regulus," but the summary of it on the Kipling Society website tells me that it concerns a Latin class on Horace's Ode 5 from Book II. I will have to track it down. You may already know this, but the Society's entry indicates that an article on it titled "Kipling, Stalky, Regulus & Co.: A Reading of Horace Odes 3.5" by T. J. Leary appeared in Volume 55, No. 2 (2008) of the UK journal Greece & Rome. Sounds interesting.