I have no choice in the matter, of course.  These thoughts are merely human wishful thinking.  The story of our lives.  The wind does as it pleases.

This week, however, was the best of both worlds:  four days of blue skies, with a steady breeze that cleared the clouds, but which was not strong enough to bring down the leaves, most of which are not yet ready to let go. One might imagine that this could go on for ever.

Wind that is in orchards
Playing with apple-trees
Soon will be leagues away
In the old rookeries.

Vaguely it arises,
Swiftly it hurries hence: --
Like sudden beauty
Blown over sense:

Like all unheeded
Beautiful things that pass
Under the leaves of life,
Just touching the grass.

F. W. Harvey, September and Other Poems (Sidgwick and Jackson 1925). 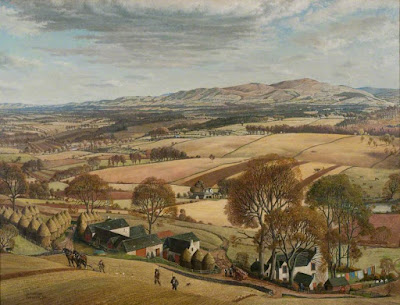 Passing through sublimity, autumn brings us to simplicity.

Ryōkan (translated by John Stevens), in John Stevens, One Robe, One Bowl: The Zen Poetry of Ryōkan (Weatherhill 1977), page 67.

There is a message in this simplicity, but I shan't be dogmatic about it.  I will only say that the messengers from the non-natural world try their best to complicate life, when it is actually very simple. "Everything passes and vanishes;/Everything leaves its trace."

Blowing from the west,
Fallen leaves gather
In the east.

Is it a matter of "what to make of a diminished thing"?  (Robert Frost, "The Oven Bird.")  Perhaps.  But here is another way of looking at it:  "Now I can see certain simplicities/In the darkening rust and tarnish of the time,/And say over the certain simplicities."  (Howard Nemerov, "A Spell before Winter.") 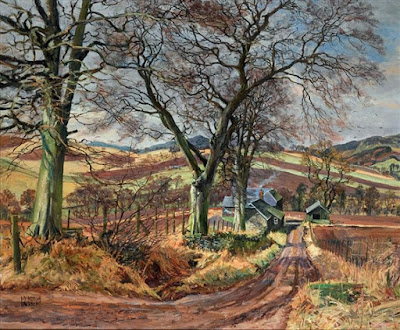 On the road to simplicity, one departs from the Land of Know-It-Alls and the Kingdom of Opinions.  Ah, what a relief that is!  No more explanations, no more agendas, no more hectoring.  No more "news."  A wondrously unknowable world.

Often I've heard the Wind sigh
By the ivied orchard wall,
Over the leaves in the dark night,
Breathe a sighing call,
And faint away in the silence,
While I, in my bed,
Wondered, 'twixt dreaming and waking,
What it said.

Nobody knows what the Wind is,
Under the height of the sky,
Where the hosts of the stars keep far away house
And its wave sweeps by --
Just a great wave of the air,
Tossing the leaves in its sea,
And foaming under the eaves of the roof
That covers me.

And so we live under deep water,
All of us, beasts and men,
And our bodies are buried down under the sand,
When we go again;
And leave, like the fishes, our shells,
And float on the Wind and away,
To where, o'er the marvellous tides of the air,
Burns day.

"Nobody Knows" appears in one of Walter de la Mare's collections of "children's verse."  But de la Mare's poems for children are like Christina Rossetti's "nursery rhymes":  they are ostensibly directed at an audience of children, but the wisdom of the poems belies this seeming limitation.

Who has seen the wind?
Neither I nor you:
But when the leaves hang trembling
The wind is passing thro'.

Who has seen the wind?
Neither you nor I:
But when the trees bow down their heads
The wind is passing by. 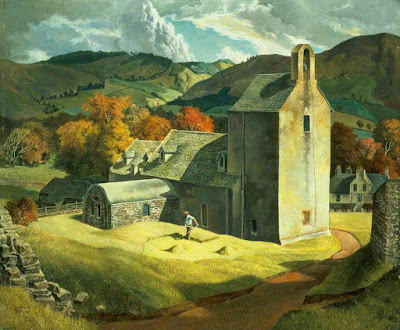 And, yes, what is autumn without a visit to mortality?  We all know what lies at the heart of the season's sublimity, what gives the wind and the leaves their wistful and bittersweet beauty.  Autumn is, after all, life itself, presented to us for a few breathtaking days that rush away as we try to hold on to them.

"Undertake each action as one aware he may next moment depart out of life."

Marcus Aurelius (translated by Jeremy Collier), Ibid, in Jeremy Collier, The Emperor Marcus Antoninus, His Conversation with Himself (1702).

What is autumn saying?  The same thing that the World is saying:  Pay attention.  Live.

The autumn wind is blowing;
We are alive and can see each other,
You and I. 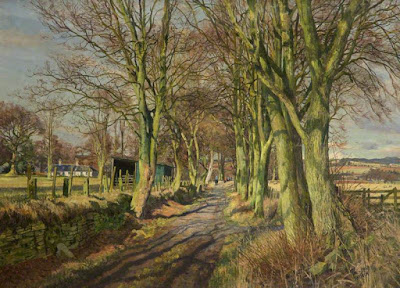 James McIntosh Patrick, "Byroad near Kingoodie" (1962)
Posted by Stephen Pentz at 7:50 AM

In the short passage below Rilke expresses the ambivalence we feel when we contemplate autumn rather than gambol in it: we love the ripeness of it all, occasionally convincing ourselves this ripeness will hang rich and full and fecund forever. Of course it never does.

The blind wind shakes the multicolored leaves from the trees, making for a bright carpet and a hissing sound when we walk through them.

Then the rains come and what was once bright--the reds and oranges and yellows--now is sodden, smeared black, and it is then, perhaps, that we first comprehend the darkness of autumn, our playtime over, the specter of the eternal night and the moist earth of the blind grave. Always softly trailing in the wake of autumn, barely clear to our ears even as we strive to hear, yes, the music of autumn is always of mortality.

"At no other time (than autumn) does the earth let itself be inhaled in one smell, the ripe earth; in a smell that is in no way inferior to the smell of the sea, bitter where it borders on taste, and more honeysweet where you feel it touching the first sounds. Containing depth within itself, darkness, something of the grave almost."

Mr. Floyd: Thank you for your autumn contemplation, and for the passage from Rilke. Yes, I should not have focused solely on sight and sound: the scent of autumn is definitely an integral part of its mood. The scent of the earth, as Rilke notes, and the scent of burning leaves. The latter -- alas! -- being nothing but a memory. I'd love to live again in those now vanished days when piles of leaves smoldered on everyone's lawn up and down the street in the late afternoon and at evening. The world was a much better place then. But I am no doubt showing my age.

Lovely, lovely choices for autumn. Thank you so much for doing what you do.

Mr. Ireland: It's a pleasure to hear from you again. Thank you very much for your kind words.

I imagine it is beautiful in your neck of the woods right now -- although perhaps a bit rainy this weekend, with a hurricane offshore. I hope it doesn't bring the leaves down too early.

I'm pleased that you like the poems. Autumn seems to bring out the best in a fair number of poets, and perhaps in the rest of us as well. Or so I like to think.

Again, thank you for visiting. I always appreciate hearing from you.

It's Spring here, but the sky is overcast and brooding today, and I am in a vaguely tired and melancholy mood, so these Autumnal thoughts and verses are fitting, even on the other side of the globe.

Just a great wave of the air,
Tossing the leaves in its sea,
And foaming under the eaves of the roof
That covers me.

Deb: Thank you for reminding me of that! I have a number of readers from the Southern Hemisphere, and I ought to be more cognizant of the seasonal differences. But you make an excellent point: these seasonal moods can arise at any time throughout the year. Sometimes, for instance, I hanker to read about the dead of winter at the height of summer. I suspect that most of us are that way. In any case, I hope you are having a beautiful Spring!

Those four lines are my favorite lines in the poem as well. I think that some of de la Mare's loveliest lines are found in his poems for children, which I discovered after failing to read them for many years.

Oh yes, I get that longing for anything that reminds me of Winter when we're being crisped by the sun in Feb/Mar!! :-)

And I also dismissed Walter de la Mare for awhile, remembering him fondly but dimly from my childhood, and assuming that he had only written for children, that his poetry wouldn't appeal to me now. It was my moderate (ha!) obsession with Edward Thomas that led me to try reading his work again, thankfully. He had such a magical way with words.

Deb: I agree with you completely that de la Mare had "a magical way with words." I've always liked the fact that he remained (to use an old-fashioned phrase) "true to his Muse." Thus, in the middle of the 20th century, he continued to use words such as "thee," "thy," "alas," and "welladay" in his poems. This renders his verse "old-fashioned" in the minds of some, but I think not. His style was certainly different from that of his friend Edward Thomas (as you know), but they both, I think, share this quality: they speak to us with honesty about what it is to be a human being.

Thank you very much for your follow-up thoughts.

Mr Pentz, Your posts over recent weeks have helped sustain me through a difficult time. I've dropped by regularly and read what has been written here with great interest and some frustration at having no time to add my own comments. Unfortunately my daughter has been going through a difficult period in her life and my wife has sustained quite a serious back injury. Fortunately she is on the mend now, though it will be some time before she is fully recovered.
Knowing that First Known When Lost is here as a place of tranquility and fine words has been a boon.
How lovely to see De La Mare, as I think we've mentioned before he is one of those poets impossible to tire of.

Autumn has been like the return of Summer here over the past two weeks, and though I've had little opportunity to be outside experiencing it I did manage a good few hours at my allotment on Sunday catching up on chores around vegetable plots and fruit trees, accompanied delightfully by a robin, who followed me for much of the morning,singing loudly and cheering me along at my tasks.

Mr Ashton: I'm very sorry to hear of your recent circumstances. I had wondered about your absence here, so I'm pleased to have you return. Of course, I fully understand where your priorities must lie at times like these. I wish the best for you and your family as you move forward.

If the poems that have appeared here have provided "a place of tranquility" at times, I am humbled and gratified. You mention de la Mare, and I think that the quiet wisdom that one so often finds in his poems is a fine example of how poetry can provide solace and a breathing space during difficult times in our lives.

I'm happy to hear that you've been able to spend time at your allotment, and that the weather has cooperated while you have been able to get out. That sort of thing can be greatly restorative.

As always, thank you very much for visiting and for sharing your thoughts. I wish you and your family well.