First and foremost, autumn awakens an impulse to run out into the World before it is too late.  Time is passing.  And the duration of autumn's beauty is numbered by the leaves on the trees.

But autumn also awakens a contrary impulse:  an urge to settle in, to turn inward.  Consider the endearing activity of the squirrels at this time of year: when I see them intently scurrying about among the fallen leaves, I think of the long nights that await both them and us. Yes, it is time to make ready a burrow, a nest, a refuge.

This little house
No smaller than the world
Nor I lonely
Dwelling in all that is.

Kathleen Raine, from "Short Poems," The Oracle in the Heart (Dolmen Press 1980).

But, whether our movement be outward or inward, I suspect that for most of us the emotional tenor of either movement is the same:  that pensive, wistful, and bittersweet autumnal feeling that we have come to know so well.  It only deepens with the years.  But this is not a bad thing.  Far from it.  Many of us live for autumn.

"They seek retirements in the country, on the sea-coasts, or mountains: you too used to be fond of such things.  But this is all from ignorance.  A man may any hour he pleases retire into himself; and nowhere will he find a place of more quiet and leisure than in his own soul:  especially if he has that furniture within, the view of which immediately gives him the fullest tranquillity.  By tranquillity, I mean the most graceful order.  Allow yourself continually this retirement, and refresh and renew your self." 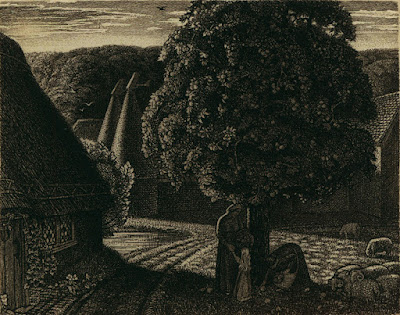 As I have noted here on more than one occasion, I see nothing wrong with sentimentality.  The default modern posture is irony.  The essence of modern irony is self-regarding knowingness and distance from life.  Who needs that?  I will take sentimentality over irony any day.  It is a matter of choosing warmth over coldness.

"The unspeakable blessedness of having a home!  Much as my imagination has dwelt upon it for thirty years, I never knew how deep and exquisite a joy could lie in the assurance that one is at home for ever.  Again and again I come back upon this thought; nothing but Death can oust me from my abiding place.  And Death I would fain learn to regard as a friend, who will but intensify the peace I now relish."

"A Quiet Normal Life."  Isn't this what most of us want?  "Here in his house and in his room,/In his chair, the most tranquil thought grew peaked . . ."

At first, not breathed on,
Not a leaf or a flower knew you were gone,
Then, one by one,

The little things put away,
The glass tray
Of medicines empty,

The poems still loved
Long after sight failed
With other closed books shelved,

How the little owl, the rose-bowl,
The Brig-o' Doone paperweight,
The Japanese tea-set

Lived on their shelf, just here,
So long, and there,
Binding memories together,

Binding your love,
Husband and daughter in an old photograph,
Your woven texture of life

A torn cobweb dusted down,
Swept from the silent room
That was home.

Kathleen Raine, The Oval Portrait and Other Poems (Enitharmon Press 1977). 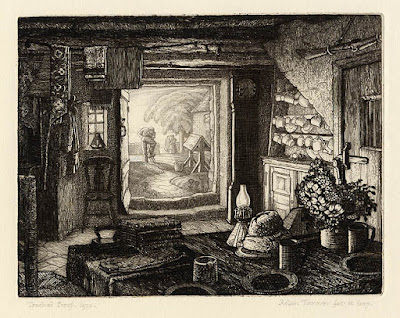 The outward and inward movements of autumn take place within a larger context, of course.  The seasonal round feels as if it will go on for ever.  The wistfulness of autumn is, we know, a prelude to "the bleak mid-winter," which has its own charms, but which will in turn awaken in us thoughts of "the cherry hung with snow."  And so it beautifully goes.

There is, though, a deeper theme at work beneath it all.

Words in the Air

The clear air said:  'I was your home once
but other guests have taken your place;
where will you go who liked it here so much?
You looked at me through the thick dust
of the earth, and your eyes were known to me.
You sang sometimes, you even whispered low
to someone else who was often asleep,
you told her the light of the earth
was too pure not to point a direction
which somehow avoided death.  You imagined
yourself advancing in that direction;
but now I no longer hear you.  What have you done?
Above all, what is your lover going to think?'

And she, his friend, replied through tears of happiness:
'He has changed into the shade that pleased him best.' 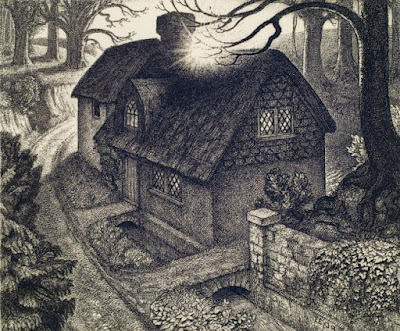 Inhabitants of the air?  Yes.  There's no getting around that.  But, in the meantime, here we are.

My hut lies in the middle of a dense forest;
Every year the green ivy grows longer.
No news of the affairs of men,
Only the occasional song of a woodcutter.
The sun shines and I mend my robe;
When the moon comes out I read Buddhist poems.
I have nothing to report, my friends.
If you want to find the meaning, stop chasing after so many things. 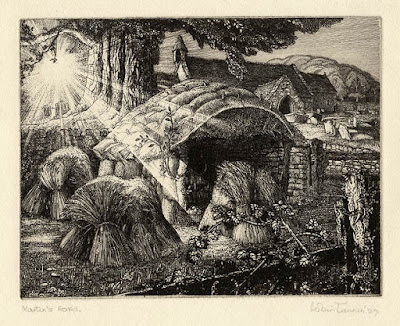 When I read your post on the coming of fall--and I agree with your sentiments; I, too, am sick of venal irony, a poor camouflage of cynicism and ugly sarcasm--I remembered that forty years ago or so, in my salad days when I was green in judgment, my face needing no razor to scythe its thin fuzz, I read a novel titled "The Human Season." I forget who wrote it.

The title, I remember, comes from the poem "Immortal Autumn" By Archibald McLeish, a poem I looked up then (I don't know that anyone reads MacLeish anymore). I don't think I've read the poem since I read it all those decades ago. I looked it up after reading your post. You imply in your post that autumn is, indeed, the human season, and it seems to me that if any season is a human one, it is autumn. Here is the poem:

I speak this poem now with grave and level voice
In praise of autumn, of the far-horn-winding fall.

I praise the flower-barren fields, the clouds, the tall
Unanswering branches where the wind makes sullen noise.

I praise the fall: it is the human season.
Now
No more the foreign sun does meddle at our earth,
Enforce the green and bring the fallow land to birth,
Nor winter yet weigh all with silence the pine bough,

But now in autumn with the black and outcast crows
Share we the spacious world: the whispering year is gone:
There is more room to live now: the once secret dawn
Comes late by daylight and the dark unguarded goes.

Between the mutinous brave burning of the leaves
And winter’s covering of our hearts with his deep snow
We are alone: there are no evening birds: we know
The naked moon: the tame stars circle at our eaves.

It is the human season. On this sterile air
Do words outcarry breath: the sound goes on and on.
I hear a dead man’s cry from autumn long since gone.

I cry to you beyond upon this bitter air.

Mr. Floyd: Thank you very much for your thoughts on autumn, and for MacLeish's poem, which is new to me. I think he is right: I think that autumn is indeed "the human season." Of course, I confess that I am biased in the matter, given that autumn is by far my favorite season. Who knows why that is so (for any of us). In my experience, it is something that I have felt since my earliest stirrings of consciousness. I have no idea why. (I fully appreciate that others may feel differently, and have their own favorite seasons, for their own reasons, which I respect.)

As always, thank you for stopping by, and for sharing your thoughts. And now, because it is a sunny, cool beautiful autumn day where I live, I am going to walk out into it.

The poem by Kathleen Raine moved me very much - that emptied room, the well loved possessions distributed to begin a new life with another. I've been there.
Thanks as always for your beautiful blog.
Mary

Mary: I'm pleased you liked Raine's poem. It does capture the essence of those circumstances in a lovely and affecting manner, doesn't it? A number of poems in that same volume are about her mother, and they are similarly lovely and moving.

As always, thank you very much for sharing your thoughts, and for your kind words about the blog. I hope you are enjoying autumn.