Nearly. Not Quite Yet.

Here is where we find ourselves:  "Now it is September and the web is woven,/The web is woven and you have to wear it."  Earlier this week, I watched a butter-yellow caterpillar crossing a path, headed toward the dry, leaning grass of a broad meadow.  A few days later, I noticed another caterpillar (this one black, with a dark orange band) veering off a different path, bound for the duff-covered floor of a silent, shadowy grove of tall pines.

Although the autumnal equinox came and went more than a week ago, the final turning has not occurred.  Still, the signs are afoot.

The western wind has blown but a few days;
Yet the first leaf already flies from the bough.
On the drying paths I walk in my thin shoes;
In the first cold I have donned my quilted coat.
Through shallow ditches the floods are clearing away;
Through sparse bamboos trickles a slanting light.
In the early dusk, down an alley of green moss,
The garden-boy is leading the cranes home. 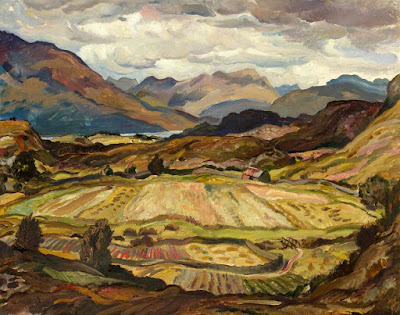 As long-time (and much appreciated!) readers of this blog may recall, I am fond of describing autumn as the season of bittersweet wistfulness and wistful bittersweetness.  Is there a tinge of sadness?  Of course.  More than a tinge, actually.  But this only serves to heighten the beauty.

That which is lovely is lovely because it is departing.  This is true of all of the World's beautiful particulars at all times of the year.  But the pang of departure is keener in autumn.  It is a rueful, yet a happy, pang.  It bears within it the possibility of acceptance and serenity. 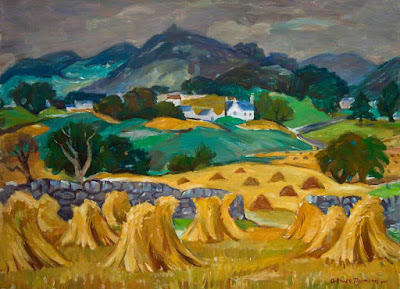 The threshold has not yet been crossed.  At the beginning of the past week we enjoyed a cool, brilliant mackerel sky day.  In Japan, the clouds in such a sky are called urokogumo (uroko means "fish-scale"; kumo means "cloud"; the "k" sound of kumo is changed to "g" for euphonic purposes in the compound word):  hence, a fish-scale cloud sky.  In Japanese culture, urokogumo carries with it strong associations of autumn.  I can understand why:  the sight is heart-catching at any time of year, but particularly in autumn, when the blue seems deeper behind the bright white clouds spread across the sky.

Later in the week we had an 80-degree, cloudless day:  a brief Indian summer (as we called it in Minnesota when I was growing up) or St Luke's summer (as it is known in the United Kingdom).  The warm breeze of that day carried a chill thread within it.  Or was this merely my imagination?

Fragile, notice that
As autumn starts, a light
Frost crisps up at night
And next day, for a while,
White covers path and lawn.
"Autumn is here, it is,"
Sings the stoical blackbird
But by noon pure gold is tossed
On everything.  Leaves fall
As if they meant to rise.
Nothing of nature's lost,
The birth, the blight of things,
The bud, the stretching wings.

Elizabeth Jennings, Celebrations and Elegies (Carcanet Press 1982).  For another lovely poem by Jennings on the season, please see "Song at the Beginning of Autumn," which has appeared here in the past. 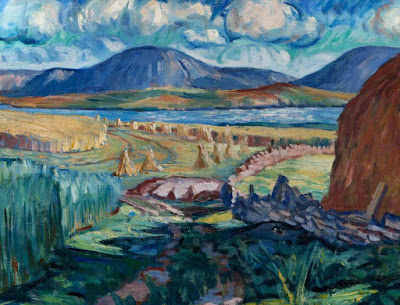 For now, the green canopies remain overhead, although the universe of green has become paler and thinner.  The birds keep up their continual conversation, although their numbers have dwindled.  All is proceeding according to plan.  Constancy amid constant change.

I may speak of autumnal wistfulness, bittersweetness, and sadness, but make no mistake:  my predominant emotions at this time of year are exhilaration, joy, and gratitude.  "We live in a constellation/Of patches and of pitches,/Not in a single world."  How can we be anything but grateful, joyful, and exhilarated?

Even in a person
most times indifferent
to things around him
they waken feelings --
the first winds of autumn. 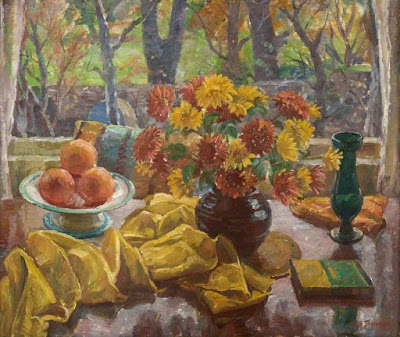 Thank you for another beautiful selection. I thought the best English poem was the Norman Nicholson one from an earlier selection that you linked to - I must have missed it before. The description of grass in slanting light is very good. Incidentally, I've never heard of "St Luke's Summer" here in the UK. We apparently adopted your "Indian Summer" back in Victorian times, and I've not heard another term for it, even in the countryside. A St. Luke's Summer should be around the 18th October, which would make the contrast with the "normal" weather even more apparent.

The final Japanese poem is simply wonderful. Somehow the poet manages to make an observation about psychology and perception and epistemology, but without all the ponderous phrases that I would need in order to explain it only half as well. Reading it, I seem like a barbarian or an animal catching a glimpse of something properly civilised.

We're having a similar time out here on the opposite end of the continent. There's a lovely chill in the air, the sun is lower, the shadows are longer, yet the hummingbirds haven't headed south yet, and our overgrown flower garden is a riot of butterflies and moths. We all know what's coming, but nature won't let us acknowledge it yet...

Sam Vega: Thank you very much for your kind words about the post.

Yes, the Nicholson poem is lovely, isn't it? I agree with you about the first three lines: the slanting light, and the shadows it casts, embody, for many of us, the essence of autumn (and of late summer as well). As for "St Luke's summer": as you probably know, Nicholson was a lifelong inhabitant of Cumbria. (According to the jacket of his Collected Poems he "was born in Millom, Cumbria, in 1914 and lived there, with a single interruption, for the rest of his life.) Hence, perhaps the term was (is) more prevalent in that part of the UK.

I'm pleased you liked Saigyō's poem. It is wonderful, isn't it? He wrote a similar waka, which is one of the best-known, best-loved poems in Japan (the translation is again by Burton Watson):

Even a person free of passion
would be moved
to sadness:
autumn evening
in a marsh where snipes fly up.

The word "kokoro" appears in both waka. Watson translates it as "passion" in this waka, and as "feelings" in the waka that appears in the post. The Chinese character (kanji) for "kokoro" is the same character as that for "xin" in Chinese. As I have noted here in the past, the character is a marvelous one: in both Chinese and Japanese it can mean "heart," but it can also mean "mind." In addition, it can carry connotations of "spirit," "soul," or "core." Thus, it can mean heart-mind-soul all at the same time.

As ever, it is a pleasure to hear from you. Thank you very much for visiting again.

Jeff: Wonderfully put. Last week, for instance, I noticed a neighbor's garden that was filled to the brim with dahlias and other late-summer, early-autumn flowers. It is an affecting time of year, isn't it? October has always been my favorite month, but in recent years (why did it take so long?) I have come to appreciate more and more the beauties of September.

Thank you very much for sharing your thoughts. It is always good to hear from you.

I was working on my allotment at the weekend. It was a gloriously sunny and very warm autumn day. The occasional breeze pulled down drifts of yellow leaves onto the dark earth from trees along the bordering fence. Morning glories and chrysanthemum were still flowering and drawing the bees. It was hard to believe that at almost any time now the flowers will be gone, the bees too.

I find myself wishing these good days might last a while longer because it is so good to be outside and present as witness to nature slowing down. There is sadness, of course, but a sense that all moves on in spite of our wants and desires.
Nature follows its rhythms. On recent mornings the chill has been more noticeable, a change that reminds us to be out walking and noticing when we can, savouring these alterations.

“Constancy amid change” , as you so aptly say.

The lines of Wallace Stevens are lovely.

We live in a constellation
Of patches and of pitches,
Not in a single world

What a wonderful description of this time of the year. Your choice of the Elizabeth Jennings poem, Autumn reminded me of another poem of hers, which you probably know, and though it is probably more about autumn moving towards winter.
At the moment that is quite hard to believe as we are experiencing a definite Indian summer over the last few days

The Smell of Chrysanthemums

The chestnut leaves are toasted. Conkers spill
Upon the pavements Gold is vying with
Yellow, ochre, brown. There is a feel,
Of dyings and departures. Smoky breath
Rises and I know how Winter comes
When I can smell the rich chrysanthemums.

It is so poignant and it makes me mourn
For what? The going year? The sun's eclipse?
All these and more. I see the dead leaves burn
`And everywhere the Summer lies in, heaps.
I close my eyes and feel how Winter comes
With acrid incense of chrysanthemums.

I shall not go to school again and yet
There's an old sadness that disturbs me most.
The nights come early; every bold sunset
Tells me that Autumn soon will be a ghost,
But I know best how Winter always comes
In the wide scent of strong chrysanthemums.

John: Thank you very much for your lovely thoughts on autumn. They capture well the beauty of, and the emotions associated with, this time of year. (A side-note: you mention the bees: I already miss them.)

And thank you as well for the poem by Jennings, which is new to me. I love how she comes back to the chrysanthemums in the final line of each stanza. As you probably know, the chrysanthemum ("kiku" in Japanese) is a characteristic autumn flower in Japanese poetry (as well as being the national flower). For instance, the following waka is by Saigyō (as translated by Burton Watson):

So deep into autumn
their fellow flowers
are all gone --
if the frost would only hold off,
leave me the incomparable chrysanthemums!

As you might expect, chrysanthemums are also an important presence in traditional Chinese poetry. For instance, the following well-loved line by T'ao Ch'ien has been alluded to many times both by Chinese poets and by Japanese haiku and waka poets: "I pick chrysanthemums by the eastern hedge." (The translation is by Burton Watson.) The line appears in the 10-line poem which begins "I built my hut in a place where people live" (which I have posted here in the past).

It is wonderful how these beautiful particulars appear in poetry throughout all ages and in all places.

As ever, it is a delight to hear from you. Thank you again for sharing your thoughts, and the poem.