Until I read the following poem by Norman Nicholson, I was not aware of the term "St Luke's Summer."  I then learned that it refers to a period of unseasonably warm weather occurring around the time of St Luke's feast day: October 18.  The unexpected arrival of a St Luke's Summer (or, as it was called in the Scandinavian and Lutheran Minnesota of my youth, Indian Summer) ups the already bitter-sweet ante of autumn, doesn't it?

The low sun leans across the slanting field,
And every blade of grass is striped with shine
And casts its shadow on the blade behind,
And dandelion clocks are held
Like small balloons of light above the ground.

Beside the trellis of the bowling green
The poppy shakes its pepper-box of seed;
Groundsel feathers flutter down;
Roses exhausted by the thrust of summer
Lose grip and fall; the wire is twined with weed.

The soul, too, has its brown October days --
The fancy run to seed and dry as stone,
Rags and wisps of words blown through the mind;
And yet, while dead leaves clog the eyes,
Never-predicted poetry is sown. 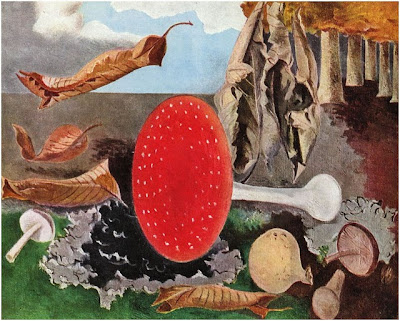 'Swan Song' is one of 22 paintings featured in my new book 'Paul Nash in Pictures: Landscape and Dream' which is out soon.

Love the poems and pictures - inspiring and beautiful

Mr Russell: thank you very much for visiting, and for your kind words. Coincidentally, I have been stopping by your blog for quite a while, and, as a result, discovered your wonderful books on the works of Eric Ravilious. I was delighted to find out about your new book on Paul Nash as well.