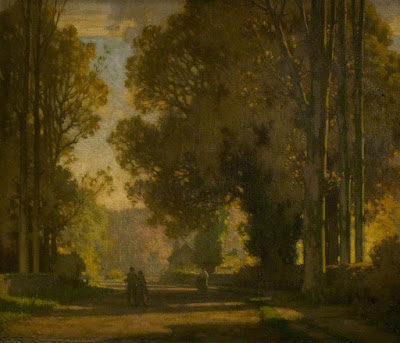 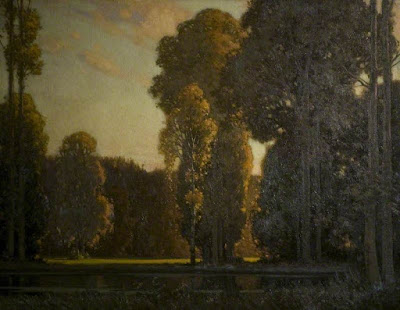 William Knight, "Autumn Evening"
Posted by Stephen Pentz at 12:05 AM

I was going to comment on your latest post, on deaths in September, but then I decided this post seems a little lonely. The pictures on this one, especially the first one, perfectly express the warm gentle greeny-gold September we've been having.
In the past week I've been a lotos-eater, enjoying the flowers on my deck. Wonderful that I could find "The Lotos-Eaters" on the internet, since it wasn't in any anthology I have. What a poem it is, so redolent of late-summer excess.
And what you wrote about melancholy made me think of a way I felt when I was young, & came to express as "happy sadness". A truly September sentiment.
Susan

Susan: Thank you very much for those lovely thoughts. Now you've got me in the mood for returning to Tennyson! After reading your comment, I pulled his poems from the shelf and visited "The Lotos-Eaters." "The mild-eyed melancholy Lotos-eaters came." There is an autumnal feel to a great deal of Tennyson's poetry, isn't there? (Even if a poem, or a passage of a long poem, is not explicitly set in autumn.) Thank you for the reminder.

"Happy sadness" is a wonderful phrase, and has a place in any consideration of melancholy in general, or of the melancholy of autumn in particular. As you may recall, on more than one occasion I have written here of the bittersweet wistfulness and wistful bittersweetness of autumn. Your phrase "happy sadness" is perhaps of a similar character. Without being overly presumptuous, I think I may be acquainted with the "happy sadness" of which you speak. Melancholy is not a bad thing.

I think the paintings in the post evoke the color and the cast of light of the feeling you mention. Your phrase is perfect: "warm gentle greeny-gold." I agree with you that the first painting captures that color and light particularly well.

Thank you very much for stopping by again. As I have said before, I greatly appreciate your long-time presence here. I'm happy to have the opportunity to once again wish you a lovely and wonderful autumn.