Christina Rossetti, A Pageant and Other Poems (Macmillan 1881). The title comes from Chapter 8, Verse 20, of the Book of Jeremiah (King James Version):  "The harvest is past, the summer is ended, and we are not saved."

I have been reading Christina Rossetti's poems and the Meditations of Marcus Aurelius for the past week or so.  The poet and the emperor have provided me with daily reminders of our transience, evanescence, and mortality.  They are two peas in a pod.  One Christian, one pagan, but more alike than one might imagine.

"Consider frequently, how swiftly all things which exist, or arise, are swept away, and carried off.  Their substance is as a river in a perpetual course.  Their actions are in perpetual changes, and the causes subject to ten thousand alterations.  Scarce any thing is stable. And the vast eternities, past and ensuing, are close upon it on both hands; in which all things are swallowed up.  Must he not, then, be a fool, who is either puffed up with success in such things; or is distracted, and full of complaints about the contrary; as if it could give disturbance of any duration?" 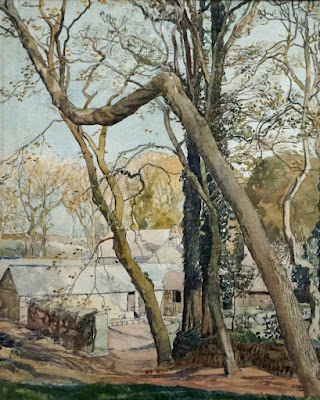 The following poem is one of Christina Rossetti's many strange and wonderful contemplations, part autobiography, part religious confession, but withal a thing of Beauty and Truth.  It is also a fine end of summer poem.  The final two lines are two of the loveliest I know.

From Sunset to Star Rise

Go from me, summer friends, and tarry not:
I am no summer friend, but wintry cold,
A silly sheep benighted from the fold,
A sluggard with a thorn-choked garden plot.
Take counsel, sever from my lot your lot,
Dwell in your pleasant places, hoard your gold;
Lest you with me should shiver on the wold,
Athirst and hungering on a barren spot.
For I have hedged me with a thorny hedge,
I live alone, I look to die alone:
Yet sometimes when a wind sighs through the sedge
Ghosts of my buried years and friends come back,
My heart goes sighing after swallows flown
On sometime summer's unreturning track.

Christina Rossetti, Goblin Market, The Prince's Progress, and Other Poems (Macmillan 1875).  There will be no attempt at explanation or explication from me.  One thought, however:  it is well to consider how the title of the poem relates to the poem itself.

"Observe continually, that all things exist in consequence of changes. Enure yourself to consider that the nature of the universe delights in nothing more than in changing the things now existing, and in producing others like them.  The things now existing are a sort of seed to those which shall arise out of them.  You may conceive that there are no other seeds than those that are cast into the earth or the womb; but such a mistake shews great ignorance." 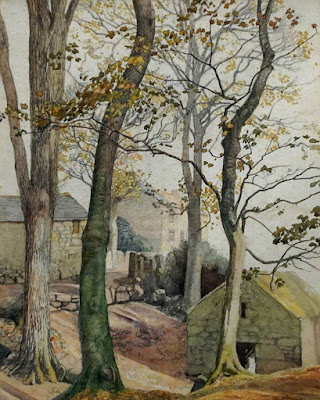 Eleanor Hughes, "Boleigh Farm"
Posted by Stephen Pentz at 12:05 AM

Summers in central Virginia typically mean sweltering temperatures with high humidity, but this has been a dry summer. Our chokecherry and black walnut are already dropping yellow leaves. Last weekend, we had a lovely four-day span of temperatures ranging from the mid-70s to the low-50s, enough to leave the windows open all the time. I hope the lack of rain doesn't dim the autumn leaf display, but I suppose next autumn will likewise be here in seemingly no time.

Two years ago, in late August, I spent a week in the hospital with what would eventually turn out to be gallstones. One of the things that I remember most about it is how cold I felt after six days without a single bite of food. I would sometimes get up in the pre-dawn hours and shuffle with my IV stand down the hallway for a little exercise. At the end of the floor was a large glass window overlooking the parking lot and surrounding land. I would stand there shivering under my blanket and look at the condensation on the glass, thinking how delightfully odd it was to feel as if fall had arrived already. Even in my morphine-addled state, I appreciated getting what felt like a sneak preview of a coming attraction. Had anyone asked me my thoughts on the possibility of a weeklong hospital stay beforehand, I'm sure I would have been aghast, but in hindsight, I actually look back fondly on that experience.

Since then, I've come to appreciate this brief time of year in its own right. Late August has become associated with chilly autumn thoughts in my mind. Perhaps especially as we age, we just want to pump the brakes a little, to savor anticipation rather than hurry on to indulgence. It will all arrive soon enough; I'd rather stretch these seasonal fermatas out as much as I can.

Damian: It's good to hear from you again. Thank you very much for your lovely meditation on late August: I agree with you completely about the benefits of coming to appreciate it, and, as you say, "savor anticipation" of what is to come. (And you are a better man than I am for being able to do so in the midst of an unexpected hospital stay for gallstones! I'm not sure I could manage that.)

For me, it begins with the unmistakable slant of yellow light that arrives sometime around the middle of August, accompanied by a slight deepening of shadows. And then one day the warm wind contains a single cold thread within it. I agree with you that, as we age, we ought to "pump the brakes a little" on these transitions that occur throughout the year. As much as I look forward to the glory (and wistfulness) of high autumn in October and early November, I have become fonder and fonder of late August and September over the years. The reason is clear, of course: time is short. A "seasonal fermata" is a fine way of putting it.