Toward the end of November, the robins begin to gather in small flocks for the winter.  One hears the sound of constant twittering in a distant tree.  This seems unusual, since bird-sounds mostly vanish as autumn deepens.  But then one sees them: robins hopping from branch to branch, in conversation, debating their next step.  Once a plan of action has been agreed upon, they leave the tree one by one or in small groups, continuing their daily round.  Our winter companions.  A comforting sight.
Time Out
It took that pause to make him realize
The mountain he was climbing had the slant
As of a book held up before his eyes
(And was a text albeit done in plant).
Dwarf cornel, gold-thread, and maianthemum,
He followingly fingered as he read,
The flowers fading on the seed to come;
But the thing was the slope it gave his head:
The same for reading as it was for thought,
So different from the hard and level stare
Of enemies defied and battles fought.
It was the obstinately gentle air
That may be clamored at by cause and sect
But it will have its moment to reflect.
Robert Frost, A Witness Tree (Henry Holt 1942). 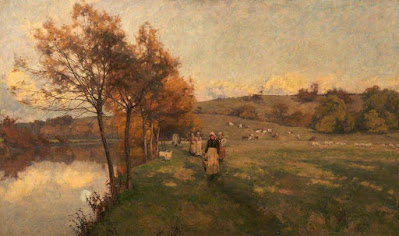 Alfred Parsons (1847-1920), "Meadows by the Avon"
Yesterday, near twilight, I walked beside a long puddle filled with intricate, innumerable bare branches, pink-tinged white sunset clouds, and darkening blue sky.  The reflected world seemed to be another world entirely -- beautiful, but out of reach.  A few moments later, still walking, the brilliant puddle now behind me, I realized how completely wrong I had been: what I had seen was the World.  How could it be otherwise?  Do you sometimes find it hard to believe that the World is as beautiful as it is?  It is good to be reminded of one's ignorance.  I receive this reminder every day.  But the World never gives up on me.
"Attachment to the self renders life more opaque.  One moment of complete forgetting and all the screens, one behind the other, become transparent so that you can perceive clarity to its very depths, as far as the eye can see; and at the same time everything becomes weightless.  Thus does the soul truly become a bird."
Philippe Jaccottet (translated by Tess Lewis), notebook entry (May, 1954), in Philippe Jaccottet, Seedtime: Notebooks 1954-1979 (Seagull Books 2013), page 1. 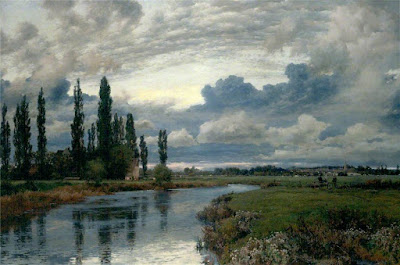 Alfred Parsons, "Poplars in the Thames Valley"
Cloudy winter days sometimes end in a thin band of yellow sky at the edge of the horizon, along the blue-black silhouette of the peaks of the Olympic Mountains, beyond the waters of Puget Sound.  That narrow strip of brightness has a beckoning aspect to it.  A promise of sorts before a long winter night.
Reflections
of stars, on the riverbank?
Plum blossoms.
Sugiwara Sōi (1418-1485) (translated by Steven Carter), in Steven Carter, Haiku Before Haiku: From the Renga Masters to Bashō (Columbia University Press 2011), page 56. 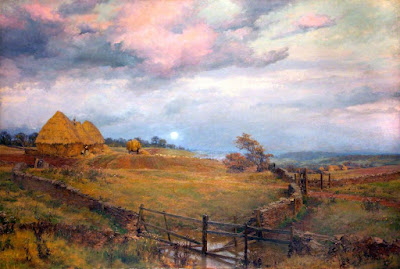 Alfred Parsons,  "On the Cotswolds"
Posted by Stephen Pentz at 11:15 PM

I ran across the below while reading James Agee's "Let Us Now Praise Famous Men." I think it apposite to your post:

Is that what Wittgenstein meant by "The world is everything that is the case."? Anyway, Randall Jarrell used that as the title of a volume of poems.

I get out of the house twice most days at this time of year: a walk or run in the morning, a walk in the middle of the day. I tend to pay more attention to the built or social world than to nature: this house or that family, rather than these trees, those shrubs. But I do live in a beautiful neighborhood on the edge of a large park.

Summers, autumns, and especially springs are showier around here. Still, winter has its beauty.

Bruce: Thank you very much for sharing this: it goes perfectly here, particularly with Jaccottet's thoughts, I think. But with the Frost poem as well. It's been ages since I read Let Us Now Praise Famous Men. Having you quote from it brings back fond memories -- both of Agee's writing and of the wonderful photographs by Walker Evans, whose work captivated me at an impressionable age.

As always, thank you for visiting. I wish you and your loved ones all the best in the coming year.

George: It's good to hear from you again. As always, thank you for stopping by, and for sharing your thoughts.

At the risk of opening a can of worms, Wittgenstein's first sentence ("The world is everything that is the case") must be read in the context of his final sentence ("What we cannot speak about we must pass over in silence"), don't you think? The first and last sentences provide a necessary frame for what he sought to accomplish. (However, a century's worth of academic philosophers have failed to heed what Wittgenstein pointed out to them in his preface: "the second thing in which the value of this work consists is that it shows how little is achieved when these problems are solved.") But, again, I don't wish to open that can of worms. But I do think Wittgenstein's final sentence provides a context for the words from Frost, Jaccottet, and Sugiwara Sōi as well. They all point towards silence.

As for walks, it seems to me that their charm lies in the surprises we come upon, whether the surprise comes from the natural world or from humans. Near the beginning of the pandemic (in late February or early March) I saw a man practicing fly-fishing in the middle of a large green meadow on a sunny day, not a drop of water in sight.

Best wishes for the coming year.

"The surprises we come upon"

Evening walk over, took down volume 1 of R.H. Blyth's Haiku, Easter Culture, randomly opened to p.203, paragraph beginning "When the mind is quiet" to the end of the chapter. Yes, the surprises we come upon. Happy New Year.

Mr. Maruskin: That's a wonderful exercise to perform with Blyth, isn't it? I often do the same thing when the mood for haiku strikes, and I am never disappointed with where I land in any of the four volumes. Of course, after reading your comment, I pulled out Eastern Culture, and went to page 203. In the two-and-a half pages between "When the mind is quiet . . ." and the end of the chapter we are given six lines from Pope ("Essay on Man"), six lines from Shelley ("Adonais"), a passage from Spinoza ("Ethics"), two lines from St. John of the Cross ("The Dark Night of the Soul"), and -- last but not least -- two haiku (one of them by Bashō). This is par for the course when it comes to Blyth, isn't it? And he is never trying to show off: everything relates directly to the point he is making. Thus, for instance, he makes a wise and lovely point in the pages you refer to. He is remarkable, marvelous, inexhaustible.

It is a cliché to say that a book "changed my life." But Blyth's four volumes did in fact change my life when I first encountered them 35 or so years ago. (A side-note: after I started reading Jaccottet about 5 or 6 years ago, I was surprised and delighted to discover that he is fond of Blyth and haiku. In an entry in Seedtime from August of 1960 he writes: "R. H. Blyth's Haiku, essential." Then, after transcribing several haiku translated by Blyth, he writes: "I could quote pages. While reading these four volumes, it occurred to me more than once that they contained, of all the words I have ever managed to decipher, those closest to the truth." I was astounded to read this, for I feel exactly the same way, and have felt that way for years. Earlier in the entry, Jaccottet writes: "These poems are wings that prevent you from collapsing.")

Well, your comment set me off an quite a flight, didn't it! But you've touched on something that is near and dear to me. Thank you for doing so. And thank you very much for the New Year's wishes. I wish you and your loved ones the best in the coming year.