As autumn departs, a thought:
All Night Long Regretting
the End of Autumn
Regret as I may,
even the bell
has a different sound now,
and soon frost will fall
in place of morning dew.
Saigyō (1118-1190) (translated by Burton Watson), in Burton Watson, Saigyō: Poems of a Mountain Home (Columbia University Press 1991), page 84.
I shall never quarrel with my beloved Saigyō, and his thought strikes home.  He and Marcus Aurelius are in agreement: "The world is a continual change."  (Marcus Aurelius, Meditations, Book IV, Section 3, in Francis Hutcheson and James Moor (translators), The Meditations of the Emperor Marcus Aurelius Antoninus (1742).)
And yet.  Last evening I saw a lovely crescent moon high in the southwestern sky over Puget Sound.  Constancy in the midst of change.  Apart from new meteor craters, cosmic debris, and human detritus scattered in a few places, has the moon altered over the millennia for those of us here on the ground, looking upward?  Hasn't it always been our unchanged, unchangeable, reliable companion?
Autumn's bright moon,
However far I walked, still afar off
In an unknown sky.
Chiyo-ni (1701-1775) (translated by R. H. Blyth), in R. H. Blyth, Haiku, Volume 3: Summer-Autumn (Hokuseido Press 1952), page 388.
Of Chiyo-ni's haiku, Blyth writes: "There is a feeling of separateness here which is not to be denied.  The poetess realizes that she and the moon are two different entities, in a different sky, in a different world."  (Ibid, page 388.)  He then provides a waka which, as Blyth puts it, "expresses that other side of truth":
Down from the mountain,
The moon
Accompanied me,
And when I opened the gate,
The moon too entered.
Kotomichi (1798-1868) (translated by R. H. Blyth), Ibid, page 388.
One need not make a choice.  Both are beautiful.  Both are true. 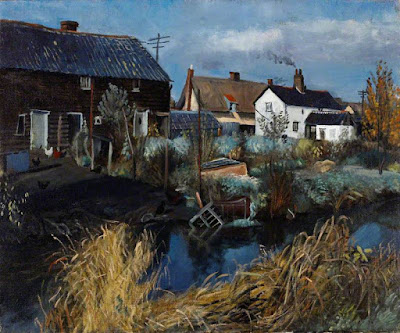 John Aldridge (1905-1983), "Autumn" (1946)
Perhaps Chiyo-ni's view and Kotomichi's view are merged and reconciled in William Wordsworth's lunar encounter in the winter of 1798:
A Night-Piece
The sky is overspread
With a close veil of one continuous cloud
All whitened by the moon, that just appears,
A dim-seen orb, yet chequers not the ground
With any shadow -- plant, or tower, or tree.
At last a pleasant instantaneous light
Startles the musing man whose eyes are bent
To earth.  He looks around, the clouds are split
Asunder, and above his head he views
The clear moon and the glory of the heavens.
There in a black-blue vault she sails along
Followed by multitudes of stars, that small,
And bright, and sharp along the gloomy vault
Drive as she drives.  How fast they wheel away!
Yet vanish not!  The wind is in the trees;
But they are silent.  Still they roll along
Immeasurably distant, and the vault
Built round by those white clouds, enormous clouds,
Still deepens its interminable depth.
At length the vision closes, and the mind
Not undisturbed by the deep joy it feels,
Which slowly settles into peaceful calm,
Is left to muse upon the solemn scene.
William Wordsworth, 1798 manuscript, in Beth Darlington, "Two Early Texts: A Night-Piece and The Discharged Soldier," in Jonathan Wordsworth (editor), Bicentenary Wordsworth Studies in Memory of John Alban Finch (Cornell University Press 1970), page 431.
1798: that charmed year for William and Dorothy Wordsworth (and for Samuel Taylor Coleridge as well).  Commentators on the poem have noted that it has its origin in a journal entry made by Dorothy on January 25, 1798.  (See, for example: Lucy Newlyn, William and Dorothy Wordsworth: 'All in Each Other' (Oxford University Press 2013), pages 57-59; Kenneth Johnston, The Hidden Wordsworth: Poet, Lover, Rebel, Spy (W. W. Norton 1998), pages 552-553.)  The thought is that William and Dorothy witnessed the scene together while out walking.
"The sky spread over with one continuous cloud, whitened by the light of the moon, which, though her dim shape was seen, did not throw forth so strong a light as to chequer the earth with shadows.  At once the clouds seemed to cleave asunder, and left her in the centre of a black-blue vault.  She sailed along, followed by multitudes of stars, small, and bright, and sharp."
Dorothy Wordsworth, The Grasmere and Alfoxden Journals (Oxford University Press 2002), page 142.
The "vision" recounted by Wordsworth brings to mind one of the fragments of blank verse in his Alfoxden notebook, which he kept during the first three months of 1798:
Of unknown modes of being which on earth,
Or in the heavens, or in the heavens and earth
Exist by mighty combinations, bound
Together by a link, and with a soul
Which makes all one.
William Wordsworth, fragment from the Alfoxden notebook, in Ernest de Selincourt and Helen Darbishire (editors), The Poetical Works of William Wordsworth, Volume 5 (Oxford University Press 1949), pages 340-341. 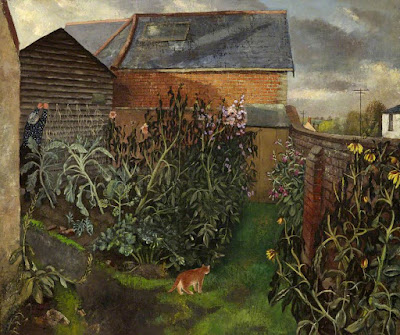 John Aldridge, "First Frost"
The moon is constant.  But, ah, dear readers, what of us?
The Limit
The silent friendship of the moon
(I misquote Virgil) has kept you company
since that one night or evening
now lost in time, when your restless
eyes first made her out for always
in a patio or a garden since gone to dust.
For always?  I know that someday someone
will find a way of telling you this truth:
"You'll never see the moon aglow again.
You've now attained the limit set for you
by destiny.  No use opening every window
throughout the world.  Too late.  You'll never find her."
Our life is spent discovering and forgetting
that gentle habit of the night.
Take a good look.  It could be the last.
Jorge Luis Borges (translated by Alan Trueblood), in Jorge Luis Borges, Selected Poems (edited by Alexander Coleman) (Viking 1999).
This is no cause for gloom, or melancholy.  Our quickly passing interval of "silent friendship" with the moon, with all the beautiful particulars of the World, is no small thing.  And the thought that the World will go on without us, the moon and the seasons forever coming and going, can be a source of comfort and serenity.
But Saigyō -- wonderful Saigyō -- takes us in another direction altogether:
Were we sure of seeing
a moon like this
in existences to come,
who would be sorry
to leave this life?
Saigyō (translated by Burton Watson), in Burton Watson, Saigyō: Poems of a Mountain Home, page 158. 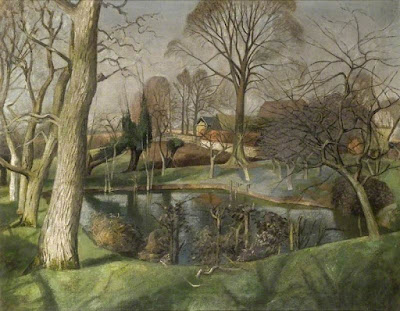 You cannot know what joy and comfort you give me. Locked down by the virus and on Hospice watch for my Beloved, you take me out of myself. You remind me there is Joy. Thank you, Julia

Julia: That's very nice of you to say. Thank you so much. I'm very sorry to hear of the circumstances you are in. I wish you all the best. Please take care.

Mr. Pentz, Happy Winter Solstice and a Jolly Yule. Last night was overcast here, but the moon appeared just as Wordsworth described. Wonderful. Here's a small rhyme I found in a Christmas story by Christopher Morley. It's a companionable poem.

Have a splendid Holiday. Dip into your De la Mare and find his "Santa Claus" poem. My favorite about the jolly old elf. Cheers! JM

Stephen, so much to savour, so many delights to return to, the wonderful poetry and beautiful prose excerpt from Dorothy Wordsworth's journal as well as the paintings of John Aldridge, an artist entirely new to me. I shall return to this post again over the next week or so, calmer days ahead hopefully after a very busy and hectic few days. May I also take this opportunity to wish you a wonderful Christmas and a very Happy New Year.

Mr. Maruskin: A belated Merry Christmas to you. (And my apologies for the delay in posting, and responding to, your comment.) Thank you for the poem from Morley's story, as well as for the reference to the de la Mare poem, which I am not familiar with. I will track it down. As always, thank you for stopping by. I wish you the best in the New Year.

John: I apologize for the delay in posting, and replying to, your comment. I'm pleased you liked the post. Thank you.

Dorothy Wordsworth's journals are wonderful, aren't they? The relationship between the Wordsworths and Coleridge in those few charmed years is remarkable, and touching. (As I'm sure you are aware, it has been suggested that four lines in "Christabel" about "one red leaf, the last of its clan" that "dances" at the end of a twig at the top of a tree likely have their source in another of Dorothy's journal entries. My post of October 18, 2010, contains a discussion of an essay by Maurice Hewlett ("The Crystal Vase") which discusses this.)

I hope you had a wonderful Christmas. I wish you and your loved ones a Happy New Year.

Dear, Thank you so much for this wonderful post. walked for an hour last night around our local golf course on the edge of greater Glasgow. The course has a great hill, known as heart attack hill by locals,which leads to the most wonderful view of snow covered bills. The clouds and a full moon were so beautiful together, and so close. Reading these wonderful poems this morning was so moving. Happy New Year when it comes, and to all your readers. Thank you so much for your posts.Arthur

Arthur: Thank you very much for your kind words about the post and the blog. The walk near the golf course sounds lovely. Walks such as the one you describe are always a blessing, but even more so in times such as these.

Thank you for visiting. I hope you'll return soon. Happy New Year to you as well.