In my previous post, we visited my favorite April poem: Patrick Kavanagh's "Wet Evening in April."  A poem haunted by melancholy. But a serene and peaceful melancholy, a lovely melancholy.  This is never a bad thing.  Like April.
May is a different matter.  As it happens, Kavanagh wrote a fine short poem about May as well:
Consider the Grass Growing
Consider the grass growing
As it grew last year and the year before,
Cool about the ankles like summer rivers,
When we walked on a May evening through the meadows
To watch the mare that was going to foal.
Patrick Kavanagh, Collected Poems (edited by Antoinette Quinn (Penguin 2004).  The poem was first published in The Irish Press on May 21, 1943.  Ibid, page 271.
In May we enter the green world again.  The meadow grass sways in green waves.  The tunnels of trees continue their annual interlacing, each tree extending its boughs a bit each year, as overhead the green grows deeper.  And, as I report here every May, the ants have once again commenced their kingdom building, burrowing away in the darkness, erecting pyramids of sand in the green world above. 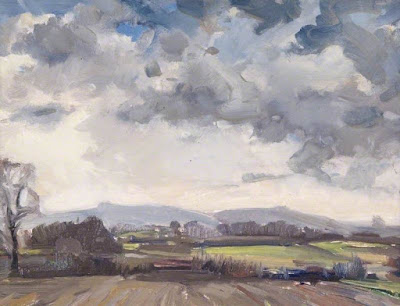 Gilbert Adams (1906-1996), "The Cotswolds from Park Leys" (1958)
I am quite fond of "Consider the Grass Growing."  But, as I have noted here in the past, this is my favorite May poem:
The Trees
The trees are coming into leaf
Like something almost being said;
The recent buds relax and spread,
Their greenness is a kind of grief.
Is it that they are born again
And we grow old?  No, they die too.
Their yearly trick of looking new
Is written down in rings of grain.
Yet still the unresting castles thresh
In fullgrown thickness every May.
Last year is dead, they seem to say,
Begin afresh, afresh, afresh.
Philip Larkin, High Windows (Faber and Faber 1974).
Larkin's "unresting castles" always bring to mind my favorite November poem, Wallace Stevens' "The Region November."  The two poems seem made for each other.  Both consist of twelve lines.  In both, trees "thresh" and "sway."  And, wonderfully, their final lines echo one another with lovely triple repetitions.  "Begin afresh, afresh, afresh."  "The trees are swaying, swaying, swaying." 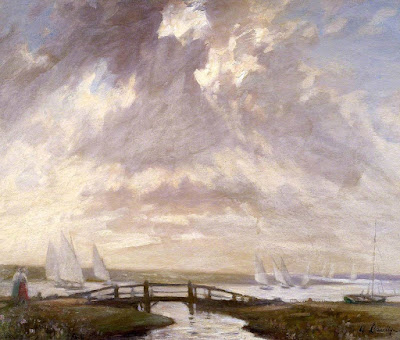 Samuel Llewellyn (1858-1941), "Sailing at Blakeney (c. 1938)
In May, a bright yellow-green inch-long or so spray of soft needles emerges at the tip of each twig on each branch of certain types of pine trees. "Nature's first green is gold."  In the midst of my seventh decade, I often think that I have spent most of that time sleepwalking through the World.  How long it took for me to take notice of those soft green needles!
I was again shaken out of my sleep yesterday afternoon.  As I walked beneath a madrona tree, tiny white berries pattered down around me from the boughs overhead.  But they weren't berries.  I picked one up and discovered it was a flower: a creamy-white, bell-like hollow globe, about a quarter-inch or less in diameter.  The flowers had fallen from large clusters high up in the tree.
Reciprocity
I do not think that skies and meadows are
Moral, or that the fixture of a star
Comes of a quiet spirit, or that trees
Have wisdom in their windless silences.
Yet these are things invested in my mood
With constancy, and peace, and fortitude,
That in my troubled season I can cry
Upon the wide composure of the sky,
And envy fields, and wish that I might be
As little daunted as a star or tree.
John Drinkwater, Tides (Sidgwick & Jackson 1917).
A haiku written by Bashō is prefaced by a headnote which consists of "a sentence that often appears in Taoist classics, although Bashō probably took it from a poem by the Confucian philosopher Ch'eng Ming-tao."  (Makoto Ueda, Bashō and His Interpreters: Selected Hokku with Commentary (Stanford University Press 1991), page 153.)  The headnote is this: "As we look calmly, we see everything is content with itself." 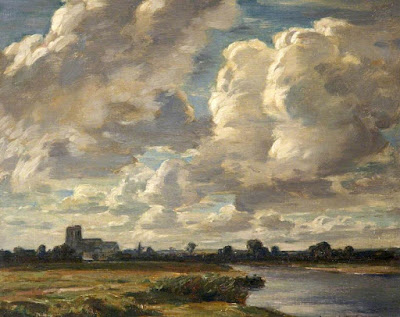 Below is a little poem by Emily Dickinson, in which she speaks of summer as having two beginnings. At first a reader might find this odd to speak of summer beginning twice. But of course she is speaking not of "official summer" alone but of also Indian summer. She knows that Indian Summer lacks the "riot" of authentic summer, but it is, she implies, more profound, tinged with melancholy, probably because the glory days of Indian summer are a portent, a ruse, if you will, to conceal the inevitable arrival of a cold New England winter, which is a gelid siege not to be lifted until the arrival of May. My reading of the poem is that she compares the seasons to deciduous trees: their leaves blaze good and yellow and read during Indian Summer, but come May the tress are once again, a promise of nature, laden with leaves. Of course we humans are deciduous only once and when we lose our leaves ("I have lost all my leaves," cries Anthony Hopkins in the film "The Father," when he is lost and bewildered in the late stages of Alzheimer's) we will find no Indian summer to resurrect us. Of course my interpretation of the poem may be off. All I know for sure, Steve, is this: the river birch outside my study window which spent the winter naked, unclothed against winter, is now a green example of sartorial elegance, a profusion of leaf-laden boughs that block my view of the sky.

Without, perhaps, the Riot
But graphicker for Grace —
As finer is a going
Than a remaining Face —

Bruce: Thank you very much for the wonderful poem by Dickinson, and for your thoughtful meditation on the poem, on the seasons, and on life. I completely agree with your thoughts about Indian Summer, both as viewed by Dickinson and through your own eyes. I remember it well from my childhood in Minnesota, and you and Dickinson capture the feelings it evokes perfectly. There are few things more beautiful, heart-catching, and sigh-inducing, are there?

What can one say about "Forever is deciduous/Except to those who die --"? One should just stay silent. However, I will repeat something that I have said here in the past: the thought that the trees and all the beautiful particulars of the World will continue their yearly round long after we have turned to dust can be a source of serenity and peace.

As ever, it's a pleasure to hear from you. Thank you so much for sharing your thoughts. Take care.

I've been thinking about this Larkin poem recently, and like many of his, it conceals a great deal: the qualifications ('almost', 'seem', etc) seem like a direct challenge to the evidence of the tree's growth. He does this qualification trick in many poems- notoriously with the two usages of 'almost' in the penultimate line of 'An Arundel Tomb': many, many people quote the final line as a kind of comfort without noticing these strictures on the conclusion. Larkin is a tricksy writer!

Thanks for your thoughts, and for the Drinkwater poem, which is terrific and new to me. Best wishes,

Mr. Caseley: It's good to hear from you. Thank you for stopping by again.

Yes, Larkin's "qualification trick" is at the heart of a great many of his poems, isn't it? I agree that "An Arundel Tomb" is the finest instance. Your thoughts immediately brought to mind something Larkin wrote about Edward Thomas in a letter to Andrew Motion (Motion had asked him to review a typescript of Motion's book on Thomas): "What a strange talent his was: the poetry of almost infinitely-qualified states of mind, so well paralleled by his verse." (Letter of May 16, 1979.) (Another reminder of what a wonderfully acute critic Larkin was.) Of course, Larkin might be speaking of himself as well. And, as I'm sure you know, there is also a third fine poet fond of the "qualification trick" (no wonder he and Thomas were such good friends): Robert Frost.

I'm pleased you liked "Reciprocity": it has always stayed with me. I suppose Drinkwater is mostly known now (if at all) for "Moonlit Apples," but he wrote a number of lovely poems.

Again, thank you very much for visiting, and for sharing your thoughts. Take care.